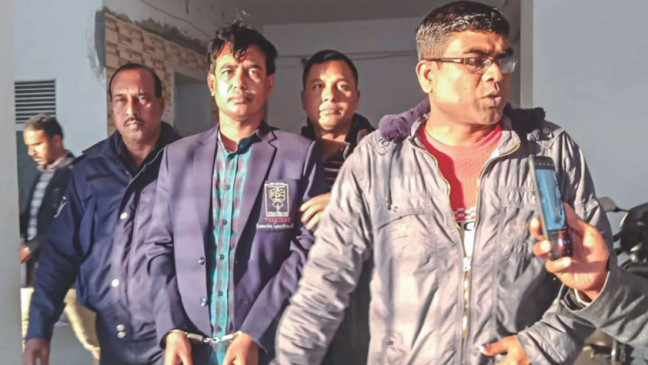 District Judge Moshiur Rahman Chowdhury passed the order in the afternoon after which Hedait walked out of Khulna jail around 6:45pm.

Speaking to The Daily Star, Masum Billah, one of Hedait's lawyers, said his client was given ad-interim bail which will be effective until January 14.

Some five to six lawyers, including Masum and Tariq Mahmud, represented Hedait during the hearing yesterday.

Hedait was arrested on January 1, a day after the case was filed against two reporters, including him, with Batiaghata Police Station in the district.

The other accused is Rashidul Islam, staff reporter of the daily Manab Zamin, reports our Khulna correspondent.

The case statement said the accused published false, fabricated and provocative information on the voting with the use of electronic devices, including laptops, which might confuse people and create a chaotic situation.

The Committee to Protect Journalists (CPJ) on Wednesday called on the Bangladeshi authorities to immediately release Hedait.

Quoting media reports, the CPJ said, Hedait and Rashidul both reported the initial election results of a certain constituency that indicated the number of votes cast was higher than the number of total voters.

An election officer later asserted that this had been a mistake, but the reporters had already published their stories.

The police report said that their articles were "false information that was made intentionally to make the election result seem questionable and controversial," according to Reuters.

CPJ's phone call to Batiaghata Police Station, where the case was filed, went unanswered on Wednesday.

In Washington, DC, CPJ Asia Programme Coordinator Steven Butler said, "Arresting a journalist for reporting on alleged election irregularities and raising legitimate questions is a disappointing way for Prime Minister Sheikh Hasina and the Awami League party to respond to their re-election.

"The government should reaffirm its commitment to democratic values and refrain from abusing the Digital Security Act to attack press freedom."

The High Court today granted anticipatory bail to Rashidul Islam, the daily Manab Zamin’s staff reporter for Khulna, for four weeks in a case filed under the Digital Security Act.

The case statement said the accused published false, fabricated and provocative information during polls on December 30 regarding the use of electronic devices including laptops, which might confuse people and create a chaotic situation.

The HC bench of Justice Muhammad Abdul Hafiz and Justice Mohi Uddin Shamim granted anticipatory bail to Rashidul in his presence after hearing a petition filed by Rashidul seeking bail in the case.

The court also asked Rashidul to surrender before the trial court concerned in four weeks in connection with the case, Deputy Attorney General Rafi Ahmed.

Earlier on January 3, a Khulna court granted bail to Hedait in the same case.

Hedait was arrested on January 1, a day after the case was filed against them.

He was arrested from Bolirhat area under Chandgaon Police Station in the city, said Major Mehedi Hasan, deputy director of Rab-7.

The Rab official said Helal has been posting derogatory comments and distorted photos of PM and Roads Transport and Bridge Minister Obaidul Quader from his Facebook ID over a long time.

“Scrutinising his social media ID, it is apparent that he is a supporter of BNP,” Major Mehedi said, adding that he was handed over to Chandgaon Police Station for the next course of action.

Pushkin was arrested from his home at Naruli Moddhyapara of Bogura Sadar upazila, said Assistant Superintendent of Police SM Jamil Ahmed, also an official of Rab-12.

“We arrested him based on secret information that Pushkin has been spreading propaganda and false information against government, high ranked-government officials and army for a long time,” he said.

Rab also seized two mobile phones and 17 screenshots of his Facebook shares and messenger during the raid, Jamil Ahmed also said, adding that the arrestee has been handed over to Bogura Sadar Police Station.

A case under Digital Security Act was also filed with the police station against him, he added.

SM Bodiuzzaman, officer-in-charge of the police station, confirmed the development to The Daily Star.

He was arrested from his home for spreading false images which were used to propagate unrest, the press release added.

The recent visit to Bangladesh by UN human rights chief Michelle Bachelet attracted quite a significant amount of interest among rights activists globally, as it came after her controversial trip to China in May. She went to China despite opposition from rights activists and the United States, which expressed concerns that she would not have unfettered access to the people subjected to alleged torture and intimidations. Later, on June 15, she told the Human Rights Council that she was unable to meet the detained Uyghurs. Some of these activists expressed concerns that her Dhaka visit could be used by the government, who faces criticism for widespread abuses and repressive laws, in claiming that it had nothing to hide.

Prior to her Dhaka trip, nine human rights organisations, including Human Rights Watch (HRW), issued a joint statement on August 10, urging the UN rights chief to publicly call for an immediate end to serious human rights violations, including torture and disappearances. They claimed that if the high commissioner failed to clearly condemn these abuses and seek reform, the ruling Awami League could use her silence to legitimise its abuses and undermine activists. These groups alleged that "hundreds of Bangladeshis have been forcibly disappeared, tortured, and killed since the government led by Prime Minister Sheikh Hasina first took office in 2009."

They have also appealed to the UN High Commissioner that she should encourage the Bangladesh government to create an independent commission of inquiry to investigate all allegations of enforced disappearances, torture, extrajudicial killings and custodial deaths, and offer the support of her office to form such a commission. The joint statement said she should make clear to the government that the ongoing security force abuses would jeopardise the deployment of Bangladesh troops to UN peacekeeping operations. When the high commissioner met representatives of civil society and the victims' families, they pressed her for a UN mechanism to investigate these allegations as, according to them, our judicial system has lost its independence and become politicised.

It is well-known that about a dozen requests from special rapporteurs and experts from various UN mechanisms have been pending for years, as those visits are seen to be something akin to fact-finding missions. So, it was a curious development that the government was eager to host the outgoing High Commissioner Bachelet. Why did the government want such a visit?

DS View: Embarrassing the PM to the core

Foreign Secretary Masud Bin Momen explained it well to Prothom Alo, "Bangladesh is one of the candidates for the United Nations Human Rights Council membership election. Therefore, there is a need for discussion and communication at various levels of the council. Many have misconceptions and complaints about contemporary issues such as disappearances, extrajudicial killings and digital security laws. All the complaints about these things reported in the media are not correct. As a result, we hope that the high commissioner will understand the situation better by talking to the law minister, the foreign minister and the home minister. If there is a violation of the rules in these matters, what measures we have taken will be presented to her. From this point of view, we see this visit as an opportunity to explain our position"(August 14, 2022).

Expectations on the part of the government and the rights groups could not have been more contrasting. And the statement made by Bachelet at the end of the visit – perhaps the only public one – now makes clear whether or how much of those conflicting expectations have been met. Bachelet's statement commends the government's achievements in socioeconomic development, poverty eradication, increasing access to education and healthcare, reducing women's and children's mortality, and increasing access to food, water and sanitation. But not once did the nine-page statement mention Bangladesh as a democracy. Instead, it noted, "Democratic and civic space, as well as effective checks and balances and accountability, are essential as Bangladesh aims for the next levels of development." Perhaps the argument made by some civil society representatives that the government had lost its democratic credentials through disenfranchising its citizens during the last two parliamentary elections was too convincing. And it could be the reason that prompted her to call for national dialogues among political parties and others ahead of elections.

The most important intervention, on her part, in the conflicting claims and counterclaims on extrajudicial killings, enforced disappearances and tortures was her call for an impartial, independent and transparent investigation into the allegations and the support she offered from her office, the Office of the High Commissioner of Human Rights (OHCHR) in this regard. Discarding ministers' narratives that deny these grievous violations as propaganda by political opponents, she said, "Various UN human rights mechanisms, including the UN Committee Against Torture, have been raising concerns for several years." She also spoke about the involvement of the Rapid Action Battalion (Rab) in those alleged abuses and violations. Against the backdrop of US sanctions against Rab on the same charges, her concerns add further gravity to the issue. She also called for inviting the UN Working Group on Enforced Disappearances to visit Bangladesh, arguing that it would show a commitment to decisively address this issue. Her insistence that Bangladesh should ensure it has a robust system in place for the careful human rights screening of security personnel is a reminder that it needs to think about the future of UN peacekeeping missions.

Michelle Bachelet's disclosure that her office has put forward recommendations to the government for essential amendments to the Digital Security Act (DSA) to remove barriers on freedom of expression and ensure international human rights standards and obligations means that the government needs to act soon. She also reminded the government of the importance of working closely with civil society and the UN to ensure that the proposed data protection law and the OTT (over-the-top) platform regulations meet international human rights standards.

Prior to her visit, BNP and the families of missing persons demanded a UN investigation following the release of an investigative documentary on enforced disappearances by Sweden-based news portal Netra News, titled "Secret Prisoners of Dhaka (Aynagharer Bondi)." Though some ministers' reactions suggest that the government has realised its diplomatic blunder, it could have been much worse had Bachelet agreed to the demand for initiating the OHCHR's own investigation mechanism. Continuing to be in denial may ultimately lead us to such an undesired end.

Kamal Ahmed is an independent journalist and writes from London, UK. His Twitter handle is @ahmedka1

A court in Barishal today granted bail to poet and journalist Henry Sawpon in a case filed under the Digital Security Act.

Barishal Chief Metropolitan Magistrate Shamim Ahmed granted the bail after hearing a petition filed by him.

Police arrested Sawpon from his residence in the city on Tuesday for hurting religious sentiments.

The father of a catholic church in the city filed the case over Sawpon's Facebook post about Sri Lanka bombings.

Rapid Action Battalion (Rab-10) today claimed to have detained a man on charge of spreading rumours on social media.

Two mobile phone sets and a SIM card were also recovered from his possession, the Rab official said.

His intention was to create anarchy in the state by spreading false information, Ashraful said.

A case was filed against him under the Digital Security Act with Sutrapur Police Station in this regard.