'A glowing example for other democracies' 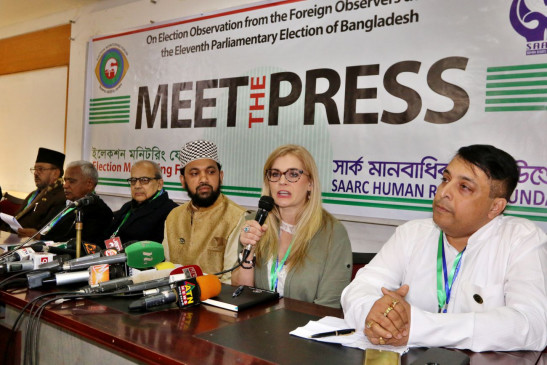 A group of foreign and local election observers, who monitored the December 30 parliamentary election, has termed the election free, fair, peaceful and on a par with major democratic countries in the world.

The foreign observers from Canada, India, Nepal and Sri Lanka, who came to Bangladesh at the invitation of  Election Monitoring Forum (EMF) and SAARC Human Rights Foundation (SHRF), also said the just concluded election was “much better” than past elections in Bangladesh and could be a “glowing example for other democratic countries”.

The foreign observers were speaking at a press conference held at Jatiya Press Club yesterday to share what they have seen during their daylong visit to nine polling centres in the capital on Sunday.

“This was a world standard election…We can compare this with the elections of major democratic countries,” said former president of Kolkata Press Club, Kamal Bhattacharya.

The senior journalist told Bangladeshi media that he had covered two past elections in Bangladesh as a reporter, and this time he came as an observer.

“I talked to a number of voters standing in queues and inside polling centres and no one told me they faced any threat, harassment or intimidation,” he said.

He said voters had trust and confidence in the Election Commission and authorities concerned that they would follow the best practices in the election; the arrangements helped voters to cast their votes smoothly and with safety.

Another observer from Nepal, Advocate Mohamadin Ali, said Bangladesh has set the best example of a high standard election.

Former minister and member of Nepal Communist Party, Hakikullah Musalman, said he was immensely impressed to see such a peaceful, disciplined and orderly election in Bangladesh.

Speaking at the press conference, Prof Mohammed Abed Ali, executive director of Election Monitoring Forum, informed that the forum is an association of 31 organisations and 26 NGOs registered under the Election Commission.

He said they deployed 5,765 observers in 214 constituencies out of 299, who visited 17,165 centres. Abed Ali said it was a peaceful election and it was far better than previous ones.

"The Jatiya Oikyafront lost its sense seeing huge public support for AL. Now, they are trying to trigger violence," he said after voting at Udayan Kindergarten polling centre in Basurhat municipality in the morning.

About 3,000 AL leaders and activists were injured until Saturday night but there is no report of injury from the opposition party, he claimed.

"The election is being held peacefully except for some stray incidents," Quader said. "I believe the voting will end peacefully ... [and] the people's expectation will be fulfilled."

Quader said he would accept the election result. "I am 100 percent hopeful about the AL-led grand alliance's victory," he said.

Besides the CEC, two ministers criticised the report.

Information Minister Hasan Mahmud said the TIB report was a “deliberate falsehood” and it echoed the speech of opposition alliance -- Jatiya Oikyafront -- regarding the December 30 polls.

On Tuesday, the TIB in its study titled “Review of Election Process of 11th National Election” said irregularities took place in 47 out of the 50 constituencies it surveyed.

It termed the polls “partially participatory, non-competitive, questionable and faulty" and demanded a judicial inquiry into the reported irregularities.

The TIB study found ballot boxes filled-up before polling even began in 20 constituencies; voters forced to cast ballots for a particular symbol in 26 constituencies, casting of fake votes in 41 seats, silence of the administration and law enforcing agencies in 42 seats and obstructing and driving out polling agents in 29 seats.

In the 50 constituencies, not all the polling centres necessarily saw the anomalies. Irregularities happened in one or more centres of a seat, the watchdog said.

“We are completely rejecting the TIB report on the election. It is baseless,” the CEC told reporters after an orientation programme of the newly appointed Election Commission officials at the Nirbachon Bhaban in the capital yesterday.

The CEC said there was no similarity of the TIB report with those published in newspapers and accounts of other observers on the voting day.

Information provided by the election enquiry committees, executive magistrates and EC officials and others on the polls also do not match the TIB findings, he said.

The CEC also slammed the TIB's allegation that the EC failed to act neutrally and the role of some polling officers and law enforcement agencies were biased, saying, “The speech is disrespectful ... They should not speak like that.”

He said the commission would not take any step against TIB over its report.

“The TIB has come up with the fairy tale long after the election,” Quader told journalists after an extended meeting of Dhaka South City unit Jubo League at AL's central office on the Bangabandhu Avenue.

“The TIB has cooked up so many imaginary and unbelievable stories. The countrymen will give a reply to the report.”

He termed the December 30 election transparent and excellent.

“Did any agent of BNP and Oikyafront candidates make any objection about the transparency of the election on the voting day?” Quader questioned.

In another development, Information Minister Hasan Mahmud said, “There is no difference between the TIB    report and the speech of the Oikyafront. In fact, the TIB just published a report in favour of BNP and Jamaat-Shibir.”

He was addressing a press conference in his Dewanji Pukur Par lane house in the port city yesterday, reports a staff correspondent in Chattogram.

The minister added that though the TIB usually claimed that its reports were based on research findings. But in fact, no proper research was actually done.

The press conference will be held at his Paltan office after 8:00pm today, the party sources said.

Earlier at a press briefing around 2:30pm, Oikyafront convener Dr Kamal Hossain said he was concerned over the election atmosphere.

The voting in the 11th parliamentary election ended in all the 300 constituencies across the country at 4:00pm.