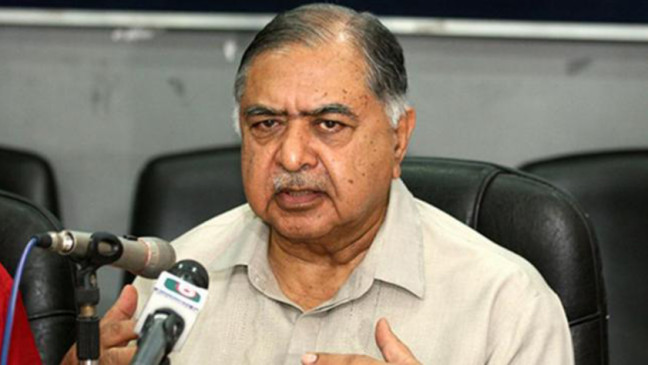 Raising alarm at the growing incidents of rape in the country, Jatiya Oikyafront convener Dr Kamal Hossain today urged people to forge a united movement to protect women's rights and establish the rule of law.

"Unwanted incidents are taking place in the country one after another. The rape of women has turned epidemic. The deterioration in law and order is evident here," he said while talking to reporters after a meeting of the alliance at his Motijheel chamber.

Dr Kamal, also Ganofourm president, further said, "We think the movement has to be strengthened and we've to take to the street actively so that people's rights are protected and the rule of law is established. It's now essential."

Oikyafront leader ASM Abdur Rob said they will hold a mass gathering at Shahbagh intersection in the city on April 30 in protest against the repression of women and rape.

Prime Minister Sheikh Hasina today said a group of political parties joined hands with the BNP-Jamaat alliance to try to oust her government and push the country into an era of darkness again.

Hasina, also president of the ruling Awami League, was speaking at the opening of a weeklong programme marking the golden jubilee of Bangladesh Krishak League's founding anniversary.

The programme was held at Krishibid Institution, Bangladesh while the prime minister joined it virtually.

"What is their motive behind wanting to oust the government?" – she asked. "(It is just) to deprive the people from all the facilities that are being given by the government," she said.

She said that there are some political leaders in the country who never stand by the people during any crisis, but are busy talking about movements to oust the Awami League government.

"What is Awami League government's fault? Why do they want to oust it?" she wondered.

"In that manifesto we had declared Vision 2021. I am expressing my gratitude towards the people of the country for electing us repeatedly," she said.

She also said that the government has attained the targets declared in the party's election manifestoes.

"We have promoted our country from least developed to developing, while we were celebrating the birth centenary of the Father of the Nation Bangabandhu Sheikh Mujibur Rahman and the golden jubilee of our independence," she said.

Referring to her critics, she again wondered why they don't like Bangladesh's graduation to a developing country.

She said that the government has taken steps to change the fate of all people, including those in the grassroots.

The PM said that the government has given importance on the research on agriculture so that the country gets more positive results in food production along with other related issues.

A video documentary on Krishak League was screened at the programme.

Gonoforum President Dr Kamal Hossain today said those making their own fortunes depriving people of their ownership of the country and voting rights using the name and portraits of Bangabandhu are committing the 'most grievous crime'.

"They (AL) are using the name and portraits of Bangabandhu, but indulging in acts contrary to his ideals. I think it's the most grievous crime to work against Bangabandhu's ideal and dreams using his name," he said.

Speaking at a discussion, Dr Kamal further said, "Instead of exercising people's power in protecting their interests, they (AL) are making their own gains showing his photos and using his name. It's completely contrary to Bangabandhu's dreams. So, we should make people understand what Bangabandhu's real dreams were. Then, they'll put up a resistance against the abuse."

Gonoforum arranged the discussion at the Jatiya Press Club on the occasion of National Mourning day commemorating the 44th martyrdom anniversary of Father of the Nation Bangabandhu Sheikh Mujibur Rahman.

Dr Kamal, a close associate of Bangabandhu, said the Father of the Nation had struggled throughout his life for establishing pure democracy and making people owners of the country.

"If anyone thinks the country's power and ownership belong to an individual and a party it will be tantamount to disrespecting Bangabandhu and defying his instruction. Because, he made people owners of the country through the constitution signed by him," the Gonoforum chief said.

He said Bangabandhu even could not imagine an autocratic regime would rule Bangladesh. "Those who want to deprive people of their ownership of the country deviating from Bangabandhu's dreams are bound to fail."

Dr Kamal said those who are now exercising power, even at the grassroots level, are not elected with people's votes. "They're making their own fortunes instead of protecting people's interests. They're depriving people of their rights and power."

Referring to the December-30 national election, he said people were deprived of their voting right. An election system has been established which is completely opposite to a free and fair election.

Dr Kamal said Bangabandhu clearly defined in the constitution that democracy means a system where people at all levels will be the owners of the country, and all the representatives will be elected through people's votes in a credible election. "But his instruction has been ignored completely."

The Gonoforum president said those usurped power and indulging in plundering abusing power are not owners of the country. "People's ownership of the country will be ensured if they can freely exercise their voting rights through a fair and credible election."

He recalled that late autocratic ruler HM Ershad had tried to stay in power for a longer time, but he was ousted through a united and fierce movement.

The Gonoforum chief urged people to get united to realise their rights, restore their ownership of the country and materialise the dreams of Bangabandhu.