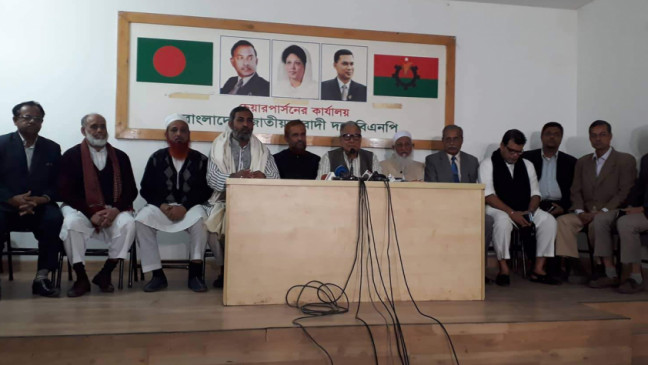 BNP-led 20-party alliance has appealed to President Abdul Hamid to appoint a neutral person as the chief election commissioner ahead of the upcoming December 30 general election.

The alliance made the appeal after a meeting at BNP Chairperson Khaleda Zia’s Gulshan political office around 12:15pm.

“The incumbent CEC has not taken any steps even after he was informed about specific instances of attacks and intimidation on the opposition men by the ruling quarter ahead of the polls,” BNP Standing Committee member Nazrul Islam Khan said at a briefing after the meeting.

“Even, the CEC has spoken in favour of the attackers,” he alleged. Under such circumstances, it is necessary to replace him with a neutral person for the sake of holding a fair election, the BNP leader added.

The 20-party leaders also called upon the army to take necessary steps to ensure a free and fair election.

Claiming that there is no level playing field in the country at this moment, Nazrul Islam said, “the government and Election Commission had assured us of a fair election, but there is no visible sign of keeping their word”.

“We have noticed how Goyeshwar (BNP Dhaka-3 candidate Goyeshwar Chandra Roy) came under attack and how detectives detained Jhenidah-3 candidate and his wife despite all the assurances of level playing field,” he said.

Bringing allegation that the ruling quarter is not allowing the country’s democracy to move in its own course, the alliance leaders said alleged that the victims become the culprits while the attackers become innocent under the government tenure.

Awarded freedom fighters are also being attacked at different parts of the country, they also alleged.

Awami League acts only for the sake of the party, not in favour of the spirit of Liberation War, they added.

He came up with the remark after holding a meeting with law enforcers at Nirbachan Bhaban in Dhaka over the upcoming Rangpur City Corporation polls.

“All sorts of steps will be taken to hold a free, fair and acceptable election,” he said adding that there is nothing to worry about the atmosphere of polls.

Asked about the deployment of army in the polls, the CEC said the issue was not discussed at the meeting as no one proposed for it.

Huda said more than 3,500 members of different law enforcing agencies including police, Rab, APBN and Ansar will be deployed in the district during the polls scheduled to be held on December 21.

Protesting a Facebook post, hundreds of zealots attacked Thakurpara village in Rangpur on the afternoon of November 10. They torched 11 Hindu houses, vandalised many others and looted valuables from there.

A man was killed and about 20 others were injured after police fired rubber bullets and teargas shells to bring the situation under control.

In a news report, the Associated Press said it received more than 50 calls from people across Bangladesh, who identified themselves as opposition supporters.

They complained of intimidation and threats, and being forced to vote in front of ruling party men inside polling booths, it mentioned.

"Hasina's use of the state machinery to subjugate the opposition virtually ensures her electoral victory," Sasha Riser-Kositsky, a South Asia analyst for the New York-based Eurasia Group, told AP.

Minutes before the polls opened, a BBC correspondent saw filled ballot boxes at a polling centre in Chittagong city. The presiding officer declined to comment.

Only the ruling party's polling agents were present there and several other polling centres in the port city.

BBC's South Asia Regional Editor Anbarasan Ethirajan said if the opposition's claims of widespread vote rigging are proved, then it will likely to raise questions over the credibility of the election process and the legitimacy of the new government, according to a BBC report.

The Guardian in its report headlined “Bangladesh opposition reject 'farcical' election and demand new vote”, mentioned that dozens of candidates pulled out, claiming the ruling Awami League rigged the country's first contested election in a decade.

The Election Commission told Reuters that it was investigating allegations of vote rigging coming from across the country.

“Allegations are coming from across the country and those are under investigation,” SM Asaduzzaman, a spokesman for the EC, told the news agency.

The Economic Times of India reported that the voting in a tense election to choose a new government in Bangladesh ended amid allegations of manipulations by ruling party men.

The Times of India highlighted the introduction of EVMs in six parliamentary constituencies for the first time in a general election, a move which received mixed responses from the voters amid reports of glitches at some booths.