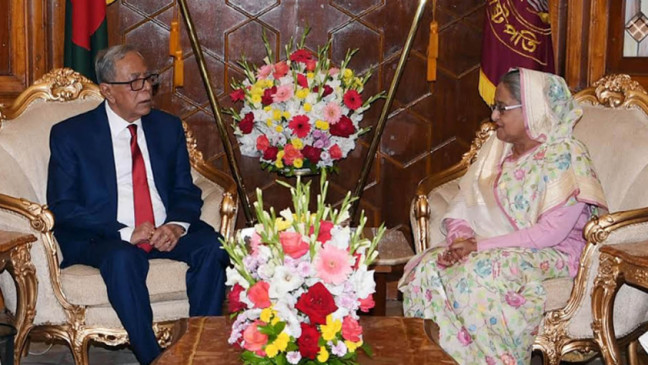 President Abdul Hamid has invited Awami League President Sheikh Hasina to form government as she has gained the confidence of the majority of the members of the Parliament.

The invitation came after the current Premier Sheikh Hasina went to meet him at the Bangabhaban this afternoon, said Press Secretary to the president Joynal Abedin.

Earlier, Sheikh Hasina was unanimously elected chief of the Awami League Parliamentary Party (ALPP) for the 11th Jatiya Sangsad during the first session of ALPP this afternoon.

President Abdul Hamid and Prime Minister Sheikh Hasina today paid tributes to the martyrs of the Liberation War by placing wreaths at the National Memorial marking the 49th Victory Day.

After placing the wreaths, the President and the Prime Minister stood in solemn silence for some time as a mark of profound respect to the memories of the martyrs of the War of Liberation in 1971.

A smartly turned out contingent drawn from Bangladesh Army, Bangladesh Navy and Bangladesh Air Force presented a state salute on the occasion when bugles played the last post.

Flanked by senior leaders of the party, Sheikh Hasina, also the president of ruling Awami League, laid another wreath at the National Memorial as the party chief.

The nation is celebrating its 49th Victory Day, marking the most precious day when Bangladesh was liberated from Pakistani occupation after a nine-month war through the supreme sacrifice of three million martyrs and the honour of 2, 00,000 women.

Bangladesh was born as an independent country on this day under the leadership of Father of the Nation Bangabandhu Sheikh Mujibur Rahman.

Condemning violence in Bangladesh, the United Nations has urged all sides to show restraint and ensure a peaceful post electoral environment in the country.

The USA and the European Union have also denounced violence over the just concluded parliamentary elections, and called for addressing all electoral complaints in a peaceful manner.

Welcoming the participation of all major political parties in the general election for the first time in 10 years, they said it was a positive development which reflected aspirations of people for democracy.

The spokesperson for UN Secretary-General Antonio Guterres in a statement on Monday said, “The United Nations is aware of violent incidents and reports of irregularities in the Bangladesh general election.”

The UN regretted the loss of life and injuries sustained by candidates and voters during the electoral campaign and on the voting day, it said.

The US in a statement yesterday commended the Bangladeshis who voted in the election as well as the decision of all major opposition parties to participate.

However, it expressed concern over reports of harassment, intimidation, and violence in the pre-election period saying that those incidents made it difficult for many opposition candidates and their supporters to meet, hold rallies, and campaign freely. “We are also concerned that election-day irregularities prevented some people from voting, which undermined faith in the electoral process.”

He said his country strongly encourages all parties to refrain from violence and request the EC to work constructively with all sides to address claims of irregularities.

“Bangladesh's impressive record of economic development and respect for democracy and human rights are mutually reinforcing, and we look forward to continue working with the ruling government and opposition towards advancing these interrelated goals,” reads the statement.

The EU said the mobilisation of voters and the participation of the opposition in the polls reflected the people's aspirations for democracy.

“However, violence has marred the election day, and significant obstacles to a level playing field remained in place throughout the process and have tainted the electoral campaign and the vote,” an EU spokesperson said in a statement yesterday.

Maja Kocijancic, spokesperson for foreign affairs and security policy of the EU, in his statement said the relevant authorities should now ensure a proper examination of allegations of irregularities and commit to full transparency in their resolution.

President Abdul Hamid yesterday called for mounting pressure on Myanmar from across the world to take back the forcibly displaced Rohingyas from Bangladesh.

He was addressing a global security summit on the sidelines of the World Investment Forum-2018 here.

"The case of the Rohingya Muslims in Myanmar may be considered as an acid test for the global community to collectively deal with an international problem and a test case for any future international cooperation on peace and security," Hamid said.

He urged the international community to arrive at a durable solution and stop the process of impunity by identifying the persons responsible for the acts of violence.

"We all are appalled by what we have seen in the UN reports about the horrifying atrocities committed against them [Rohingyas] which tantamount to genocide and crimes against humanity… and we are trying to do our best in our ability to provide food, shelter, clothing, healthcare, childcare and above all, the sense of security."

The president delivered his speech on "The hardening of international relations: A risk to peace and security" at the opening session of the 20th Homeland and Global Security Forum at Grand Hotel Kempinski in Geneva.

Hamid is now on a five-day official visit to Geneva to attend the World Investment Forum-2018.

Observing that the rise of terrorism and extremism along with proliferation of weapons of mass destruction and trans-national crimes were pushing the humanity to the edge, the president said local or regional conflicts abound in all parts of the world and some countries were seen taking different sides instead of putting pressure on the opposing sides.

He stressed the need for concerted efforts involving all countries to face new security threats like cyber attack and cope with the adverse impacts of climate change-induced disasters.

"Peace has now become more than absence of war and the traditional definition of security has changed forever. Now we also have powerful non-state actors to influence the international politics to make the matter worse.

"As the Fourth Industrial Revolution has presented us with an unparalleled prospect of development, at the same time the humanity is also faced with probably the greatest dangers and existential threats in all its known history," he said.

Noting that the world must feed more than 9 billion people by 2050, he said it was not prepared for that as malnutrition and hunger were still ruling many parts of the world.

"The rise of nationalist identity-based politics set by different countries along with lack of trust are directly impacting activities of different multilateral organisations and their peace-building efforts… absence of trust and lack of collaboration are on the rise," he said.

President Hamid exchanged greetings with the heads of the states and representatives of different countries.