Says CEC about its role in December 30 polls 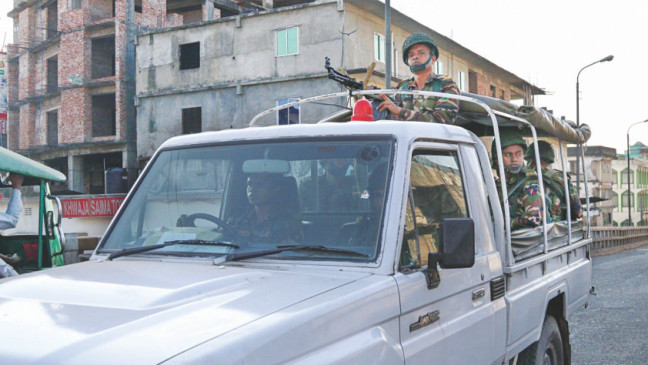 “If any situation that needs to be controlled arises in front of the army, they will go there on their own and bring the situation under control," he said.

The army personnel have been deployed to restore voters' confidence, Huda said, urging all the political parties to maintain a congenial atmosphere for the December 30 election.

He made the comments while visiting a trial voting session on using electronic voting machines (EVM) at Dhaka Residential Model School and College.

Army personnel started discharging election duties yesterday to help ensure a peaceful atmosphere and maintain law and order across the country for the polls.

The CEC urged all the political parties to ensure that the election was held the way it should be. He also asked them to shun violence, remove “misunderstandings” and dedicate themselves only to electioneering.

In this regard, the army's role would be helpful, he pointed out. “I do believe, from now on, anything untoward will be controlled.”

Responding to a query, Huda said Election Commission officials would be in charge of operating the EVMs while skilled army personnel would assist them.

Asked if the BNP would be allowed for a rally at the capital's Suhrawardy Udyan on Thursday, he said he would communicate with the Dhaka Metropolitan Police over the matter.

'NOTHING TO BE DELIGHTED ABOUT'

"The army has taken positions in districts to discharge duties for the sake of a free and fair election. A quarter is much delighted over the army deployment. But they should remember that they [Army] would not work for any particular party. Their role will be neutral,” he said.

Quader urged all not to make the army controversial.

Yesterday, the AL also sought steps from the EC to stop “attacks on its activists across the country during campaigning”.

He hoped that the polls environment would improve as members of the armed forces were deployed.

Meanwhile, Islami Andolan Bangladesh lodged a complaint with the EC, saying its activists were facing attack and harassment across the country, said the party's Senior Joint Secretary General ATM Hemayetullah.

“The agents must have strength to persist…They shouldn’t leave whenever anyone asks,” the CEC said after a reporter drew his attention to allegations that polling agents of BNP-nominated mayor candidates were being driven out.

Nurul Huda was briefing reporters after casting his vote around 11:30am at IES school and College at Uttara.

“We did not receive any direct complaint that agents are being driven out,” he said.

Asked whether polling agents should resist if they face difficulties, the CEC said, “They should. I think so…Primarily he/she should resist whenever anyone asks them to leave.”

The CEC told the polling agents to ask for assistance from presiding officers and members of law enforcement if they were threatened or driven out.

Returning officers will take steps if they receive allegations, he said, adding “We will stop voting if situation of a centre goes beyond control.”

At the briefing, he, however, said the voter turnout till then was not satisfactory and hoped that it would pick up soon.

The CEC expressed his satisfaction over the overall election situation.

A BNP delegation today met Chief Election Commissioner KM Nurul Huda and alleged of having no level-playing field ahead of the upcoming Dhaka north and south city corporation elections scheduled for February 1.

“Ruling party candidates are campaigning by setting up camps on footpaths, roads and by putting up posters and banners across the city -- violating the electoral code of conduct,” BNP Standing Committee Member Amir Khasru Mahmud Chowdhury told reporters after holding a meeting with the CEC at his Election Commission office in Dhaka this afternoon.

Claiming that the level-playing field is still elusive, Amir Khasru said the ruling party lawmakers and ministers are taking part in the campaigns of their candidates by breaching all sections of the electoral code of conduct.

“Awami League activists are attacking our candidates but no action is being taken against them, rather our party men are facing cases. There is no security for our candidates,” he added.

Alongside, the Awami League men are removing BNP candidates’ publicity materials like posters and banners across the electoral areas, the BNP leader said.

He also criticised the activities of the executive magistrates who were deployed to monitor the violation of the electoral code of conduct and said their activities are not visible.

“Our candidates are abiding by the electoral code fully while Awami League men are breaching the code,” Amir Khasru alleged.

He also blasted the Election Commission for allowing some observer groups and said they will work in favour of a party in the election and on election day they will say the vote was held in a free and fair manner.”

“Don’t let the election to be questionable,” he said during a coordination meeting at Nirbachan Bhaban arranged today ahead of the polls.

“Our parliamentary election was exemplary in the aspects of free and fairness,” he said. “We expect the same atmosphere in upazila and city polls.”

He instructed the law enforcing agencies to provide security to the voters and agents of different political parties during the voting process.

The CEC also praised the role of police force in curbing untoward situation during the national election and instructed the same vigilance in the upcoming elections.

Reflecting on major parties like BNP boycotting the upazila parishad polls, he said: “We can’t do anything if all parties do not participate. Still, we hope the election will be competitive.”

Among others present in the meeting were principal staff officer of the armed forces, inspector general of police, director general of Rapid Action Battalion, high-ups of the intelligence units and other ministry officials.

To be noted, the by-elections to Dhaka North City Corporation will be held on February 28.

Chief Election Commissioner KM Nurul Huda yesterday said he wanted the upcoming by-polls to Dhaka North City Corporation mayoral post and councillor election to the 36 new wards under the DNCC and the DSCC to be free and fair.

“The 11th general election was held in a fair manner. We want the Dhaka city corporation elections to be held like the national election,” he said.

Huda made the comment while briefing returning officers and executive magistrates, who will carry out election duties for the February 28 polls, at his office in the capital's Agargaon.

The CEC thanked all returning officers and executive magistrates for performing their duties during the December 30 election.

“I congratulate you and all your colleagues across the country for their hard work, skills and gifting the nation a fair election,” he said.

Huda said if the officers and the magistrates could ensure that the electoral code of conducts was properly followed, most of their duties would be performed. “Who will win the election is none of your concern.”

“People love you and they have confidence in you. Because of this, you have to ensure that the electoral rules are followed,” he told the officers and the magistrates.

“I am sure you will not do any irregularities. There is no doubt that you won't compromise with neutrality,” he added.

According to the polls schedule, the last day for filing nomination papers for the election to the 36 new wards -- 18 under the DNCC and 18 under the Dhaka South City Corporation (DSCC) -- is January 30.

The returning officers will scrutinise the nomination papers on February 2, and the last date for withdrawing candidacy is February 9.

Main opposition BNP today claimed that over 9,200 of its activists were arrested since the declaration of election schedule on November 8.

“Our activists were sued in 806 ghost cases since then,” Ruhul Kabir Rizvi, senior joint secretary of the party, said at a press conference at Nayapaltan.

He claimed, 12,588 activists of BNP and its alliance Jatiya Oikyafront were injured in 2,716 incidents of attacks throughout the country in the last 22 days.

So far, eight opposition activists have been killed in election violence, he added.

“The government is applying all its power to oust BNP and Jatiya Oikyafront from the election,” Rizvi claimed. “Our activists are targeted from rally footages.”