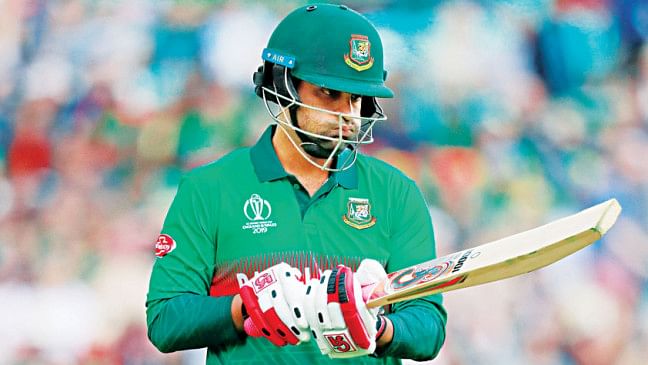 Star Bangladesh opener Tamim Iqbal took it upon himself to have a practice session at the indoor nets of the County Ground in Bristol on Sunday, when the rest of the team were resting after travelling from Cardiff in the afternoon.

Tamim, Bangladesh's highest ODI run-scorer, has not had a happy World Cup so far. In the three matches against South Africa, New Zealand and England the left-hander got out for scores of 16, 24 and 19 respectively.

It was raining in Bristol in the evening, but Tamim still went to work on his game and faced throwdowns in the indoor nets of the venue for Bangladesh's World Cup match against Sri Lanka on June 11. Tamim hit the last of his 11 ODI centuries on July 28 against West Indies in Basseterre last year, but he has not been in bad form since. He has hit four half-centuries in the 14 innings since that ton, including two in the tri-series in Ireland last month.

The manner of his dismissals have been a slight concern in this World Cup. While he got out to a good ball bowled by South Africa's Andile Phehlukwayo in the opener on June 2, he was dismissed trying to pull short deliveries while out of position in the games against New Zealand and South Africa. For a player whose role is to bat deep into the innings, that sort of dismissal, especially the one against New Zealand pacer Lockie Ferguson, hinted at an unsettled mindset. The dismissal against England, however, was brought about as much by scoreboard pressure as anything else, but there were perhaps better options than dancing down the track to one of the fastest bowlers in the world in Mark Wood.

Bangladesh have lost their last two games, which makes the next one against Sri Lanka, one of three teams in the World Cup ranked lower than Bangladesh, all the more crucial. The Tigers need to win at least five games to have a chance of making it through to the semifinals.