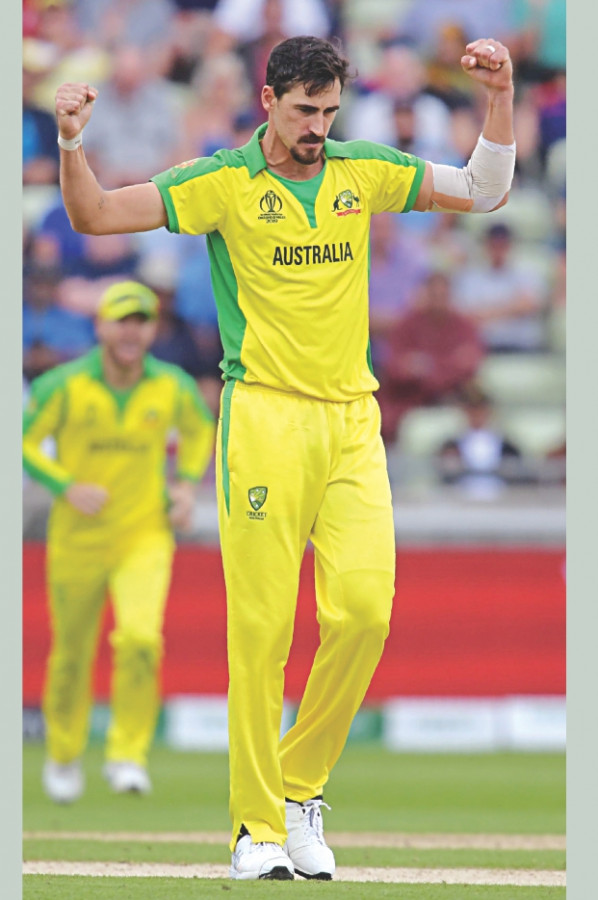 Australia pacer Mitchell Starc set a new record for most wickets at a single World Cup when he had England’s Jonny Bairstow lbw in the semifinals at Edgbaston yesterday.

That gave the left-arm quick his 27th wicket of the 2019 tournament, breaking the record of 26 for a single edition he had previously shared with retired Australia paceman Glenn McGrath.

But Starc’s strike ended up being just a footnote in the match as England cruised home with eight wickets and 107 balls to spare in chase of 224.

Starc had equalled McGrath’s tally of 26 wickets during Australia’s last league game against South Africa -- with the scalps of J.P. Duminy and Dwaine Pretorius.

He also boasts the impressive stat of having taken a wicket in each of his World Cup games across two editions.

Starc is no stranger to World Cup success. Not only has he won cricket’s greatest prize, but he was also the star of Australia’s triumphant 2015 World Cup campaign.

He had then scalped 22 wickets. The left-arm pacer was rewarded for his incredible effort, as he was awarded the Player of the Tournament award.

The 29-year-old will now be looking to break another of McGrath’s record -- the one for  most wickets in World Cup history.

Over the span of just two World Cups, Starc has scalped an incredible total of 49 wickets in just 18 matches.

That has taken him into the top five of all-time wicket takers in World Cups.

If Starc can maintain his fitness and his astounding prowess in the showpiece event, Starc could definitely top the list by 2023.