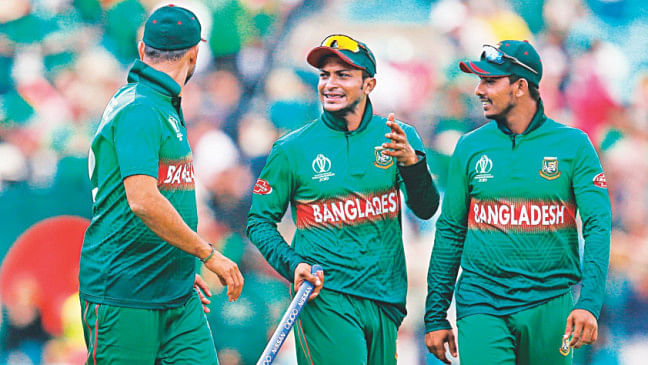 Bangladesh played three matches in this World Cup and won against South Africa in their opening before being defeated by New Zealand and England respectively. There were both ups and downs in all the matches with some players performing well while others have not clicked yet. Let us look at the best batsmen and the bowlers in the matches so far.

The ace all-rounder Shakib Al Hasan has been the best batsman for Bangladesh in this mega-event so far. He has struck at least a fifty in each innings -- 75, 64 and 121 against South Africa, New Zealand and England respectively -- to become the highest run getter not only for the Tigers but also the whole tournament.

Mushfiqur Rahim's bat has also produced runs in the tournament this far. He had a 142 run partnership with Shakib in the match against South Africa where he scored 78 runs.

With Mostafizur Rahman not performing up to the high standards he set for himself, new comer Mohammad Shaifuddin has been amongst the wickets. He is the go to bowler for the captain Mashrafe Mortaza every time Bangladesh needs a wicket.

Having taken 3 wickets in three matches, Shakib also makes the top five bowlers list. As a result of his all-round performance, he is also the highest point getter in the ICC Fantasy League.

Other than that, Mehdi Hasan Miraj performed really well as he kept the batsmen at bay giving away the least runs among the Bangladesh bowlers.