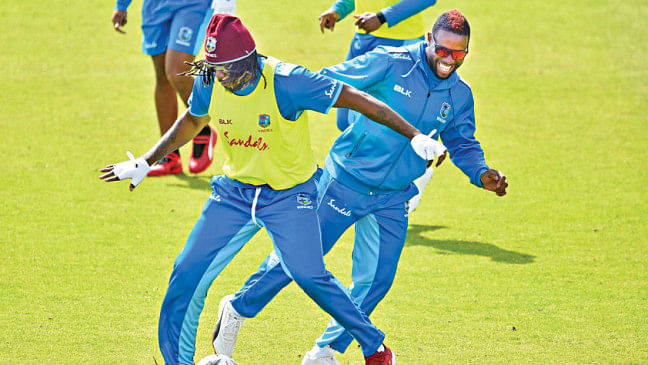 Chris Gayle has fired for the West Indies with a half-century in the World Cup already, but the hard-hitting firebrand may be getting ready to erupt against a despondent South Africa side in their clash today. If the Proteas are to fight back, they will need Kagiso Rabada (bellow) to be at his best. PHOTO: AFP
Agencies, Southampton Agencies, Southampton

We have to deal with what we have. There is no point complaining. We’ve had quite a few problems in this tournament with injuries and we’ve had to work around it. We just need a few things to click... We’re looking to turn it around tomorrow.

The Proteas lost their opening match to hosts England by 104 runs on May 30, before going down to Bangladesh by 21 runs.

Next, Virat Kohli-led India handed them a six-wicket loss, meaning the elbow room for Du Plessis’ team is increasingly getting narrow.

West Indies, on the other hand, have had a mixed run so far. They were outstanding against Pakistan in their opening fixture, where they blew them away with their scary pace. Next, they lost to Australia by 15 runs, but it was a match they should have won.

On current form, the Caribbeans start favourites, even though it is a bit too early to write off South Africa, or any team for that matter.

Meanwhile, South Africa coach Ottis Gibson admitted on Saturday he was frustrated to have to deal with the row over AB de Villiers’ controversial late offer to play in the World Cup.

It has emerged that De Villiers contacted Gibson and South Africa captain Faf du Plessis to tell them he was willing to come out of retirement.

But it was agreed that De Villiers, who retired from international cricket last year, had left it too late to be called up because it would not have been fair to other players who had featured against Pakistan and Sri Lanka ahead of the World Cup.

De Villiers’ offer had remained under wraps until after South Africa’s World Cup campaign plunged into crisis with a third successive defeat against India on Wednesday.

The West Indies were in high spirits ahead of their game against South Africa, with captain Jason Holder (L) and Fabian Allen seen joking during a training session at the Rose Bowl in Southampton yesterday. PHOTO: AFP

Having lost all three matches, Gibson’s side head into Monday’s clash likely needing to win their remaining six games to have a chance of making the semifinals.

Asked how the situation with De Villiers developed at his pre-match press conference in Southampton on Saturday, Gibson revealed he had spoken to the 35-year-old and told him he should have made it clear he was available earlier in the year.

“AB called me. I think it was the morning that the squad was going to be announced. A lot of other things had gone on before that, of course,” he said.

“We had decided already that he left it too late because the door was left open up until December, and then after that to come this late in the day,” he added.

Considering the six matches the two teams have played against each other in the World Cup so far, South Africa are ahead with four wins while West Indies have won two games.

South Africa leg spinner Imran Tahir is the leading wicket taker among the current players on both sides, claiming 26 wickets from the eight matches played against West Indies.

South Africa batsman Hashim Amla, with 1063 runs from 15 matches between the sides, is the leading-run getter among players on both teams.