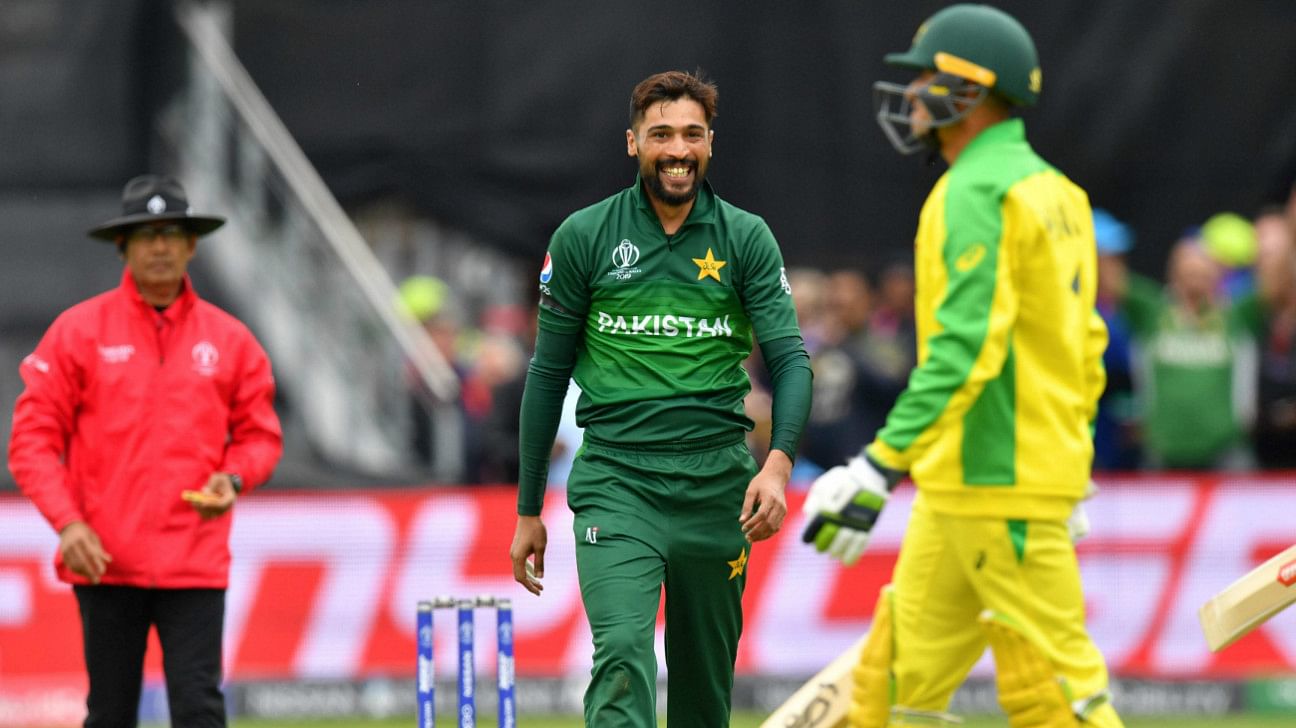 After Australia had Pakistan reeling on six for 160 in 30 overs, it seemed like a win for the Aussies was just a matter of time. However, Hassan Ali's 15-ball 32-run cameo which was followed by Wahab Riaz's 45 off 39 balls that was laced with two fours and three maximums gave a little hope to Sarfaraz Ahmed and his troops. But despite Wahab's late surge, Pakistan fell short on the day as they could only manage 266 in 45.4 overs.

Mohammad Amir took a one-day international best five for 30 as Pakistan bowled Australia out for 307 in a World Cup match in Taunton on Wednesday.

David Warner made 107 -- his first international century since he completed a year-long ban for ball-tampering.

Australia were set for a huge total while Warner and captain Aaron Finch (82) were sharing a first-wicket stand of 146 -- the highest partnership for any wicket at this World Cup to date.

But left-arm quick Amir, on the ground where he returned to first-class cricket in England in 2016 after completing a spot-fixing ban, dragged Pakistan into the game.

His figures surpassed his previous best of 4-28 against Sri Lanka in Colombo in 2009 and are the best in the tournament so far.

Amir ended the innings with an over to spare when tailender Mitchell Starc holed out.

Both Warner and Steve Smith, also returning from a year-long ban for ball-tampering, had been jeered by fans in previous group matches.

Pakistan fans largely heeded a pre-match appeal from captain Sarfaraz Ahmed not to boo the pair, preferring to roar chants of "Amir! Amir!" as he ran in.

Amir was on target right from the start after Sarfaraz won the toss on an overcast morning at southwest county Somerset's headquarters.

He started with a probing maiden -- one of two in an initial four-over spell that cost a mere 11 runs.

He was dropped again on 44 when wicket-keeper Sarfaraz could not hold a tough chance following an edged cut off Mohammad Hafeez's second ball.

Finch cashed in, hitting off-spinner Hafeez for two successive fours as he completed a 63-ball fifty.

The skipper then hoisted Hafeez for two legside sixes in as many balls.

But Finch gave his wicket away when he miscued a big shot immediately upon Amir's return only to miscue, with Hafeez taking a fine catch running back from cover.

Warner completed his 15th one-day international hundred when an outside edge off Shaheen Shah Afridi flew past slip Asif for his 11th four.

He reached his hundred off 102 balls, including one six.

A joyful Warner leapt in the air in celebration.

But he was out soon afterwards, caught at deep point by Imam-ul-Haq off Shaheen, having gone past fifty for the third time in four innings this World Cup.

Australia opener David Warner reaches the three-figure mark against Pakistan at The Cooper Associates County Ground in Taunton today. The left-hander is currently batting on 101 off 102 balls.

Although Warner looked a bit shaky at the start of the innings and especially struggled early against Pakistan's ace pacer Mohammad Amir, the 32-year old managed to survive. Warner has smashed 10 boundaries and a maximum while on his way to the ton.

Australia survived a probing opening spell by Mohammad Amir to reach 76 without loss off 13 overs after being sent in to bat by Pakistan in a World Cup match at Taunton on Wednesday.

Roared in by chants of "Amir, Amir" from the Pakistan fans in the crowd, the left-arm quick was on target right from the first ball of the match, beating Australia captain Aaron Finch's outside edge.

That first over was a maiden and Amir bowled two in a four-over spell in which he conceded a mere 11 runs.

Finch should have been out for 26 in the 13th over when he edged Wahab Riaz, one of three left-arm quicks in the Pakistan side, only for first slip Asif Ali to drop a head-high chance that burst through his hands before going for four.

At the end of the over, Finch was 35 not out and left-hander David Warner 33 not out.

Pakistan captain Sarfaraz Ahmed decided to give his bowlers first use of a green-tinged pitch under overcast skies.

But Shaheen Shah Afridi, drafted in as an extra seamer after Pakistan dropped leg-spinner Shadab Khan, was not as accurate as fellow left-arm quick Amir.

His first two overs cost 24 runs, with Finch pulling a short ball for six and Warner also cashing in with a pulled four when Afridi failed to pitch up.

Reigning champions Australia are looking to bounce back from a 36-run loss to India -- their first defeat of this World Cup -- with Pakistan keen to build on a win over England after their last group match, against Sri Lanka, was washed out. (AFP, Taunton)

Pakistan captain Sarfaraz Ahmed decided to give his bowlers first use of a green-tinged pitch on an overcast morning after winning the toss in their World Cup match against Australia at Taunton on Wednesday.

Pakistan brought in an extra paceman in Shaheen Shah Afridi and dropped leg-spinner Shadeeb Khan in the only change to the side that bounced back to beat England by 14 runs after they started the tournament with a seven-wicket defeat by the West Indies.

Pakistan's last group match, against Sri Lanka, was washed out without a ball bowled.

Australia made two changes from the side that lost to India by 36 runs at the Oval on Sunday -- the reigning champions' first defeat of this tournament.

Top-order batsman Shaun Marsh replaced injured all-rounder Marcus Stoinis, out with a side strain, and Australia opted to play an extra seamer in Kane Richardson, with leg-spinner Adam Zampa dropped.

"It's a fresh pitch, with grass on it and there is a little bit of moisture around," said Sarfaraz. "Unfortunately we didn't play in the last game but we've had three days of hard practice."

Australia captain Aaron Finch said he would also have chosen to bowl had he won the toss.

"In one-off games against teams like this, you have to expect the best of the opposition," he said. "I think there'll be swing in the air and a little bit of seam today."

Pakistan were set to wear black armbands as a mark of respect for former international Akhtar Sarfaraz and umpire Riaz Uddin, both of whom died recently. (AFP, Taunton)