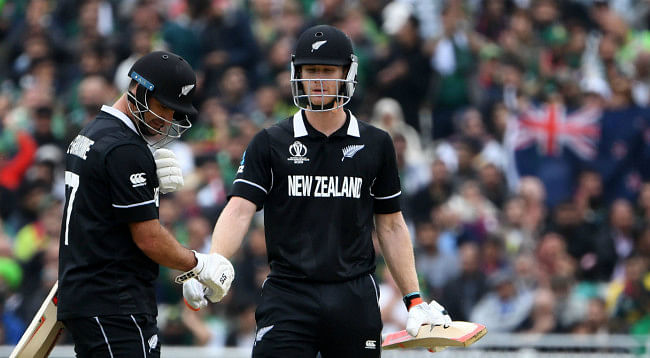 Babar Azam made an unbeaten century as Pakistan beat New Zealand by six wickets on Wednesday to move a point behind hosts England in the Cricket World Cup standings and boost their chances of reaching the semi-finals.

New Zealand, unbeaten in their first six games of the tournament, lost four early wickets before Jimmy Neesham's 97 not out lifted them to a respectable total of 237 for six at Edgbaston.

Azam scored 101 not out and Haris Sohail 68 to guide Pakistan to their target with five balls to spare and, with their remaining games against Afghanistan and Bangladesh, the 1992 world champions will be confident of reaching the last four.

New Zealand remained second in the standings, a point behind leaders Australia, and should still comfortably make the semi-finals. (Reuters, Birmingham)

Kiwis picked up early wickets after posting 237 against Pakistan.

Trent Boult removed opener Fakhar Zaman early before Lockie Ferguson's fantastic short ball gained up on Imam-ul-Haq and the left-hander failed to keep it down leading to Guptill diving forward to take the catch. Babar Azam and Mohammad Hafeez has since then stood guard for Pakistan as they reached 71 for 2 after 16 overs.

James Neesham hit a fantastic unbeaten 97 as New Zealand posted a challenging 237 for six on the board after Pakistan bowlers had run riot early on at Birmingham.

The Pakistan opening bowlers asserted their dominance with some fine seam bowling early on. The Kiwis lost four wickets inside 13 overs before captain Kane Williamson stood guard. Williamson hit 41 before he fell to Shadab Khan with the score on 83 for 5. From that point onwards, it was Neesham's day. He put together a 132-run partnership with Colin Grandhomme for the sixth wicket. Grandhomme fell after scoring 64 at the death end of the innings following a run out. Some big hits from Neesham, with the last ball also going for six off Wahab Riaz saw New Zealand reach 237. Earlier Shaheen Shah bagged three wickets for Pakistan.

Pakistan new ball bowlers have run riot against New Zealand in the World Cup game at Birmingham as Kiwis have slumped to four down inside 15 overs at a pitch providing some seam movement.

Mohammad Hafeez opened the bowling from one end with Mohammad Amir bowling the second over. Amir bagged Martin Guptill in the first ball of his first over as the batsman dragged one back on to his stumps. It was the Shaheen Shah Afridi show after that as he removed Colin Munro, Ross Taylor and Tom Latham in a fiery spell of pace bowling. Kiwi captain Kane Williamson is still battling it out patiently with James Neesham at the other end. Shaheen has eye-catching figures of three wickets for nine runs in six overs.

A view of Pakistan fans during a rain delay to the start of the match against New Zealand in Birmingham on June 26. Photo: Reuters

New Zealand opt to bat against Pakistan after brief delay

New Zealand have won the toss and opted to bat first against Pakistan at Edgbaston in Birmingham today.

The toss of the game was delayed due to wet outfield owing to morning drizzles in Birmingham.

Both Pakistan and New Zealand take the field today with unchanged sides from their respective previous games in the World Cup.

Pakistan skipper Sarfaraz Ahmed hoped to improve one aspect of their game today.

"The fielding is a concern but we're working hard and hopefully we'll do well as a fielding unit today." said Sarfaraz at the toss.

New Zealand remain unchanged for the fifth game in a row. Kiwi skipper Kane Williamson said that they will be guarded against a 'very tough' Pakistan side today.

"You turn up and know you'll have a tough game, as Pakistan are a very tough side. For us, it's trying to build on those performances and keep improving," Williamson said.

The start of the crucial game between Pakistan and New Zealand is delayed due to wet outfield owing to drizzles in the morning at Edgbaston in Birmingham today.

There will be an inspection at 10.30 am local time (3:30 pm Bangladesh time) .Although the good news is that the covers are coming off.

Pakistan must need to win this game inorder to keep their semifinal hopes alive. Meanwhile, New Zealand could be the second team after Australia to qualify for semifinal if the Kiwis manage to win the game today.