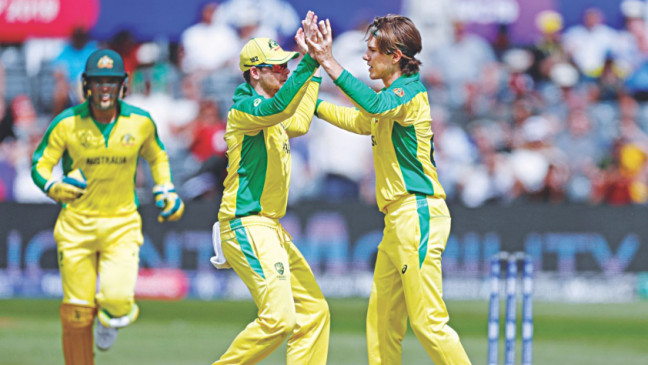 But as far as the three games so far that took place at different venues in the United Kingdom go, it failed to live up to that lofty promise. Not only that, a single batsman was yet to hit the magical three-figure mark.

Interestingly, it was only the fourth of the 12 World Cups in which a century had not been scored in the opening game.

Hosts England scored four half-centuries in the tournament opener against South Africa at The Oval on Thursday, but their total of 311 was well below the standard they set coming into the flagship event. South Africa’s response was disappointing. They were bundled out for 207.

The second World Cup fixture the next day involving Pakistan and West Indies was more disappointing as far as runfests were concerned. Sent in to bat, Pakistan were bundled out for 105, their second-lowest World Cup total. West Indies romped to a seven-wicket win thanks to a trademark Chris Gayle fifty.

Yesterday, Pakistan’s sub-continental rivals Sri Lanka did slightly better in their opening game against New Zealand. They were bowled out for 136.

The common trend has so far been the bowlers, the pacers to be precise, who are acting as bullies. They were coming in hard with a barrage of bouncers, bowling in good channels and reaping the rewards. The pre-tournament perception was that the pacers would be subjected to a lot of runs.

But surprisingly, they are acting as predators and accounted for a mind-boggling 35 out of the 41 wickets that have fallen in the three games so far (New Zealand innings not included); that too after a spinner took the first wicket of this World Cup.

West Indies’ pacers took all ten Pakistan wickets in a game where Pakistan pacer Mohammed Amir claimed all three of the opposition wickets that had fallen.

Although it is only the early stage of a long tournament, the pacers stealing a march in what is widely acclaimed more as a batsman’s games is an interesting revelation.

It is not that wickets in England have suddenly become unplayable for batsman. The early movement and bounce have always been there, which is quite natural in English conditions. It was the quality of batting or the approach towards it that has disappointed fans most.

Before the start of the World Cup, there was a lot of talk that a score of 300 would not be a safe total to defend. But the early indication is that it will be a good total to defend if you have solid pace attack backed by quality spinners.

Bangladesh will launch their World Cup campaign against a wounded South Africa today. And the evidence of the first few games will be quite handy for them in preparing a game plan. This Bangladesh batting unit has the ability to hit the 300-run mark without taking any unnecessary risks. Their fans would love for them to stick to basics and not be intimidated by the barrage of short-pitched stuff from the likes of Kagiso Rabada and Lungi Ngidi. It will be important for them to avoid early damage but at the same time a couple of free-flowing batsmen, including Soumya Sarkar, should also be allowed to express their attacking instincts.

The biggest lesson the Tigers should take going into their opening game is from the last practice game against India. It was a game where they allowed India enough breathing space to turn the tables despite reducing them to 102 for four at one stage. They can ill-afford to repeat it against a team prone to faltering under pressure.