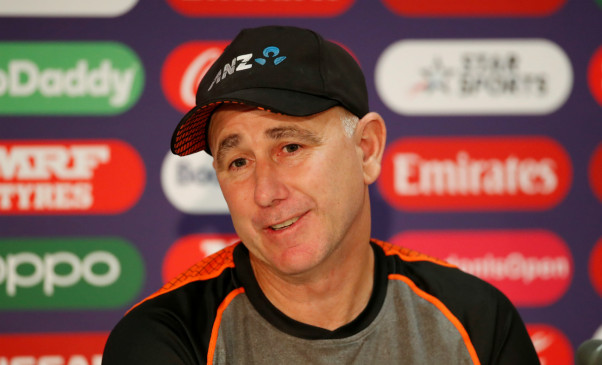 New Zealand coach Gary Stead has shrugged off the debate as to whether an umpiring error cost the Black Caps dearly in the World Cup final against England, saying umpires are "human" and the result could not be changed anyway.

England beat New Zealand on boundaries after a tied Super Over, but former Australian umpire Simon Taufel suggested that the umpires had incorrectly awarded an extra over-throw run to Ben Stokes in the 50th over when the ball deflected off his bat on the way to the boundary.

While Taufel said it was an "error of judgment" by the umpires, he added that it was "unfair" to say the extra run had decided the outcome.

Stead was also sympathetic with the umpires and said he had accepted his team's heart-breaking defeat at Lord's.

"At the end of the day the umpires are there to rule and they're human as well and like players sometimes errors are made," he told New Zealand media.

"That's just the human aspect of sport and probably why we care so much as well."

The manner of England's win has sparked fierce debate around the world and some level of angst in New Zealand, where disappointed fans vented their fury on social media.

The extra run aside, former New Zealand coach Mike Hesson was unhappy that the Super Over was used as a tiebreaker, followed by total boundaries scored.

"Using a Super Over to decide it was farcical and the International Cricket Council needs to give itself an uppercut for even entertaining it as a tiebreaker," he wrote in a column for Fairfax media.

Stead said he expected the ICC to review the way future finals were decided but added there was nothing New Zealand could do now.

"I'm sure there's going to be many things they will look at over the whole tournament," he said.

"I'm sure when they're writing the rules they never expect the world cup final to happen like that so I'm sure it'll be reviewed, absolutely.

"It's a very, very hollow feeling that you can play 100 overs and score the same amount of runs and still lose the game. But that's the technicalities of sport sometimes."