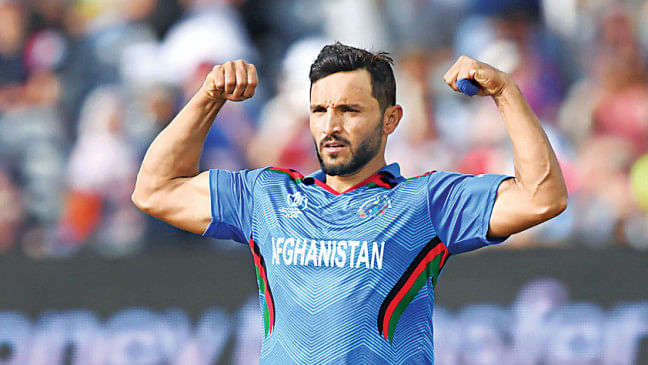 Afghanistan captain Gulbadin Naib said he was disappointed but not too downhearted after his team, the minnows of the World Cup, lost narrowly to cricket giants India in the final over of their group stage match on Saturday.

"We are sad because we have a chance to beat this kind of team. In the World Cup, it's a big achievement for any team. But the big teams, they don't give you a single chance. Today we missed an opportunity to win, to beat India, one of the best sides," Naib told reporters.

Despite having now recorded six straight losses and sitting bottom of the table, the tournament's rank outsiders have been growing in confidence and holding their own, particularly with their batting.

One key player on Saturday was all-rounder Mohammad Nabi, who took two wickets and was his side's highest scorer with 52 runs before falling in the last over of the day as India's Mohammed Shami claimed a hat-trick to win the match.

"Today Nabi showed the skills, how he's one of the best players of Afghanistan and also in the world," Naib said.

"Actually, we planned that we're going to take the match at the end to the (last) five overs. So Nabi played really well according to the plan," he said.

"When we played (our) first four games, we lost really badly, and then we played against England and now India - strong sides and also they are the favourites of the tournament. So I think we're now getting better and better day by day," Naib said.

Naib said his only regret was that despite restricting India to a low total, his batsmen weren't able to rack up quite enough runs to claim what would have been the biggest upset of the tournament by far.

"The score is chaseable, but I think we didn't take our responsibilities, especially on the batting side."

Nevertheless, he said his team were learning a lot from taking on the best teams in the world.

"We're taking a lot of positives from here, so when you're playing this kind of team, you learn a lot of things. We learn it with our mistakes," he said.

He also admitted to being a little star-struck by the opposition.

"It's my favourite team, and I support India when I'm watching. My favourite is also (India's captain) Virat Kohli, and I played against him," he said, smiling.

After suffering a crushing eight-wicket defeat against Afghanistan in the opening match of the Asia Cup on Saturday, Sri Lanka's chances of making it through to the Super 4 stage is hanging by a thread. They have one game left, against Bangladesh on September 1. With a poor run rate after one match, Sri Lanka must hope they beat Bangladesh and beat them handsomely to stand a chance to progress.

The team's captain Dasun Shanaka seems to be thinking in that direction as he feels Bangladesh are a much easier opponent compared to Afghanistan.

Bangladesh and Sri Lanka met 12 times in the format, with the Lankans winning on eight occasions. Shanaka feels the big number of meetings between the teams make the opposition familiar and makes it easier to work out plans.

Bangladesh will face Afghanistan on August 30 at Sharjah before the clash against Sri Lanka two days later in Dubai.

The Asia Cup is set to begin on August 27 in the UAE.

Asia Cup returns to the T20 format this year and a total of six teams-- India, Pakistan, Sri Lanka, Bangladesh, Afghanistan and Hong Kong-- will feature in the 15th edition of the tournament.

It will be played in a double round-robin format followed by the final, which means that each team faces the remaining sides in their group once which makes for two matches per side. The top two teams from each group then progress to the Super Four stage, where all teams play each other once in a round-robin format.

The top two teams in the Super Four stage then face each other in the final to determine the winner of the tournament.

India will face arch-rivals Pakistan in their Asia Cup opener and the iconic rivalry could feature not once or twice, but potentially thrice.
The tournament can be dubbed as a dress rehearsal for Asia's top cricketing nations ahead of the T20 World Cup 2022 in Australia October-November.

GROUP B: Sri Lanka, Bangladesh and Afghanistan B.

***All timings are given in Bangladesh Standard Time (BST)

August 27: Sri Lanka vs Afghanistan (Group B) in Dubai, 8pm

August 30: Bangladesh vs Afghanistan (Group B) in Sharjah, 8pm

September 1: Sri Lanka vs Bangladesh (Group B) in Dubai, 8pm

September 2: Pakistan vs Hong Kong (Group A) in Sharjah, 8pm

India plans to slash the import duty on gold because higher taxes have made it more profitable for smugglers, who can offer hefty discounts and denting the market share of banks and refiners, government and industry officials told Reuters.

The duty cut by the world's second-biggest consumer could lift retail sales by making gold cheaper ahead of peak demand season and support global prices.

It could also revive operations of local gold refineries, which nearly suspended refining for the past two months as they could not compete with grey market operators.

"The government is considering bringing the effective gold rate to below 12 per cent. The proposal is being discussed. We will take a final call soon," a government official, who did not wish to be identified, said.

The effective duty on gold is currently 18.45 per cent, which includes 12.5 per cent import duty, 2.5 per cent agriculture infrastructure development cess and other taxes.

Dhananjaya de Silva scored an unbeaten 66 as Sri Lanka kept their slim Twenty20 World Cup hopes alive with a six-wicket win over Afghanistan at the Gabba in Brisbane on Tuesday.

The Asia Cup champions moved to four points in Group 1 and can still make the semi-finals, but they need other results to go their way.

Group 1 leaders New Zealand were playing England, who have three points, in a later game at the Gabba Tuesday after Australia beat Ireland on Monday to move level on five points at the top but behind the Black Caps on net run rate.

The loss means Afghanistan are eliminated as they cannot make the semi-finals with one group match against Australia remaining after having two washouts and a opening defeat to England.

Afghanistan captain Mohammad Nabi won the toss and chose to bat but Sri Lanka restricted them to 144-8, thanks largely to a fine spell from leg-spinner and player of the match Wanindu Hasaranga.

The Sri Lankan run chase got off to a poor start when Mujeeb Ur Rahman spun one back to bowl Pathum Nissanka for 10.

Khan took the next wicket when Charith Asalanka was caught by Azmat Omarzai on the boundary for 19 but by then Sri Lanka had reached 100 and had taken control of the run chase.

Sri Lanka captain Dasun Shanaka was pleased with his side's efforts with both bat and ball.

"I think we found some consistency today and it is important to continue it in the next game," Shanaka said.

"The other games are beyond our control, but the aim is to win the next game with a healthy run rate."

Hasaranga took 3-13 during Afghanistan's innings, not conceding a boundary in his four-over spell.

Afghanistan batted well in patches and looked on course for a big score, but every time they began to open up, Sri Lanka's bowlers were able to take key wickers to keep them in check.

Despite six of Afghanistan's batsmen getting a good start to their innings, none was able to convert to a big score with Usman Ghani's 27 being the best.

The target of 145 was at least 20 runs short of a competitive total and Sri Lanka cruised home with nine balls to spare when De Silva hit he winning four to take them to 148-4.

"We had a good start in the powerplay but did not keep the momentum till the end," Nabi said of the Afghanistan effort in the field.

"We tried to put up a good score but the pitch was too slow and we fell short.

"We did not bowl the right lines and lengths."

Opener Ibrahim Zadran smashed 106 to set up an emphatic 60-run victory for Afghanistan in the opening one-day international against Sri Lanka on Friday.

Afghanistan posted 294-8 after electing to bat as Ibrahim put on key partnerships including a 118-run second-wicket stand with Rahmat Shah, who made 52, in Pallekele.

Afghanistan fast bowlers Fazalhaq Farooqi and Gulbadin Naib shared seven wickets between them as the tourists bowled out Sri Lanka for 234.

Pathum Nissanka's 85 and a threatening 66 by Wanindu Hasaranga went in vain as Afghanistan ended the Sri Lankan innings in 38 overs.

But it was the batting that set the tone for Afghanistan's domination in the first ever bilateral ODI series between the two teams.

Ibrahim led the charge with his second ODI century and Najibullah Zadran's 25-ball 42 boosted the total but some disciplined bowling in the end checked Afghanistan, who looked like getting over 300.

Hasaranga returned impressive figures of 2-42 in his 10 overs.

Rahmanullah Gurbaz justified the captain Hashmatullah Shahidi's decision to bat first as he hit a flurry of boundaries in his 53.

Ibrahim joined the attack as the two put on 84 runs to set the tone for the batting charge.

Cameos from Najibullah and Naib, who made 22 off 24 balls, took on the bowlers in the end but Sri Lanka gave away just 31 runs in the final five overs and took five wickets.

The hosts started briskly but regular wickets hurt their progress with Naib picking two to rattle the top-order.

Nissanka reached his fifty in 42 balls and put on 47 runs with skipper Dasun Shanaka, who fell to Naib.

Farooqi denied Nissanka his ton but Hasaranga soon hit back to raise hopes of a turnaround.

He smashed Mohammad Nabi for a six and four fours in a 22-run 31st over and raised his fifty in 31 balls.

Wickets kept falling and Hasaranga was the last man out to Farooqi, who finished with figures of 4-49.

The loss dented Sri Lanka's chances of a direct qualification to the 50-over World Cup in India next year with crucial Super League points up for grabs in the series.

The second match is on Sunday at the same venue.