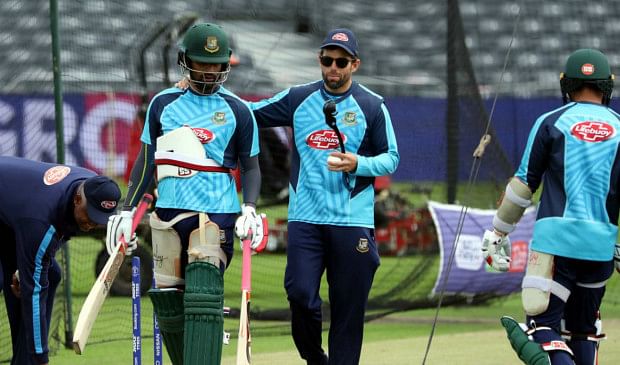 The Bangladesh batsmen scored a mammoth total of 330 against the South Africans in their first match of the World Cup 2019 – highest ever by Bangladesh in any ODIs. This goes to show that the Tigers are capable to score big runs. The players have made contribution to the score consistently over the year and are gradually seeping through the ranks.

"They have made good contributions in the last seven-eight months. [Mohammad] Mithun had two fifties in really trying conditions in New Zealand. We know what Soumya [Sarkar] can do. Mushfiqur [Rahim] and Shakib [Al Hasan] played really well. I think the guys can judge themselves on game plan. Committing to how they are going to play." said the coach.

"The trust is there," McKenzie told ahead of the England game, where they responded with 280 to fall short by 106 runs. "I think it is for them to trust themselves and the game plans. From the batting side of things, it is about trusting the person who is doing the job. I think with trust, you can let them play their game. I like to see it with the lesser-experienced players who have all been proper match winners."

"They need to have a backup plan, if plan A doesn't work, then they need proper thinking. Bangladeshi batsmen have some great hand-speed. They hit the ball consistently well in skilled areas. We just have to trust their process." added the 43-year-old South African.

"I think selection has been a lot more consistent," he said. "We have to nurture our young players, and when they get the chance, they know they will get a proper run. It is not just one game in, one game out. I think it is through the whole system has been really good. Liton was in and out, up and down in the Asia Cup. We backed him. He got a good forty. He failed again and then he got an unbelievable hundred in the final.

"The selectors are showing the guys that we back them. We trust and believe them. We are not giving them a chance because the journalists are saying that's the guy who should be making it. The coaches and captain believe in these guys. It is batting for your country as a young player is really hard so you definitely need the backing from everybody." added McKenzie.

"Saikat has fantastic hands through the ball, he said of Mosaddek. "It is just about getting that consistency, wanting to be there when the pressure is on, and wanting to be there for Bangladesh when its needed. I am very pleased with him, I think he has worked really hard. I think his game plans are a little bit sound, and he comes with a bit of maturity and chance." said the batting coach.

McKenzie also said he doesn't mind batsmen getting out, if they are out to shots that was part of the strategy at a given time. He felt backing them in such situations was the best way to induce self-belief.

"The guys are getting closer to knowing their games, which is really good for Bangladesh cricket," he said. We will hopefully pose a few more 300s, when the wicket demands it. We have some proper players who are missing out in the squad and at home. It says that the batsmen you have on tour are world-class."