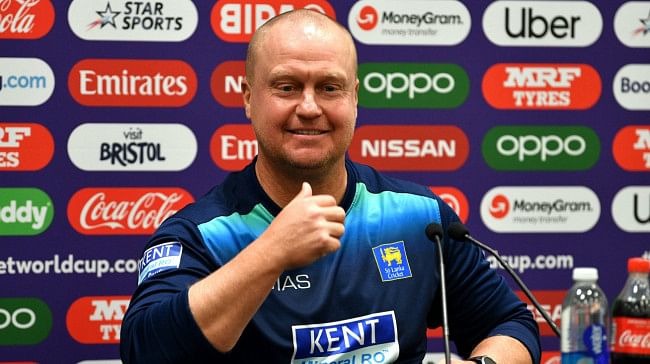 Sri Lanka's batting coach Jon Lewis earmarked Bangladesh as a tough opposition against any team but still backed his players ahead of the two sides' encounter in Bristol tomorrow.

Bangladesh have had a couple of good results against the Islanders in recent times. The Tigers had registered a 163-run victory -- their biggest margin victory in ODIs -- when they met during a tri-nation series in Mirpur in January 2018. Even the last time when the two sides had met, in the Asia Cup in September of the same year, Bangladesh won by a whopping 137 runs.

"It will be tough and as you say Bangladesh have had a couple of decent results against Sri Lanka, but you know, this is a World Cup. The situation is very different. I think already, you've seen that maybe World Cup cricket isn't the same as bilateral one-day tournaments. Yeah, no doubt at all that there's a hell of a challenge ahead of us, but we also do have a lot of confidence in the players that we have in our dressing room and a lot of faith in them. So we are still confident," Lewis said during a press conference in Bristol today.

Although Lewis acknowledged Bangladesh to be a tough opposition, the 49-year old was optimistic regarding the positive attitude of Sri Lanka players on the day.

"They are a very good side, there's no doubt about it. They have had a tough start to the World Cup in terms of the fixtures, some difficult ones, but they have obviously put in some good performances. Even in games they haven't won, they have put in good performances which have suggested they are going to be a tough opposition for everybody, so we know that. But our focus will be on us and us being positive on ourselves, and we'll believe even though we know it is a strong opposition, and an opposition that probably has the right to be confident because of the way they have played so far, we'll still be backing ourselves very strongly," Lewis said.