‘It would be foolish to write off this Pakistan side’ 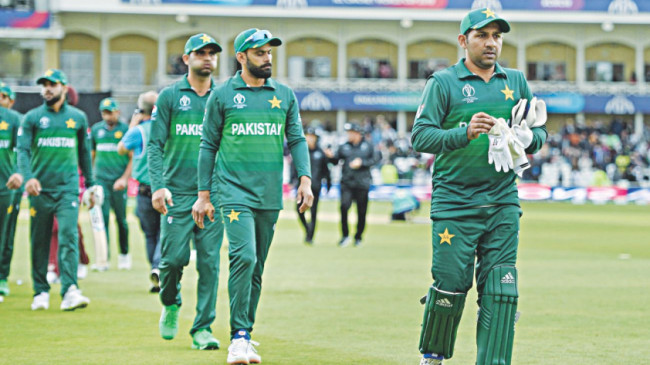 After Pakistan folded for a paltry 105 in a seven-wicket loss to the West Indies in their World Cup opener on Friday, skipper Sarfaraz Ahmed (R) was subject to a lot of scrutiny. Photo: AFP
Agencies, London Agencies, London

Former Pakistan speedster Shoaib Akhtar lashed out at Pakistan captain Sarfraz Ahmed after their humiliating defeat to West Indies in their ICC World Cup 2019 opener against West Indies on Friday.

According to a senior Pakistani journalist Saj Sadiq, Shoaib singled out captain Sarfaraz Ahmed for criticism.

“When Sarfaraz Ahmed came for the toss, his stomach was sticking out and his face was so fat. He’s the first captain I’ve seen who is so unfit. He’s not able to move across and he’s struggling with wicket-keeping,” tweeted Sadiq.

‘Speechless’ was Shoaib’s first reaction to Pakistan batsmen’s meek surrender in front of the West Indies fast bowlers, who dished out a heavy doze of short balls.

Shoaib, however, recollected his thoughts and later on went on to say that it’s early days and everyone needs to back the Pakistan team.

“Ok the match is over. Recollecting my thoughts and emotions. We have to back these boys, they are representing our nation. They need our support throughout the World Cup,” he said in the second tweet.

“It’s a disappointing performance of Team Pakistan, let’s not disheart them more and back them up,” Akhtar wrote in the third and final tweet while also sharing a video expressing his opinion.

Meanwhile, fast bowling great Waqar Younis feels that it would be foolish to write off Pakistan after a crushing defeat, but also feels that it does not mean that Pakistan’s poor start to the tournament can be justified by comparing it with their run in 1992 when they scripted a sensational turnaround to win their maiden World Cup till date.

“You have to remember that this World Cup is a very long tournament. There is a lot of cricket still to be played and it would be foolish to write off this Pakistan side after their defeat to the West Indies,” Waqar wrote in a column for the ICC.

“You have to give credit to the West Indies for the way they used the short ball to pepper the Pakistani batsmen,” he said referring to Pakistan’s 105 all out after they were asked to bat first.

“Andre Russell in particular was outstanding with those first three overs that he bowled at the top of the order. He may have only taken a couple of wickets, but it was his short-pitched barrage that showed the way for the rest of their attack.” The 47-year-old reasoned why there is little point in harping over the unpredictability of the Pakistan team. “A lot has been said before about Pakistan’s record in the past, the unpredictable nature of this side.

“They lost heavily in their first game in 1992 and bounced back to win that tournament after all. But we cannot really dwell on what happened 27 years ago. Winning the 2019 tournament is going to take some doing this time around.

“A defeat like that damages the confidence and we need to make sure that we take our time to try and bounce back, think positive and turn the ship around.”

Pakistan have a massive challenge in their next game as they take on hosts and tournament favourites England at Trent Bridge on Monday. England had blanked Pakistan 4-0 in an ODI series ahead of the World Cup.