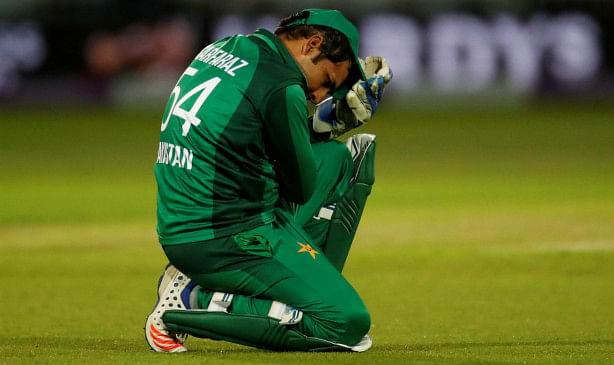 Pakistan must improve their fielding if they are to beat India in their crunch World Cup match on Sunday, captain Sarfaraz Khan said after the team's 41-run loss to Australia in Taunton.

Pakistan conceded overthrows against Australia and were punished by Aaron Finch, who was dropped by Asif Ali at slip when he was on 33.

The Australian skipper went on to score 82 and built a 146-run opening stand with centurion David Warner to allow the champions to post a competitive total of 307.

"When two good teams play each other, the fielding can make a difference and we conceded runs due to lapses in fielding," Sarfaraz told reporters. "If you want to beat the big teams we can't make such mistakes.

"Our fielding is not up to the mark and we will work hard on that before the India match. India are a strong team and if you continue to make the same mistakes then you won't get an opportunity to win the match."

At 136-2, Pakistan appeared well set to chase down their target midway through their innings but soon lost Imam-ul-Haq, Mohammad Hafeez and Shoaib Malik in the span of three overs to be reduced to 147-5.

"We made good starts but didn't build partnerships," Sarfaraz added. "The first few wickets were soft dismissals after the batsmen got set... We lost three wickets in 15 balls and that was the turning point in the match."

Pakistan play arch-rivals India next at Old Trafford on Sunday in a fixture where tensions always run high.

Imam, who scored 53 against Australia, said he was looking forward to playing in front of what is expected to be a capacity crowd.

"Obviously to be part of that kind of game, it's great," Imam said. "It's in Manchester, lots of Pakistani fans there, so I'm really excited about it.

"It's a huge pressure game. Pakistan and India, there's a lot of mysteries behind that but we want to just focus on our cricket strengths and how we can get better."