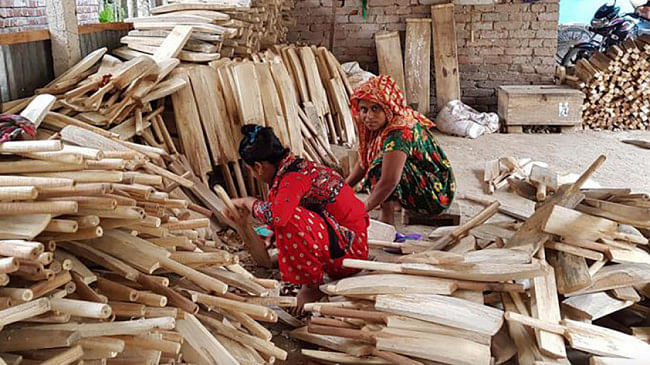 With Bangladesh participating in the ongoing World Cup at its birthplace in England, cricket fever has spread all over the country. However, a number of workers in a factory located in Mistiripara village of Narendrapur union in the Sadar upazila of Jashore district remain preoccupied with their endeavour to make one of the most crucial equipment required to play the beautiful game.

The Mistiripara region is now commonly known as 'cricket bat village' and just as the name suggests, cricket bats have been made in a local factory for a long time now.

Almost a staggering four lakh bats are made in Mistiripara and other nearby villages like Battala, Mahajerpara and Rupdiya of Narendrapur union. While these bats are sent to different parts of the country for retail, its biggest market remains the districts in North Bengal.

"We have been making and selling bats for almost five years. My factory makes seven to eight types of bats and everyday a minimum of 100 bats can be made here." said Gourango Majumdar, the owner of a local bat-manufacturing factory.

Gourango, whose economic condition has taken a turn for the better courtesy of his factory, said that they are held back due to the unavailability of a certain type of wood required to make international standard bats.

"If willow wood was available, then we could also make international standard bats like India and Pakistan." said the proud owner.

He also informed that he is not the only one who has expertise in making bats in the region.

"I am not alone in this region, almost everyone here knows how to make bats."