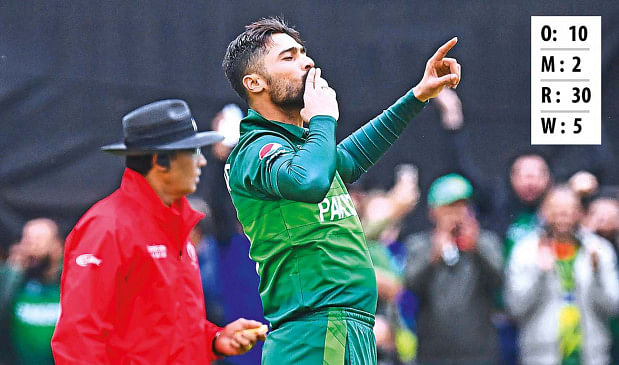 Pakistan ace left-arm pacer Mohammad Amir ran riot on the field, bagging a fifer to help his side restrict Australia to 307 in 49 overs after Aaron Finch’s side made a flying start in their World Cup encounter yesterday at The Cooper Associates County Ground in Taunton yesterday. Photo: AFP
AFP, Taunton AFP, Taunton

Pace spearhead Mohammad Amir soaked up the adulation from Pakistan fans as he roared to the top of the World Cup bowling charts with career-best figures against Australia on Wednesday.

Amir was back in Taunton where he made his return to first-class cricket three years ago following a ban for spot-fixing.

Now he is back with a bang, taking five for 30 in his 10 overs on Wednesday to improve on his previous best figures of 4-28 against Sri Lanka a decade ago.

With the crowd chanting “Amir, Amir, Shabash” (come on) from the stands in Taunton, he delivered two maiden overs in his first spell as Australia openers Aaron Finch and David Warner played and missed.

His efforts helped peg Australia back to 307 but that ultimately proved too much for Pakistan.

“It’s really amazing, I mean the crowd support,” Amir said. “We have so many Pakistani fans at all England grounds and when they shout my name it pumps me up.”