Amir aiming for another triumph at Taunton 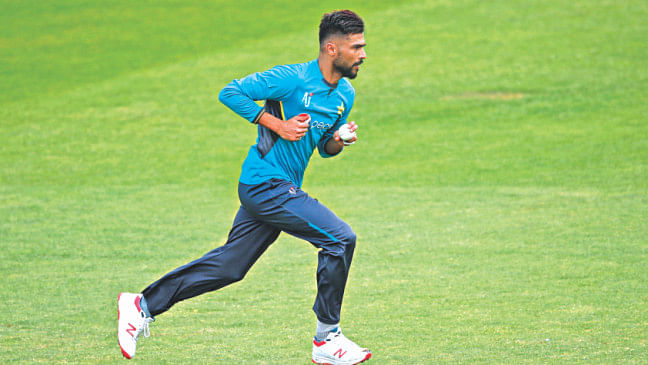 Mohammad Amir will be hoping to make a mark in Taunton -- the place where he came back to cricket three years ago following a ban due to spot-fixing. FILE PHOTO: AFP/REUTERS
Afp, Taunton Afp, Taunton

Mohammad Amir will hope to enjoy another landmark occasion at Taunton when Pakistan face Australia there in a World Cup match on Wednesday.

The group fixture at southwest county Somerset’s headquarters sees Amir back at the ground where he made his return to first-class cricket in England three years ago.

Amir was the rising star of world cricket when his career came to a stunning halt during a Lord’s Test in 2010 after both he and new-ball partner Mohamed Asif were caught bowling no-balls on the orders of then Pakistan captain Salman Butt as part of a newspaper sting operation.

The trio all received five-year bans from cricket and jail terms.

That same 2010 season had seen Amir produce a superb display of swing bowling in taking three for 20 as Pakistan dismissed Australia for just 88 on the first day of a ‘neutral’ Test at Headingley.

Those skills remained intact as Amir marked his 2016 return to the first-class game in England in 2016 with a haul of three for 36 against Somerset at Taunton.

All three wickets -- including that of former England opener Marcus Trescothick -- owed much to late swing.

The intervening years have not been easy for Amir, however, and he almost missed what is his first World Cup after taking just five wickets in 14 matches before a recent one-day international series in England.

Amir did not bowl in the washed-out first match against England and missed the last four games with chicken pox. England won the series 4-0.

But having been left out of Pakistan’s preliminary squad for the World Cup, the 27-year-old made it into the final 15.

His World Cup debut was a rare Pakistan highlight after they slumped to 105 all out against the West Indies, with Amir taking three for 26 in a seven-wicket loss at Trent Bridge.

He was in the wickets again at the Nottingham ground, but this time in a winning cause, with two for 67 as Pakistan surprisingly beat tournament favourites England by 14 runs last week.

But Pakistan’s progress was checked by a total washout against Sri Lanka at Bristol.

Pakistan have won just one of their last 14 matches against champions Australia, the five-times World Cup winners.

That victory was inspired by Mohammad Hafeez’s 72 at Melbourne in January 2017.

And it was Hafeez’s 84 that laid the foundations for an impressive total of 348 for eight against England.

“We have not won many matches against Australia but we had not won too many against England either,” said Pakistan captain Sarfaraz Ahmed.

“But we have finally beaten England and that has given us a lot of positives.

“We will go with the aggressive approach we showed against England.”

The wicket-keeper expects to face an Australia side stung by a 36-run loss to India last weekend -- their first defeat of this World Cup following wins over Afghanistan and the West Indies.

“We know Australia will try to come back and with (Steve) Smith and (David) Warner back they are at their best again,” said Sarfaraz.

“We respect all our opponents and are ready for them.”

Australia will hope opener Warner, for all he has already scored two fifties this World Cup, is back to his destructive best at Taunton.

Warner’s 56 off 84 balls against India -- of which 48 were dots -- helped contribute to a slow run-rate that left Australia with too much to do at the end of their innings.

The left-hander was also involved in the run-out of Australia captain and opening partner Aaron Finch.

But Finch backed Warner, who along with Smith is playing in his first major tournament for Australia since serving a year-long ban for ball-tampering.

“They (India) bowled very well to Warner and he needs some more time. He’s a world-class player and will get us off to a flyer,” said Finch

However, there will another looking to make a mark today -- Australia’s David Warner, who himself has looked out of sorts since a return from a year-long ban. FILE PHOTO: AFP/REUTERS

Glenn Maxwell is the highest run-getter among the players of both Australia and Pakistan’s current World Cup squads. The Aussie right-hander had scored 715 runs in the 17 matches he featured in against Pakistan.

Australia opener David Warner registered his highest individual score in ODIs when the left-hander smashed a 128-ball 179 against Pakistan at the Adelaide Oval in January, 2017.

Babar Azam is the only batsman on the Pakistan team to have scored a hundred against Australia.

Among the players on the current Pakistan World Cup squad who have faced five-time World Champions Australia, Shoaib Malik is the highest scorer with 669 runs in 27 matches

Mitchell Starc scalped a total of 21 wickets in the nine matches he played against Pakistan. This is the highest number of wickets secured by any bowler in either teams’ current World Cup squad.

Hasan Ali’s five for 52 against Australia in January 2017 in Sydney remains the best bowling figures by any player in Pakistan’s current World Cup squad.