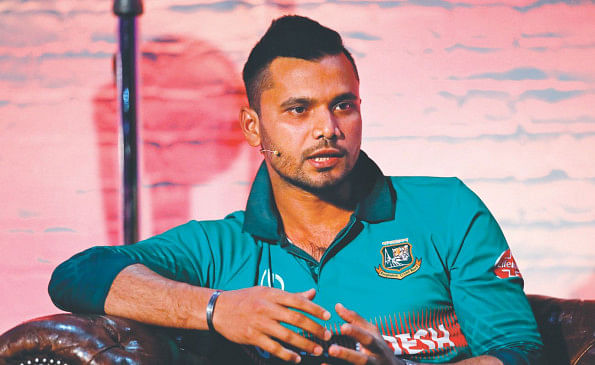 Bangladesh skipper Mashrafe Bin Mortaza and coach Steve Rhodes did not cut happy figures when they came out to perform the formalities after the World Cup game against Sri Lanka was abandoned without a ball bowled at the County Ground in Bristol yesterday.

Mashrafe spoke to Michael Atherton as part of the commitment to speak to television audiences after the match, but it seemed an empty gesture without there actually being no match to speak of.

“It is disappointing for any team to not be able to play a game after coming to the ground,” Mashrafe told Atherton.

Coach Steve Rhodes fronted up to the media and left no doubt about what the team expected from the match that was not to be.

“We really targeted this sort of game as two points, and I know that Sri Lanka would have fought very hard and no pushovers at all,” the Englishman said. “But we do see it as one point lost, and that’s disappointing.”

After points were shared because of the abandonment, Bangladesh have three points from four games, which means they have to win four of their five remaining matches against West Indies, Afghanistan, India, Australia and Pakistan to stand a chance of making the semifinals.

Mashrafe was asked about their next match against West Indies, and how the small ground at Taunton may play into the hands of their lower-ranked opponents.

The washout against Sri Lanka, a match the Tigers were desperate to play as it was one of just three against lower-ranked opposition, makes the equation difficult for Bangladesh but it also simplifies what their approach should be: in the captain’s words, there is no alternative to winning.

They were in a similar situation in the Asia Cup last September in the UAE, where they had to win each of their last two Super Four games against Afghanistan -- who had beaten them handily in the group stage -- and Pakistan to reach the final. It was then this singular focus on winning that carried them through and almost won them the final, which they lost against India in the last over.

“And now all we can do is win our games coming up,” Rhodes echoed the captain. “One at a time and just think of that, win the next game against West Indies and then win the next one after that. That’s all we can do.

“We’ve played against the West Indies bowlers, recently in Ireland,” said Rhodes when asked about West Indies’ possible bouncer ploy. “So we are well aware of what they have got and we know what’s coming and we’ve got some plans to try and deal with that.”