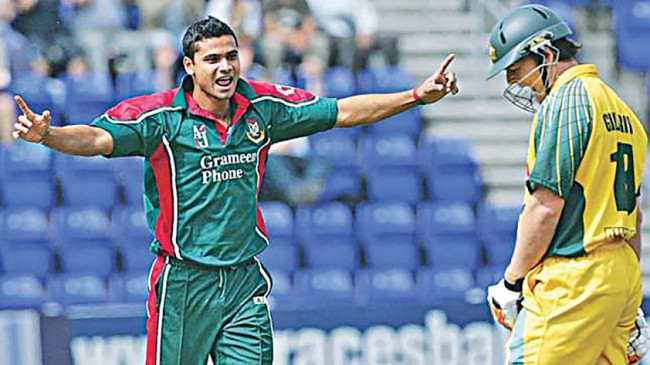 Mashrafe Bin Mortaza smiled widely when an Australian journalist asked him to talk about the match in Cardiff 14 years ago, when Bangladesh notched their only win over Australia.

The smile grew wider when his wicket of legendary Australian wicketkeeper-batsman Adam Gilchrist was mentioned. Although most remember Mohammad Ashraful's sublime century during that five-wicket win, Mashrafe's 10 overs for just 33 runs was also crucial as it kept the mighty Australians to a manageable total.

"I got his wicket, I guess -- Adam Gilchrist," said Mashrafe. "That night, suddenly, a limousine arrived in front of the hotel and everyone got inside."

Bangladesh will face Australia in a World Cup match today and despite the opposition being considerably weaker than the all-time great team that Bangladesh upset 14 summers ago, a much-improved Tigers will still go into the match as firm underdogs.

"And obviously that Australia was very strong," Mashrafe said about the team that included Gilchrist, Glenn McGrath, Ricky Ponting, Jason Gillespie, Damien Martyn and Michael Hussey.  "Australia are always a special team, especially in the World Cup. They always play at their best in the World Cup. It won't be easy.

"But it's been a nice memory. I can remember everything we did on that particular day and night. But I hope that the same day will come tomorrow, but for that we have to play hard and at our best."

A police chase stopped play at a Cardiff cricket match as officers pursued suspected car thieves through the grounds where the match was going on.

Radyr was playing Marylebone Cricket Club when officers ran across the pitch and into a neighbouring field, leaving players and spectators watching on.

It ended soon after when officers re-appeared with five arrested youths.

It is alleged a stolen BMW was involved in the incident and had earlier driven through nearby Hailey Park in Llandaff North.

Jo Morgan, the scorer at Radyr Cricket Club, said they had heard the helicopter for a while before they saw a police car heading towards the pitch.

"The police got out and ran across the field," she said.

"They went into the neighbouring fields and within 10 minutes they were all walking back through with five youths."

South Wales Police has been asked to comment on the incident.

Taskin started off with a few jokes before saying that the incident that took place was a mistake and that Subhasish would like to say something regarding the incident. The shy Subhasish however kept shaking his head and kept saying that he was not ready to speak.

Funnily enough, Subhasish then requested Mashrafe to speak on his behalf when he said: "Bhai please say something."

Mashrafe greeted everyone and said: "Me and Subhasish are fine. You guys should also be in peace."

Mashrafe also said that Subhasish is a promising cricketer and hoped that he will perform well for Bangladesh in the future. He then let the shy Subhasish speak.

The incident between Masgrafe and Subhasish got attention in social media, where expectedly Subhasish was vilified for the incident.

Earlier, Mashrafe tried to soothe the atmosphere during the press conference, and later in the night posted a Facebook video message urging and imploring fans not to vilify Subhasish, saying that he [Mashrafe] was the one who started it and that things should not be taken too far against a fellow Bangladesh cricketer whom he considered a 'younger brother'.

Bangladesh ODI captain Mashrafe Bin Mortaza has never been one to stand on ceremony. During the first drinks interval of yesterday's match between Sri Lanka and Zimbabwe, the 100th ODI at Bangladesh's 'home of cricket', it did not matter that the BCB did not invite the home team to its own party. Mashrafe went out to the boundary and took a selfie with Abdul Motin, Mirpur's oldest groundsman who was present during the first match in 2006, and posted it on his Facebook with the caption: "More than a Tamim, Shakib century, Motin bhai's century today is a joyful one. Congratulations, Motin bhai... we await 200 at the Sher-e-Bangla".

SLOW OUT OF THE HAND, SLOWER OFF THE BAT

Batsmen visiting Asela Gunaratne's ESPNCricinfo page before a match will be in for a rude -- albeit unthreatening -- shock if they placed much store on the categorisation of the Sri Lankan's bowling as medium-fast. His longish run-up adds to the deception. Against Zimbabwe yesterday, he prised out three wickets, and on each occasion the batsmen were flummoxed by how long the ball took to get to them. Hamilton Masakada was caught at mid-off when trying to hit him out of the ground. He was especially frustrating in the slog overs, with Malcolm Waller's eyes lighting up when he got a full toss from the medium-fast bowler and, even after waiting, seemed to hit it early straight down deep square leg's throat. Peter Moor, meanwhile, could not even get it past the infield as he holed out at cover.

Zimbabwe batsman Sikandar Raza was the lone man standing with a half-century in their dismal showing against Bangladesh in the tri-series opener on Monday, but yesterday he went one better. His unbeaten 81 made sure that Zimbabwe reached a match-winning total after Masakadza hit 73 at the top. As important, however, was Raza's contribution during Zimbabwe's defence of 290. Opener Kusal Perera and skipper Angelo Mathews were threatening to run away with the chase as their third-wicket partnership swelled to 85, but Raza had Perera caught off a sweep at short fine leg for 80. He then took a diving catch at short midwicket to send the captain packing. Later, when Thisara Perera was going great guns and on the cusp of pulling off a backs-to-the-wall victory, he top edged a Tendai Chatara full toss. Who settled under the catch? You guessed it.

ALMOST EAGLE-EYED, BUT NOT REALLY

Tailender Akila Dananjaya was holding firm as Thisara Perera destroyed the bowling, until the 45th over, when he holed out off Chatara. Perera however asked him to wait as the umpires checked the no-ball. Replays showed Perera watching the crease like a hawk at the non-striker's end as Chatara's front foot landed. It was close, but the heel landed millimetres behind the line. Perera was next out when he was caught off a full toss and for a while he lingered, hoping it was above the waist. He walked off eventually, his vision serving him well in that instance.

With there being much speculation surrounding Bangladesh skipper Mashrafe Bin Mortaza's future, there was some tension in his post-match press conference yesterday. He had already announced that this was to be his last World Cup, but there was an outside chance that the 35-year-old -- no stranger to impulsive decisions -- would make a surprise announcement in his last press appearance.

However, he doused all that with a straight-batted answer when asked what his future plans were after Bangladesh closed their World Cup campaign with a 94-run loss to Pakistan at Lord's yesterday.

"My future plan is obviously going home from here, and I will have a rethink," was the anticlimactic answer delivered with a straight face.

Bangladesh have a tour of Sri Lanka later this month, and much of the interest following the World Cup will be around whether Mashrafe is on the plane to Colombo.

Joe Root and Jos Buttler laid the platform for England's dominant 122-run win over Sri Lanka in the fifth and final one-day international in Cardiff on Saturday.

Root top-scored with 93 as England made 324 for seven.

Together with man-of-the-match Buttler, who made a typically rapid 70, he put on 109 for the fifth wicket.

Sri Lanka's chase never got going and they were bowled out for 202 with more than seven overs to spare.

That gave England a convincing 3-0 series win, with one tie and one no result.

It was further proof of the progress England ha made in ODI cricket since their humiliating first-round exit from last year's World Cup, which included a nine-wicket thrashing by Sri Lanka in Wellington.

In the mood for Samba!