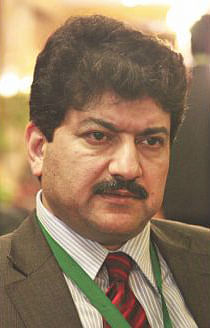 Pakistan must make an unconditional apology to Bangladesh for the atrocities and genocide the Pakistani occupation forces committed during the 1971 Liberation War, Pakistani journalist Hamid Mir has said once again.
"The time is coming very soon when the Pakistan parliament will demand that the government make a public apology to the people of Bangladesh," Hamid told The Daily Star at an interview yesterday.
The next parliament of Pakistan to be formed after the election in May will make a move to this end, he added.
When Bangladesh Foreign Minister Dipu Moni demanded an apology from Pakistan on November 9 last year, her Pakistani counterpart Hina Rabbani Khar requested her to forget the past.
Hamid Mir is here in Bangladesh to receive the "Friends of Liberation War Honour" conferred on his late journalist father Waris Mir.
Twelve other Pakistani nationals were on Sunday given the award at a programme at the Bangabandhu International Conference Centre in the capital.
The government of Bangladesh has improved the relationship between the people of the two countries by honouring them with the award, Hamid maintained.
On Sunday, the government awarded 69 foreign friends, including 13 from Pakistan, for their contributions to the independence of Bangladesh.
"The Bangladesh government has honoured my father because he opposed the 1971 military operation in Bangladesh," said Hamid. "He visited Bangladesh in October 1971, went back to Pakistan and informed people, by writing a series of articles, that the Pakistani army was committing atrocities and genocide in Bangladesh."
"My father was treated as a traitor in Pakistan and faced difficulties in his social life," he continued. "When we go back to Pakistan many people will raise questions about why we have received the awards."
He went on, "Many people will tell me that your father was awarded at a function where some Indian army officials were also awarded. It will be a tough question because Pakistan and India do not have good relations with each other. But I have the courage to respond like my father did."
About the ongoing war crimes trial in Bangladesh, Hamid said he supports it. "Bangladesh has a right to try the war criminals in a court of law. But the trial must be free and fair."
The government should not give foreign human rights organisations and Bangladeshi newspapers any scope to question the fairness of the trial, he noted.
If the trial is free and fair, he will be in a position to vouch for the trial in Pakistan and encourage people to try the war criminals hiding there, he said. "That's why a fair trial is necessary."
Any doubts about the trial's fairness will only help the enemies of Bangladesh, he observed.
"I am very happy to see Bangladesh is moving in the right direction, becoming prosperous and modern. Bangladesh has become a role model for Pakistan because the government here has solved many problems through democracy."
Bangladesh has reined in extremism and population growth, two major challenges for Pakistan, he added.
About the Bangladesh-Pakistan relations, he said there are "some problems" between the governments of Pakistan and Bangladesh. But the countries should be good friends.
"Bangladesh and Pakistan can at least play good cricket with each other…. Right now we need only one thing, which is cricket diplomacy," he said.