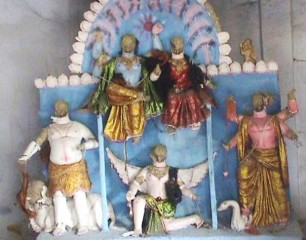 This March 5 photo shows vandalised idols in a Hindu temple in Singra upazila of Natore.

In the wake of a wave of violent attacks against the country’s minority Hindu community, Amnesty International has made an urgent call to the government to provide them with better protection.

Over the past week, individuals taking part in strikes called for by Islamic parties have vandalised more than 40 Hindu temples across Bangladesh. Scores of shops and houses belonging to the Hindu community have also been burned down, leaving hundreds of people homeless, said a press release of the international rights watchdog.

“The Hindu community in Bangladesh is at extreme risk, in particular at such a tense time in the country. It is shocking that they appear to be targeted simply for their religion. The authorities must ensure that they receive the protection they need,” said Abbas Faiz, Amnesty International’s Bangladesh Researcher.

“All political parties in Bangladesh should condemn strongly any violence against the Hindu community, and to instruct all their members and supporters not to take part in such attacks.”

Survivors told Amnesty International that the attackers were taking part in rallies organised by the opposition Jamaat-e-Islami and its student wing Islami Chhatra Shibir.

Jamaat has publicly denied any involvement in violence against the Hindu community.

The latest attack took place on Wednesday in Daudkandi in southeastern district of Comilla, where a Hindu temple was vandalised and burnt down.

One survivor told Amnesty International that on February 28, his family’s village of Rajganj Bazar in the southeastern Noakhali district was set on fire by people taking part in a Jamaat-organised strike.

“They moved into our properties and set fire to 30 of our houses. Seventy-six families were living in these houses. They also set fire to our temples – all are now vanished,” the survivor said, who asked to remain anonymous out of concerns for his safety.

He said the authorities have provided temporary accommodation to the affected families, who had lost almost all their belongings to theft or destruction in the violence.

Another survivor said that on March 2, a group of about 100 young men holding banners in support of Jamaat looted and damaged four shops in Satkania near Chittagong and vandalised a Hindu temple in the village.

Bangladesh’s Hindu minority makes up only eight percent of the population, and has historically been at risk of violence from the Muslim population—including during the independence war in 1971, and after elections in 2001.

“Given the obvious risks the Hindu minority faces in Bangladesh, these attacks were sadly predictable. We urge the authorities to take note of the violence and act to prevent further attacks,” said Faiz.

Tensions have been running high in Bangladesh in recent weeks as JI and its student wing have called strikes and mass protests against the ICT, which has found some of its senior members guilty for crimes committed during the 1971 war.

Protesters have also been involved in violent clashes with police, who have used tear gas, rubber bullets or live ammunition against them. At least 60 people have been killed, mostly by police fire, but among the dead are also several policemen.

“While there are credible reports that police firing may have followed violent attacks against them by protesters, police use of excessive force cannot be discounted”, Faiz said.