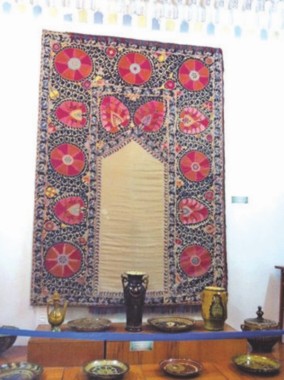 As soon as we step through the gate we notice them. The strutting birds. Symbols of majesty, regal beauty, grace and arrogance. A Palace such as this summer residence of the erstwhile Emirs of Bokhara, which we are here to visit, had already proclaimed itself: Look upon my peacocks and know you are in royal surroundings!
We will soon be duly impressed, but more by the building's interiors and contents, and not so much by these almost mythical birds that sit on trees screeching irritatingly like monkeys or drag their folded plumage around like small turkeys or large hens. I am not overly fond of birds (a Hitchcock-derived legacy?) and claws, beaks and pride are not among my favourite personality features either in the animal or human kingdom.
This palace, located 4 kilometres from Bokhara was built in the nineteenth century by one of the Emirs for his wife Sitora-Bonu and named Sitorai Mokhi-Khosa, the Palace of Moon-like Stars. It has three main sections, the main palace, the octagonal guest pavilion and the Harem. We visit the first, stepping up to the long decorative verandah, pose on the throne set up there, and look at the courtyard, the pulpit like entrance to the building opposite (now a national costumes museum) and the surrounding rose garden with peacock filled trees. The feeling we get is of a lovely summer retreat built for pleasure. 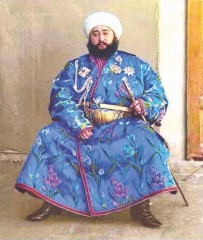 We will walk around the surrounding gardens and parks with their fountains, ornamental lakes, pergolas and loggias later. For now, Fazl leads us inside what are the sumptuous Throne room, the receiving chambers and halls filled with chandeliers and high backed chairs. There is a strong European and Russian imperial air about it all, and yet a great deal of Asian craftsmanship is apparent too, especially in the walls of the waiting rooms embellished with intricately wrought frescos of geometric decorative patterns inlaid in vertical and horizontal panels and niches, as are the mirror walls of the Khona'i Safed or White Throne room.
“These are the traditional Uzbek art of fresco in tempera and gunch stucco lace carvings,” Fazl tells us. “And you are right about the Russian effect because architects from St. Petersburg helped construct the palace and many skillful Bukhara craftsmen were employed to decorate the interior.” I know that by the time the palace was finished the Bolsheviks were ready to break down the gates! So, while I look at the antique furniture, the gilded art objects in the cabinets, the gold on the ceilings, the rich carpets, I cannot help thinking of Nero fiddling while Rome blazed. 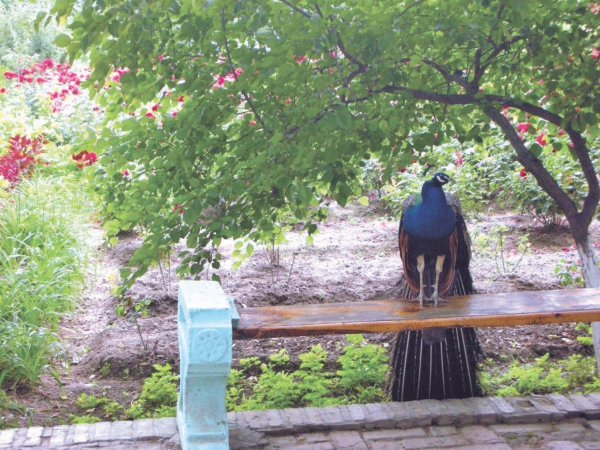 Peacock strutting on the grounds of Summer Palace. 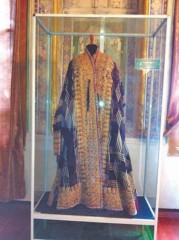 Costume display at a museum in the Summer Palace.

We head towards the more modern palace-complex, built during the rule of the last Bukhara emir Alim Khan during the 1910s and 1920s. The entrance is guarded by two marble sculptures of lions made by local craftsmen. The pavilion that used to be the guest annexe now houses a costume museum (a glittering collection of the 19th-century national dress, hats and belts made by the best gold embroiderers of Bokhara displayed in glass cases) and also various artifacts such as samples of palace furniture, utensils, Chinese and Japanese porcelain. Also old photos of how the people dressed.
To the south of the palace grounds, strolling through paths edged with roses we come to a high pavilion like structure, the Harem, overlooking a lake. While the official wives remained in the city palace, the Emir used to frolick with his concubines here. After the Bolshevik overthrow, the Emir and his four wives went into exile to Afghanistan under the wings of the King in Kabul (who later would himself seek asylum in Rome!). Presently, the Harem is the Museum of Applied Arts. Here we see colourful examples of the tribal art of silk and cotton embroidered quilts and covers called Suzani, now hanging on the walls. 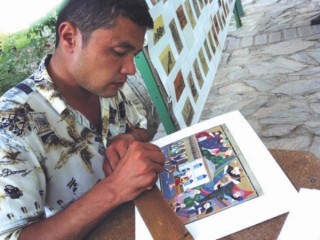 I am glad that a place of frivolity and excess in the Emir's time is now the people's heritage and form part of Bokhara's History Museum. What made the day complete for me, though, was encountering, while walking back through the garden, some Miniature painters who had put up outdoor stalls displaying their work as they worked on new ones.
I stood enthralled behind one as his brush stroked to life figures from the past, from mythology, legend and poetry. The rose scented air of the present afternoon and the peacocks cry breaking the silence of the past, all seemed to mingle with the colours on his paper. I bought the painting that he had just finished, an illustration of a verse from Shahnama by the Persian poet Ferdousi. The Book of Kings. The heroic and non-heroic lives of mere rulers immortalised by the godlike gift of poet and artists. 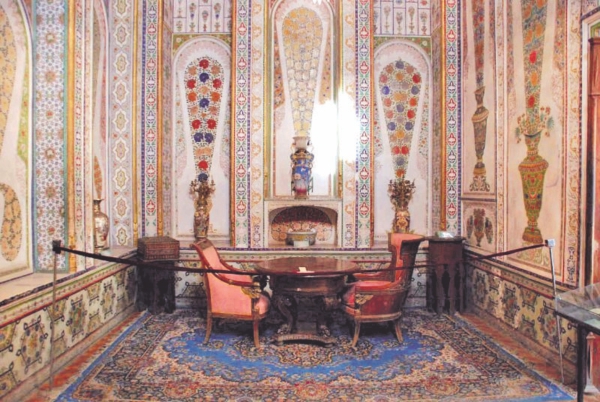 Embellished walls of a waiting room at the Summer Palace.

My artist put away his brush, blew his mortal breath over his still wet signature, took a photo of it, and rolled up his immortal work for me with a smile. I was surprised and relieved to hear the price quoted as much less than in Bokhara's inner city shops. However, I indulged myself by thinking that I might have bought it at any price. After all, I was carrying with me not just a freshly painted haiku, but the best of a miniaturist's art: a moment distilled.