Body of the brilliant student found in Shitalakkhya; father’s role against war criminals could be a motive; hartal called for today in Narayanganj
Our Correspondent, Narayanganj 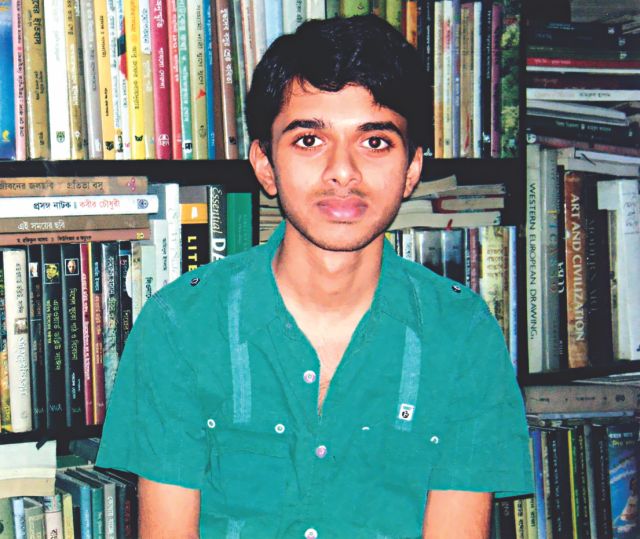 Two days after going missing, the son of Narayanganj Gonojagoron Mancha convener was found dead yesterday morning on the bank of the river Shitalakkhya.
Victim Tanvir Mohammad Toki, 17, son of cultural activist Rafiur Rabbi, a resident of Puratan Court Road area, had just completed his A-level from ABC International School in Chashara area of the town.
The deceased's father told reporters that Tanvir had secured an outstanding result in the A-level exams which was published a day after the boy had gone missing. He had scored 294 in chemistry and 297 in physics out of 300.
Yesterday evening, cultural organisation Sammilito Sangskritik Jote called dawn-to-dusk hartal for today in Narayanganj protesting the killing.
Narayanganj mayor and his father said Tanvir could have been killed for Rabbi's role in Gonojagoron Mancha, a platform set up to demand capital punishment to all war criminals of the Liberation War.
Locals spotted Tanvir's body in Charargop area of the town around 10:15am yesterday and informed the police. About half-an-hour later, police went to the spot and sent the body to Narayanganj General Hospital morgue for autopsy. Police also recovered Tanvir's switched-off mobile phone from his pocket.
Morgue sources said the boy had been strangulated to death. His body bore several bruises on the right eye, throat and face.
Tanvir's father Rabbi identified the body.
Victim's family and police suspect that the roles of Rabbi in convening the Gonojagoron Mancha in the town, the last Narayanganj city corporation election, and other recent civic movements, including reducing bus fare and resuming state-run bus service on Narayanganj route, were the reasons behind the killing. 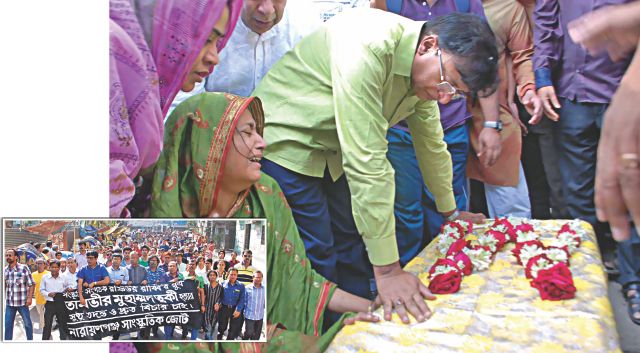 Cultural activist and convener of Narayanganj Gonojagoron Mancha Rafiur Rabbi and his wife are in tears next to the coffin of their 17-year-old son Tanvir Mohammad Toki, whose body was found in the Shitalakkhya in the district yesterday. Inset, Sammilito Sangskritik Jote brings out a procession in the town demanding proper investigation into the killing and quick trial of the killers. Photo: star

Rabbi, vice-president of Narayanganj Nagarik Committee, a citizens' body, said Tanvir had gone out of home on Wednesday afternoon and been missing since. After searching for the boy all over the city, he had lodged written complaints with Rapid Action Battalion and local police, but to no avail, added the father.
He told The Daily Star that his son had no enemies that he knew of, but some quarters might have gotten angry with him [Rabbi], as he had organised the Gonojagoron Mancha in the town and played important roles at different times under the banner of Nagarik Committee.
Rabbi also suspects that his role in the last city corporation election might have something to do with the killing. He supported Selina Hayat Ivy, the candidate who won the election.
Mayor Ivy told reporters that Rabbi's support for her during the election and convening of the Gonojagoron Mancha might have been the reasons behind the killing.
Narayanganj Superintend of Police Syed Nurul Islam told The Daily Star that they had been working to ascertain the motive.
Tanvir's namaz-e-janaza was held at Kalibazar mosque in the town around 4:00pm. He was buried at their family graveyard in Bandar area.
Before the burial, his body had been taken to the Chashara Shaheed Minar.
Stunned by the killing, people of all walks of life including leaders of different social and cultural organisations, political parties and city Mayor Ivy rushed to pay tribute to the deceased.
Several political parties, including Communist Party of Bangladesh and Workers' Party, extended support to today's hartal in Narayanganj.
In the evening, locals brought out a torch procession demanding immediate arrest of the killers.