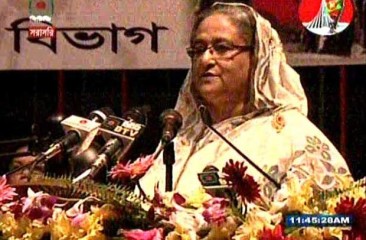 Prime Minister Sheikh Hasina on Monday said the nation must settle the issue of the war crimes trial for its sound progress in future.

"Every nation has brought the elements against their independence to book. So, we have to finish the job for making our next generation's future safe and sound and for their unhindered development," she said.

The prime minister was distributing Swadhinata Purashkar (Independence Award)-2013, the highest state award, at a function at Osmani Memorial Auditorium in the capital today.

Hasina said the anti liberation forces are out to make the country unstable through creating anarchy and lawlessness aimed at protecting the war criminals.

But, the trial of the war criminals is a great expectation of the people of the country particularly the youths, she said.

"They have extended support to us in the last general elections for bringing the war criminals to book, she added.

The prime minister said the government is pledged to face any conspiracy against the war criminals' trial and any anarchy by the anti-liberation force with a strong hand.

"The government will not tolerate any terrorist activities and militancy," she said.

The Swadhinata Purashkar is given every year to Bangladeshi citizens or organisations in recognition to their outstanding contribution to various fields of the national life and help upholding and realisation of the immortal spirit of the freedom struggle of the nation.

This year the award was given to eight distinguished persons. They are: late MA Hannan, martyred M Shamsul Haque, Abdul Hamid Advocate, Dr M Mosharraf Hossain and Lt Col (Retd) Qazi Sajjad Ali Jahir Bir Pratik in the Independence and Liberation War category, late Swadesh Ranjan Bose in the field of economy, late Satya Saha in the field of culture, and Dr Mohammad Abdul Hamid Mia in the area of Research and Training.

The prime minister formally conferred the award on them on the eve of the Independence Day 2013. The award contains a gold medal, a cheque of Tk 2 lakh and a certificate.

On behalf of the award recipients, Dr Mohammad Abdul Hamid Mia expressed his feeling after receiving the award.

Cabinet Secretary M Mosharraf Hossain Bhuiyan conducted the function and readout the citation about the recipients.

The prime minister said people of the country want peace and security. The government will do everything to maintain peace and stability in the society, she said.

She said the trial of the war criminals of 1971 was one of the electoral commitments of the present government to deliver justice to the families of the martyrs of the independence.

The prime minister urged all to work together to make the dream of the independence true and build Bangladesh as a happy and prosperous country in South Asia.

"Let us take oath today to join our hands together to build a hunger and poverty free prosperous and peaceful Bangladesh by 2021 marking the golden jubilee of the independence," she said.

Congratulating the Independence Award recipients, the prime minister said the nation would always recall their contribution to the society and nation.

Laying importance on continued democratic process, the prime minister said, the progress of Bangladesh were disrupted time and again since independence because of discontinuation of democracy.

She said Bangladesh was born to be a secular democratic nation to stand as a dignified nation in the world community and build a poverty and hunger free nation.

"In 1996, we set the country on the right track of development, but the progress suffered obstacles again in 2001 after making the anti-liberation force a partner of the ruling party," she said.

She said people's overwhelming support in 2008 general election was a reflection of their confidence in the 14-party grand alliance to establish a secular, equitable and poverty-free Bangladesh in light of the War of Liberation.

The prime minister said her government over the last four years has freed the country from the impression of being a terrorist sate and a poverty stricken nation.

Some political parties are again out to push the country to that anarchic situation, she said urging people to remain alert about the conspiracy.

Bangladesh is now considered as a role model of development and the country has the capacity to overcome any challenge, she said.

In the last four years about five crore low-incoming people of Bangladesh elevated their position to middle income due to economic progress of the country.

She called for organising the new generation imbuing them with the spirit of the War of Liberation and forging a strong national unity to build a hunger and poverty free prosperous Bangladesh by 2021 marking the golden jubilee of the independence.