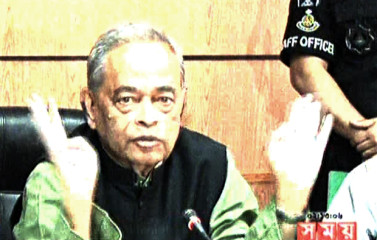 With criticism pouring in over the alleged issuance of shoot-at-sight order to tackle subversive activities, Home Minister Muhiuddin Khan Alamgir on Wednesday did not either make things clear.

Asked whether he issued the order, Alamgir dodged a direct answer.

The instruction was to "take necessary lawful steps" to control subversive activities, the minister claimed at a press briefing at Rapid Action Battalion (Rab) headquarters in Kurmitola in the capital.

Referring to a meeting of chiefs of different law enforcing agencies with the home minister at the latter’s residence in Banani in the capital on Tuesday, top vernacular daily Prothom Alo carried a report on Wednesday on the shoot-at-sight order to contain subversive activities like arson and vandalism on the highways or railway tracks.

“It is not mentioned anywhere in the report that I made the shoot-at-sight order,” Alamgir told journalists Wednesday noon after a closed-door meeting with top Rab officials on the occasion of 9th anniversary of the elite force.

Replying to a query on whether the government would take legal steps against BNP Chairperson Khaleda Zia on charge of inciting the army, the minister said it was under the government’s consideration.

“But I won’t detail this right at this moment,” he added.

State Minister for Home Shamsul Hoque Tuku, who accompanied Alamgir at the briefing, said no efforts of provoking the army would be tolerated.

The ministers were referring to Khaleda Zia’s speech in Bogra on March 24 when she said that the army would not play the role of “a silent spectator while people are getting killed” and that it would “play its role in due time”.