Flashback
The government, it seems, has started to crack down on the bloggers who have made 'blasphemous' comments in their blogs and social networking sites on Islam and its Prophet (Peace be Upon Him). Mashiur Rahman Biplob alias Allama Shaitan, Russel Parvez alias Apobak and Subrata Adhikari Subho alias Lallu Koshai were arrested in a predawn raid from different parts of the capital. All of them are organisers of the Shahbag movement, which is demanding death penalty to all the war criminals and an immediate ban on Jamaat for committing atrocities against unarmed Bangladeshis during the country's war of Independence in 1971. Right after the arrests, two senior ministers, in a presser last Tuesday, have said that the government is planning to make the law more stringent to try those who defame religion. 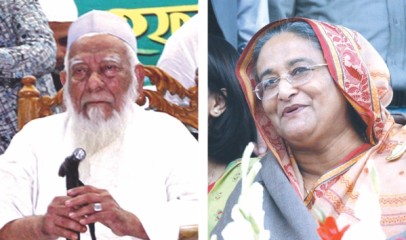 The move has been clearly aimed at appeasing Hefajat-e-Islam Bangladesh (Protectors of Islam; HIB), a qaumi madrasa based organisation with its headquarters in Al-Jamiatul Ahlia Darul Ulum Moinul Islam (Hathazari Madrasa) in Hathazari, Chittagong. Politically speaking, the government has some reason to try to pacify the group. Established in 1896, the madrasa is the second largest University of its kind in the Indian subcontinent. At the primary level, it teaches Fiqh or Islamic jurisprudence, along with Bengali, English and other subjects. At the tertiary level, it has Solar Science, Hadith and Tafsir (interpretation of the holy Quran). It follows Hanafi School of thought and respects its relationship with the Darul Uloom Deoband in India.

The institution has around 50,000 students but its clout goes beyond that. It has hundreds of graduates who are now employed as imams at different mosques across the country, the number of which will be in thousands. To make matters even more serious for the government, Hathazari Madrasa is the highest seat of learning for students of around 40,000 qaumi madrasas that are funded by private individuals. Neither the Awami League (AL) nor the Bangladesh Nationalist Party (BNP) has any fan following in these places.

The HIB first hogged the headlines on February 24 this year by holding a procession in Chittagong, it organised a gathering in the Laldighi Ground in the city and picked up a fight with the cops where a gun was snatched away from a policeman. The group--it refuses to call itself a political party--came up with a 13-point demand on March 9, saying it will launch a long-march to Dhaka from all over the country if the demands are not met. The group's ameer (chief) is Maulana Ahmad Shafi, a religious scholar and the Muhtamim (Rector) of Hathazari Madrasa, which he joined as a student at 10. Fondly called boro huzur by his supporters, Maulana Shafi is also the Chairman of qaumi madrasa board.

You Turn
When the Shahbag movement broke out after Quader Mollah was not given death penalty by the War Crimes Tribunal, the AL, like any other political party, saw it as an opportunity to get some extra mileage. The party, after all, led the country towards independence, and it rightly considers the war of independence its forte. Even when allegations of 'blasphemy' against some bloggers surfaced after the murder of Rajib Haider (Thaba Baba), the party leadership fiercely defended Shahbag. And the party has been true in its defence that not everyone in Shahbag is an atheist. A handful was, and their comments, which were quite blasphemous, were widely circulated to make Shahbag controversial. The presence of these bloggers in Shahbag was discomforting for a section of the AL, add to that is the HIB's pressure and all the centre right parties support behind the long march. The biggest blow perhaps came from within the AL; Shahbag has been a non-political platform and the party should have left it as it is. But the party leadership was worried that the movement would be hijacked or, worse still, that other unpleasant issues such as corruption or misgovernance might pop up in some corner of the roundabout. So it did what any other big party in Bangladesh would do: it tried to gobble the movement up. 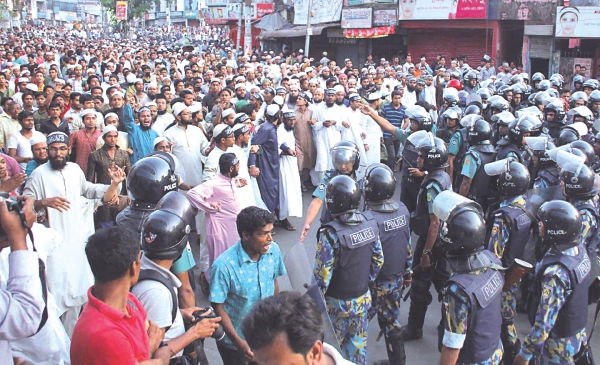 And now the government is trying to pacify the HIB and other like minded groups and arrested some bloggers. The AL, which is the flag bearer of non-communal politics in Bangladesh, according to a newspaper report, has asked HIB elders for some time to pass a bill that will ensure the death penalty for those who defame religion.

It is difficult to tell if the HIB will suspend its long march to Dhaka, but it can be said with perfect certainty that the AL leadership has turned a little right to make sure that it does not have too many enemies on that side of the political spectrum. The AL however will not able to materialise everything that the HIB has demanded as it includes a lot of issues that the party might feel a little more than uncomfortable to handle.

Like the country, the AL is at a crossroads now. The party does not want people to think it anti-Islamic, so it cannot use force to stop HIB's programme; at the same time, it has to make sure Shahbag remains alight in some form or the other.

April 6
Former Awami League MP and leader of government-backed Tarikat Federation Nazibul Bashar has said that all hell will break lose on April 6, the day HIB plans to march into the capital. His prophecy is grim, it makes one think of heaps of body bags strewn all over the potholed streets of Dhaka. The HIB leaders have said that they will remain peaceful. In fact, that was what qaumi students were when they had a gathering last time protesting what they called government interference into their madrasas. On that occasion, the government budged to their demand, they peacefully held a rally of around 200,000, a victory procession, and left Dhaka.

Whether the HIB will remain peaceful this time one cannot tell. We are not even sure whether it will go on with their long march or not. But everyone must show restrain. At the end of the day, our religion is dear to us, it literary means peace, and who knows it better than the boro huzur?

The writer can be contacted at <ahmedehussain@gmail.com>