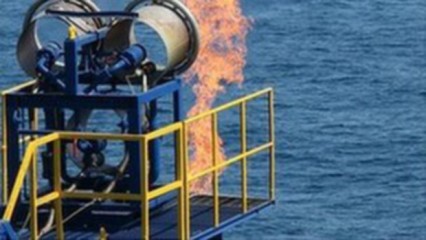 Methane hydrate is also known as burnable or flammable ice.

Japan says it has successfully extracted natural gas from frozen methane hydrate off its central coast, in a world first.

Methane hydrates, or clathrates, are a type of frozen "cage" of molecules of methane and water.

The gas field is about 50km away from Japan's main island, in the Nankai Trough.

Researchers say it could provide an alternative energy source for Japan which imports all its energy needs.

Other countries including Canada, the US and China have been looking into ways of exploiting methane hydrate deposits as well.

Pilot experiments in recent years, using methane hydrates found under land ice, have shown that methane can be extracted from the deposits.

Offshore deposits present a potentially enormous source of methane but also some environmental concern, because the underwater geology containing them is unstable in many places.

"It is the world's first offshore experiment producing gas from methane hydrate," an official from the economy, trade and industry ministry told the AFP news agency.

A survey of the gas field is being run by state-owned Japan Oil, Gas and Metals National Corporation (JOGMEC).

Production tests are expected to continue for about two weeks.

Government officials have said that they aim to establish methane hydrate production technologies for practical use within five years.

This is the equivalent of more than a decade of Japan's gas consumption.

Japan has few natural resources and the cost of importing fuel has increased after a backlash against nuclear power following the Fukushima nuclear disaster two years ago.