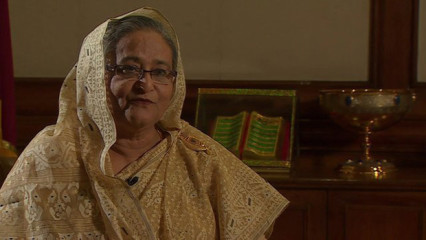 Prime Minister Sheikh Hasina has firmly rejected the demand for a new anti-blasphemy law to punish those who defame Islam and Prophet Muhammad (pbuh).

Reacting to Hefajat-e Islam’s demand for such a law, Hasina said during an interview with the BBC that existing laws were sufficient to punish anyone who attempted to insult religion.

Her comments came a day after hundreds of thousands of supporters of the radical Islamist organisation held a massive rally in the capital's commercial hub Motijheel.

The marchers of the umbrella organisation called for the death penalty for those guilty of blasphemy.

Hasina said: "They have demanded it. Actually, we don't have any plan to [bring in the law]. We don't need it. They should know that existing laws are enough.

"This country is a secular democracy. So each and every religion has the right to practice their religion freely and fair. But it is not fair to hurt anybody's religious feeling. Always we try to protect every religious sentiment."

The radical Islamists have given a three-week ultimatum to the government to meet their demands, including tough punishment to those who they describe as atheist bloggers, who are also accused of making derogatory comments against Islam.

"We will go through all the demands and then we will see. If there is any reasonable one, we will fulfill. If it is not reasonable or not suitable for our country or society we will not accept it," the prime minister said.

She also defended her government's decision to arrest four bloggers last week on suspicion of harming religious sentiment through their work.

The arrests prompted eight blog operators to black out their websites, with liberals accusing the government of yielding to Islamist pressure.

But the prime minister dismissed those accusations.

"No, [it's] not that. If anybody tried to hurt any sentiments of any religion or any religious leader, there is a law. We can take any action."

Bangladesh has been rocked by a series of protests by opposition parties in recent weeks.

The Jamaat-e-Islami, Bangladesh's largest Islamist party, has been holding demonstrations demanding the immediate release of its leaders, who are facing war crimes charges. Two of its senior leaders have already been convicted by a special tribunal. Seven more are still facing the trial.

More than 80 people have been killed in clashes in the last few months, most of them shot by police. Human rights groups have accused the security forces of using excessive force to control the riots.

"Security forces are law enforcing agencies, they have to protect people and people's property. You know many police officers were killed… If police are under attack, what will they do?" Hasina said.

The BNP has made it clear that it will not take part in any election held under the incumbent government because it says the polls will not be free or fair.

"If they don't participate in the election, as a political party they will lose their seats," Hasina said.

With increasing political violence and instability, there is apprehension that the government might declare a state of emergency to bring the situation under control.

But the prime minister firmly dismissed those fears, saying the government had no plans to impose emergency rule.