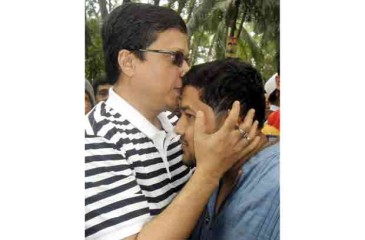 BNP standing committee member Khandaker Mosharraf Hossain on Saturday accused the government of abetting the owner of collapsed Rana Plaza at Savar to flee the scene on the fateful day.

“You (govt) helped the Rana Plaza owner, Sohel Rana, to flee. He isn’t found now. His relatives have been arrested as part of an eye-wash,” he said.

The BNP leader came up with the allegation while addressing a protest rally at the National Press Club.

Rana Plaza, a nine-storey building, which housed five garment factories collapsed on Wednesday morning, killing over 346 people and injuring over a thousand.

Criticising Prime Minister Sheikh Hasina for her speech in parliament that Sohel Rana does not belong to pro-government Jubo League, Khandaker Mosharraf said, “Her speech proves, the prime minister wants to save the Rana Plaza owner.”

The BNP policymaker also accused Home Minister MK Alamgir of trying to shift the blame on the opposition and said, “He is talking like shameless person to divert people’s attention to a different direction.”

In a separate programme at the club, another BNP standing committee member MK Anwar slated the prime minister, saying, “She (Hasina) not only demeaned herself but also the whole nation by speaking untrue in parliament. We feel ashamed of that.”

Anwar was addressing at a token-hunger programme organised by South Keraniganj Thana unit of BNP demanding the release of the BNP leaders.

The bureaucrat-turned politician, however, thanked the ruling party leaders for criticising the home minister for his unguarded remarks over the Savar building collapse.