Ekushey: A turning point in our history | The Daily Star
Skip to main content
বাংলা T

Ekushey: A turning point in our history 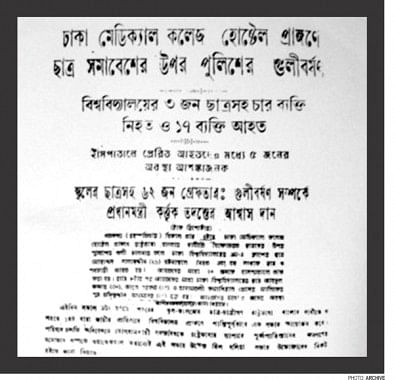 21ST February, 1952, popularly known as Ekushey, is not just a date in our calendar. It is a part of history written with the blood of the martyrs of our language movement. The history goes back to the creation of Pakistan, in 1947, having two parts, East Bengal (later East Pakistan and now Bangladesh) and West Pakistan, physically separated by more than 1000 miles with India in between. The people of the two parts were different culturally, ethnically and linguistically.
Soon after its creation, the government of Pakistan, controlled by the West Pakistanis, wanted to impose Urdu as the only state language of the country. The Bengalis, to whom Urdu was a foreign language, realized that it was a ploy by the West Pakistanis to colonize East Bengal.
The proposal to make Urdu the only state language of Pakistan was raised before the birth of the country. Dr. Muhammad Shahidullah, a renowned Bengali scholar, countered the proposal by arguing that Bengali being the language of the majority of the population should be the state language of Pakistan. He added that Urdu could be considered if two state languages were acceptable.
The government of Pakistan excluded Bengali from all postal stamps, coins and official forms. In October 1947, a "State Language Action Committee" was formed in Dhaka as a platform to promote the cause of Bengali. On December 5, 1947, the students of the University of Dhaka organized a demonstration in support of Bengali.
On February 25, 1948, a proposal by Dhirendra Nath Datta, a member from East Bengal, to use Bengali along with Urdu and English in the Pakistan Constituent Assembly was arbitrarily rejected. On March 11, 1948 a general strike was observed throughout East Bengal demanding Bengali as one of the state languages of Pakistan.
Without taking into consideration the wishes and sentiments of the majority of the population, Mohammad Ali Jinnah, then governor general of Pakistan, unilaterally declared in Dhaka in March 1948 that "the state language of Pakistan is going to be Urdu and no other language." Protests against the declaration were ignored.
The intention of the government of Pakistan was not only to impose Urdu on the Bengalis but also to change the scripts of Bengali language. It was proposed to write Bengali in the Arabic or Urdu scripts and to infuse Urdu or Arabic words replacing the Bengali words originating from Sanskrit. The Bengalis vehemently opposed the idea as it was a direct assault not only on their language but also on their culture.
Khawaja Nazimuddin, then prime minister of Pakistan, announced in Dhaka on January 26, 1952 that Urdu would be the state language of Pakistan. This announcement provoked a fresh wave of protests in Dhaka. A new "All Party State Language Action Committee" was formed and February 21 was declared to be observed as the State Language Day. The government banned all meetings and processions on that day.
The students decided to defy the ban. They held meetings and brought out processions from the University of Dhaka. As they were approaching the present Jagannath Hall where the provincial assembly was in session, the police first charged with tear gas and then opened fire on them. Consequently, several students and activists including Abul Barkat, Abdus Salam, Rafiq Uddin Ahmed and Abdul Jabbar were killed. The news of their martyrdom spread like wild fire throughout East Bengal.
For several days, students all over East Bengal organized demonstrations throughout the province. I recall, as a student of class VIII, I joined the movement. People from all walks of life took part in the processions in support of Bengali and demanded punishment to the killers of the martyrs. Next year, 21st February was observed as "Shaheed Dibosh" (Martyrs' Day). The Bengalis observe day every year almost like a ritual. No nation on earth becomes more emotional than the Bengalis when they recall the sacrifices of the language martyrs.
Ekushey was a turning point in our history. It resurrected Bengali nationalism among the Bengalis. Even though Bengali was accepted as one of the state languages of Pakistan in the constitutions of 1956 and 1963, the mistrust that was created in 1952 between the peoples of the two parts of the country never faded.
In fact, the mistrust intensified further as the Bengalis were being exploited both economically and politically by the West Pakistanis. It manifested in the results of the provincial election of 1954 and the crucial general election of 1970. The West Pakistanis refused to transfer power to Bangabandhu Sheikh Mujibur Rahman (a prominent activist of the language movement) in 1971 even though he won an absolute majority in the Pakistan National Assembly. Bangabandhu called for a non-cooperation movement. The West Pakistanis responded with bullets. Bangabandhu declared the independence of Bangladesh on March 26, 1971 and called for resistance against an atrocious Pakistan army.
The seed of independence of Bangladesh was in fact sown on 21st February 1952 when the first bullet was fired. It took a little over 19 years to grow into a tree and bear fruits. The spirit of Ekushey and Bengali nationalism inspired the freedom fighters throughout the war of liberation. Consequently, we won the war on December 16, 1971.
The spirit of Ekushey gradually spread its wings beyond the borders of Bangladesh. On November 17, 1999, the UNESCO declared February 21 as the International Mother Language Day. Now, people all over the world observe the day every year to pay respect to the martyrs who shed their blood for their mother tongue.

The writer is a former Chief Engineer of Bangladesh Atomic Energy Commission.