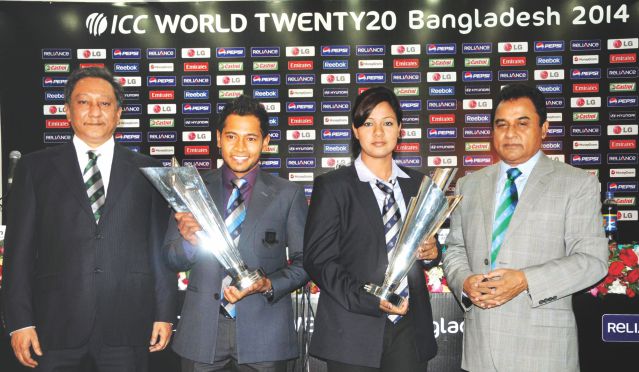 THE COUNTDOWN BEGINS: Bangladesh captain Mushfiqur Rahim (2nd from L) and Bangladesh women's team's former vice-captain Sathira Zakir Jesy (2nd from R) hold the ICC World T20 trophies at the BCB headquarters in Mirpur yesterday, exactly a year before the finals of the glitzy tournament which will be played across Bangladesh from March 16 to April 6 next year. Also seen in the picture are ICC vice-president AHM Mustafa Kamal (R) and BCB president Nazmul Hasan Papon. Photo: Star

The Bangladesh Cricket Board (BCB) promised to uphold their tradition of hosting successful multi-nation tournaments when they host the ICC World Twenty20 2014.
It will be the biggest multi-nation tournament ever held in Bangladesh in terms of participating teams, as 16 men's teams -- 10 full members and six qualifiers -- and eight women's teams will take part in the mega event which will be played from March 16 to April 6 next year in four venues across the country.
The country previously hosted multiple Asia Cups, the International Cricket Council (ICC) Mini World Cup in 1998 (the inaugural edition of the Champions trophy), the ICC Under-19 World Cup and most importantly the 2011 ICC World Cup. Eight matches of the mega event in 2011 including the opening ceremony were held here, as Bangladesh were co-hosts along with India and Sri Lanka. On all the aforementioned occasions the country not only proved their worth as successful organisers but also spectacularly showcased Bangladeshis' passion for the game on the world stage.
With this track record in mind, ICC vice-president AHM Mustafa Kamal and BCB president Nazmul Hassan Papon proudly pointed at Bangladesh's reputation as a successful host of international events while speaking during the launching ceremony of the ICC World Twenty20 2014 at the Sher-e-Bangla National Stadium in Mirpur yesterday.
Bangladesh captain Mushfiqur Rahim and national woman cricketer Sathira Jakir Jesy vowed during the press conference, which was arranged exactly one year before the scheduled final of the 2014 tournament, to make the occasion memorable by performing well in the global event.
BCB boss Papon found no reason to be worried about the preparations as he believes that the venues, including Sylhet and the proposed Cox's Bazar stadium for the women's tournament, will be ready on time.
“We are thinking about increasing the capacities of the stadiums considering the demand. Preparations are well underway in Mirpur, Chittagong and Sylhet and work  will begin shortly on the new stadium at Cox's Bazar. Hopefully we will get the land for the Cox's Bazar Stadium tomorrow and our first focus will be on preparing the pitches. We need to work on floodlights, dressing room and media facilities in Sylhet and that will take two months to complete,” said a confident Papon when asked about the slow progress.
“I can promise you that we will deliver an event that cricket can be proud of and most of all, it will be a tournament from which the people of Bangladesh can draw great pride,” he added. Meanwhile, ICC's venue inspection team will visit the country on April 17. 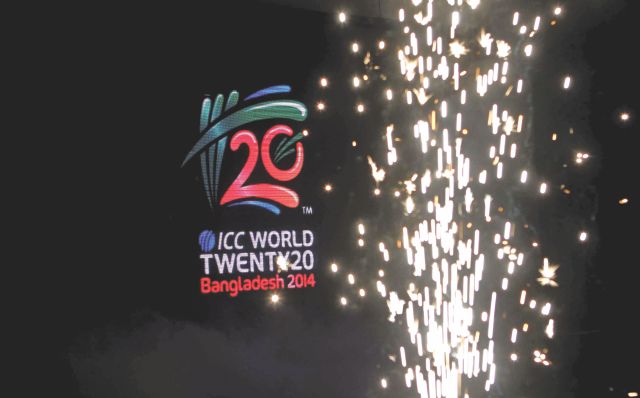 The ICC World Twenty20 logo was unveiled amid fireworks at the Radisson Blu Water Garden hotel yesterday. The event will take place in Bangladesh next year. Photo: Star

There is no tradition of opening ceremonies for the T20 mega event, but Papon said that they may stage such an event the day before the start of the tournament.
“As a Bangladeshi, I am delighted that the ICC World Twenty20 is coming to my country for the first time. Bangladesh has a great record for delivering world-class events and I know that the ICC will work closely with my friends and former colleagues at the Bangladesh Cricket Board to make this event a success,” Kamal said.
Both Kamal and Papon, also parliament members of the ruling party, said that they were not worried about the current political turmoil in the country, reminding everyone of the unifying powers of cricket in Bangladesh.
“The atmosphere around the ICC Cricket World Cup 2011 (which Bangladesh co-hosted) was special but I am sure that the ICC World Twenty20 will generate even more excitement and passion among our supporters. This event pushes Bangladesh cricket back onto the world stage and I am sure our players will rise to the occasion,” said an excited Mushfiqur.
“Playing as the host country in any event is a great honour and I think in the ICC Cricket World Cup 2011 and the Asia Cup 2012 we have shown that the Bangladesh team can raise their game and pull off some impressive victories.  I am personally very excited and for me the ICC World Twenty20 cannot come soon enough,” he added
Jesy, who has missed the current Bangladesh women's team's tour to India, said: “Bangladesh were privileged to host the ICC Women's World Cup qualifiers and I think many of the opposition players were surprised at the size of the crowds, which regularly topped 10,000, for the event. When we played Pakistan and Sri Lanka in a tri-series in recent years the stadium in Mirpur was packed-to-capacity. You cannot help but be inspired by such crowds.
“This will be the first time the Bangladesh women will play in the ICC World Twenty20 and I think we have shown in India that, despite the fact that we lost 3-0, the quality of our cricket is improving and will continue to do so over the next 12 months. I know that all the girls will relish the chance to play in this historic event for women's cricket in Bangladesh,” she continued.
ICC head of media and communications Colin Gibson conducted the meet yesterday at Mirpur and later the ICC World Twenty20 2014 logo was unveiled at a gala event at a local hotel.