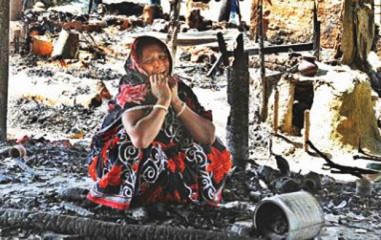 Having lost everything, Nipu Sheel wails sitting on the debris of her house that was set ablaze by Jamaat-Shibir men at Banshkhali in Chittagong. The religious fanatics looted and torched houses and temples of the Hindus in the district on February 28.

Fanatics vandalised idols and torched temples in Comilla, Netrokona and Bhola districts in the dark of Tuesday night, creating widespread panic among the local Hindu community.
In Comilla, miscreants vandalised a Hindu temple and set it ablaze at Chapatali village of Mohammadpur East Union under Daudkandi upazila early yesterday, said Abul Faysal, officer-in-charge of Daudkandi Police Station.
Subhash Bhoumik, a resident of Chapatali, said locals kept vigil around the temple till 2:30am yesterday in the wake of attacks on minority communities across the country, reports a correspondent from Comilla.
“We found the tin-shed temple in the morning totally gutted,” he said, adding “Five idols of gods and goddesses were destroyed.”
In Netrokona, around 120 kilometres northeast of Daudkandi, another Hindu temple came under attack in the same way in the early hours yesterday. Miscreants destroyed five Hindu idols before setting the temple ablaze at Bangla-Dashpara village under Netrokona Sadar upazila, reports our district correspondent.
Police and the local Hindu sources said the temple was situated on a field around half-a-kilometre away from the village.
Around 11:00 pm on Tuesday, locals saw a fire coming out of the temple. The villagers immediately rushed to the spot and brought the fire under control.
Tapan Chandra Talukder, a resident of the village, said they did not know who attacked the temple and when it was set on fire. “The entire community is living in fear.”
Anil Chandra Das, another resident, told this correspondent that none was arrested so far in connection with the incident.
Anis Mahmud, deputy commissioner of Netrokona, and Police Super Mohammad Zakir Hossen visited the spot.
In Bhola, miscreants vandalised the idol of Hindu goddess Kali at a Hindu temple at Pakkhiya union of Borhanuddin upazila early yesterday.
Bhobotosh, a custodian of the temple, told The Daily Star that they witnessed some four to five men moving suspiciously near the temple on Tuesday night.
Chapa Rani, wife of Bhobotosh, found the idol vandalised when she went to the temple to worship in the following morning, reports our Bhola correspondent.
Gouranga Dey, secretary of the district Puja Committee, said, “We have requested the authorities concerned to take necessary action for safety of the minorities.”
On the same night, another group of miscreants set ablaze the cowsheds of 26 houses in Kachiya union of the same upazila. Locals alleged that those were burnt to create panic in the area.
Police arrested Abdul Mannan, 50, a local, in connection with his alleged involvement in the incident.
Moshiur Rahaman, deputy assistant director of Rab-8, said they took necessary steps to find out those responsible for vandalism and fire.
Meanwhile, Noakhali police arrested Harunur Rashid, general secretary of Rajganj union unit of BNP, yesterday evening in connection with his alleged involvement in looting and vandalising six temples and eight houses of the Hindu community in the union on February 28.
Mahbubur Rashid, acting superintendent of police of the district, confirmed the arrest of Harunur, also chairman of the union parishad.
In a press statement, Bangladesh Development Initiative (BDI), a US-based non-partisan advocacy group, yesterday strongly condemned the recent spate of violence especially on minorities and their places of worship across the country.