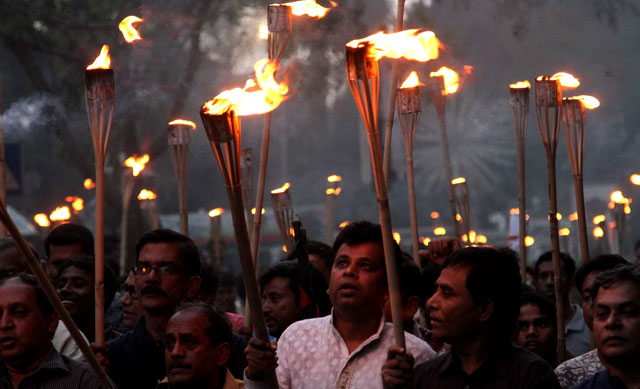 Thousands of people take part in a torch rally at Shahbagh in the capital on Friday evening. Photo: Palash Khan

Several thousand people, including the members of 24-organisations that called the countrywide shutdown, held a torch rally in the capital Friday evening in support of the hartal to resist the Hefajat-e Islam long march towards Dhaka.

The Ghatak Dalal Nirmul Committee and 23 other pro-liberation organisations enforced the shutdown from 6:00pm Friday to resist the long march scheduled to be held on Saturday.

The Shahbagh youths have been demonstrating for the death penalty to war criminals who committed crimes against humanity during the country's Liberation War in 1971.

Sammilito Sangskritik Jote, one of the key organisations, organised the torch rally that started from Jatiya Press Club and ended their programme marching through Bangladesh Secretariat, Zero point, Gulistan and Paltan.

The pro-hartal activists also held torch rallies across the country.

Meanwhile, the 22-hour countrywide rail, road and waterway blockade has also started from 6:00pm to counter the Hefajat long march.

On the other hand, the 27-hour hartal in Chittagong called by the local unit of Ghatak Dalal Nirmul Committee on the same ground has also been going on simultaneously from 3:00pm.

“We will not let any vehicles enter or exit the city during the hartal hours,” he said.

During the strike, they occupied highways, launch terminals and bus and railway stations.

The Islamist party had earlier announced the long march programme to press home its 13-point demand including arrest and trial of bloggers for “defaming” Islam and Prophet Muhammad (pbuh).

The authority postponed the schedules of the two trains at around 8:15pm.