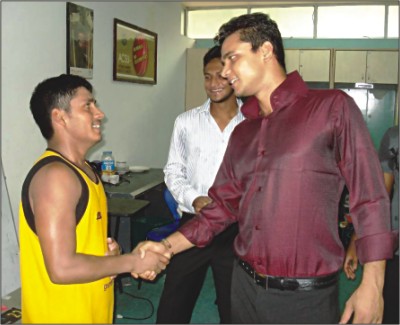 Mashrafe Bin Mortaza is the first paceman in the country to lead the national team as Bangladesh Cricket Board (BCB) on Tuesday appointed him as captain and Shakib Al Hasan as his deputy for the tours of West Indies and Zimbabwe.
The 25-year-old cricketer, dubbed as Narail Express, took over the helm as the fifteenth skipper of the country from Mohammad Ashraful, who was sacked following the Tigers' early exit from the ICC World Twenty20, which created huge tumult in the cricket fraternity.
BCB however said that they took away the captaincy from Ashraful to get maximum batting service from the 24-year-old right-hander, who played some memorable innings in his eight-year career though the main problem lies in consistency.
"The Board wants to sincerely thank Mohammad Ashraful for his contribution as skipper. The decision to replace him was taken with the intention of relieving the load on Ashraful so that he can play his natural game. We all know his quality and what he is capable of as a batsman and we are confident that without the burden of captaincy his batting would flourish and he would contribute more to the team," BCB spokesman Jalal Yunus explained the reason behind the removal of Ashraful.
"We believe we have picked the ideal person as captain [Mashrafe Bin Mortaza]. Apart from his obvious match-winning ability Mortaza is a proven fighter and has the experience. He can inspire and motivate the team. This is a new challenge for him and we know that he loves challenges," added Yunus.
With the announcement, the game's governing body put an end to the speculation over the last few days and now the focus would be on Mashrafe, who so far played 35 Tests and 103 ODIs since making international debut in 2001, to show how he handles the situation and goes about the hot job.
"I think we lack mental confidence and this is the area I want to work on. I am feeling good because it's a big thing to lead the national team but at the same time it's a difficult time. But as a senior member of the team, I am prepared to take the responsibility and challenge," said Mashrafe, who guided Abahani to league championship.
"As a bowler I don't think it's an additional pressure. I have eight years' international experience with me, so I hope I can enjoy the job," he said replying to a question whether it'd be difficult for him to lead the team as a bowler as it's not so common in international arena.
"But what I can say is that I want to lead the team with pride even if it's for one match. And I am not worried with the criticism because it's part of the game. I think we had some good performance under the leadership of Ashraful and I will definitely seek assistant from him whenever needed," he said.
For Mashrafe, the main concern is his every so often injury which many thought could be a real barrier for him to be given the responsibility but the man himself was hardly bothered with the problem as he has full confidence in his deputy.
"Injury is part of life and I think in my absence Shakib can lead the team because he is a matured cricketer after spending four years in international scene," said Mashrafe.
Mashrafe also heaped praises on outgoing skipper Ashraful under whom he acted deputy for long. "Ash is a big name in our cricket and he earned lot for us and an useful batsman in all format of the game. Hope we get maximum from him," he said.
It was however not a day for Ashraful to say something because he was not ready to quit the job but still checked his emotion to congratulate the new captain and vice-captain while talking with the reporters at the Sher-e-Bangla National Stadium in Mirpur.
"I want to congratulate new captain and vice-captain and hope we will be able to play good cricket in our next tour to forget the debacle in the last World Cup. I will try my best to help the team," said a gloomy Ashraful, who was not ready to take any questions from the reporters.
Ashraful took over the captaincy from Habibul Bashar in June 2007 and under his leadership in 38 ODIs Bangladesh managed to win only eight games, with a majority of those against the minnows. The significant victories were against Sri Lanka and New Zealand. The team also failed to win a Test under him, losing 12 out of 13. He also under-performed as a batsman in both forms, averaging 22.58 in Tests and 25.60 in ODIs.