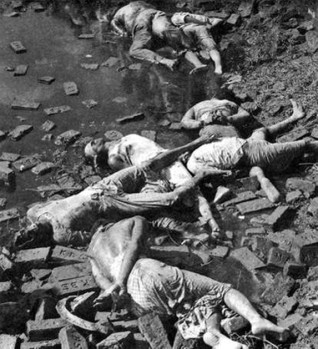 I draw the attention of readers to what former chief justice of Bangladesh Supreme Court Mostafa Kamal told The Daily Star on October 27: "Now it is being said that no war criminal exists in the country. May be after some time it would be said that the Liberation War never took place. This will mean we will be deprived of the real history."
Not only as a citizen, but also as an active or armed freedom fighter of the Bangladesh War of Liberation in 1971, I am shocked at the remarks leaders of a political party called Jamaat-e-Islami made to reporters after a meeting with the Election Commission on Thursday, October 25.
Chief Justice Mostafa Kamal expressed his suspicion that some day the detractors of the War of Liberation will deny the war itself. Justice Mostafa Kamal did not have to wait long.
At about 9.30 p.m. on Friday, October 26, in a television talk show on Ekushey TV titled Ekushey Shomoy, Mr. Shah Abdul Hannan a former secretary to the government of Bangladesh said that there was no Liberation War of Bangladesh, instead what happened in 1971 was civil war in Pakistan. Mr. Shah Abdul Hannan, in all possibility, represents a thought process of like-minded people who have decided to deny the War of Liberation by calling it civil war. Mr. Hannan is not alone. We need to answer these questions or in other words resolve this issue once and for all.
Many said, in the past, that to raise the issue of freedom fighters and non-freedom fighters is tantamount to dividing the society or opening old wounds or impeding national unity. As a freedom fighter I strongly submit that I have no intention to include among my nation such people who do not recognise the War of Liberation.
The denial of the War of Liberation is something like a child denying the fact that he was born of his mother and that his mother suffered much birth pangs during his birth. May I ask a question to Jamaat-e-Islami and Mr. Shah Abdul Hannan: "Pakistan government in 1971 used to say that the situation in East Pakistan in 1971 was an internal law and order problem. In 2007 Mr. Shah Abdul Hannan says it was a civil war. Question: Was Bangladesh born because of political struggle alone or because of the recommendations of politicians only?"
At least on five successive March 26s (that is in 2002, 2003, 2004, 2005, and 2006) Mr. Matiur Rahman Nizami and Mr. Ali Ahsan Mohammad Mojaheed of the Jamaat-e-Islami joined the ranks of other ministers at the national memorial at Savar, because that is the independence day of Bangladesh. Why did these two the then-ministers go to Savar if they did not believe that March 26, 1971 was not the day of independence of Bangladesh!
On the contrary, if they believe the date to be the day of independence, then how can there be a civil war between two different countries (that is a country called Bangladesh and another country called Pakistan). It had to be a war between the forces loyal to Bangladesh and forces who were "occupying" Bangladesh.
Mr. Hannan and his like-minded colleagues must be made to answer, albeit in an honourable and gentlemanly way.
It is high time that we resolve this issue once and for all. No national reconciliation is possible with any segment of the people who deny the process of birth of this country. The blood shed by the millions of martyrs in 1971 will not pardon the present generation or more specifically the freedom fighters who are still living for not ensuring due recognition of the War of Liberation. In this context, I have three specific proposals.
Proposal number one is about a commission. The background to this proposal is similar to the background which necessitates the Anti-Corruption Commission in Bangladesh. There is no dearth of reports in the print or electronic media about corruption by members of the political governments between 1991 to 2006. These reports alone are not sufficient to prosecute the people. Formal efforts are needed, that is why the Anti-Corruption Commission does the investigation, charge sheeting, and prosecution.
Similarly, there is no dearth of reports about opposition to the War of Liberation and atrocities by the opponents of the war. Therefore, to formalise the investigations and prosecution in a legal manner, there must be a high powered legal entity.
The name of the commission can be something like "Fact Finding Commission 1971" or "Political and War Crimes Finding Commission 1971" or "History Commission on Liberation War 1971" or some such. Wise people can find a good name.
The terms of reference may include among other matters:

Priority is for a wide and deliberative enquiry into the entire range of crimes, but if wide ranging enquiry is not possible, then at least enquiry into the possibility of commission of war crimes by those who opposed the freedom fighters of Bangladesh, with armed actions or otherwise, must take place.
The proposed commission may be composed of three retired chief justices or justices of the Appellate Division of the Supreme Court, three retired freedom fighter general-officers of Bangladesh armed forces, three freedom fighters of 1971 from among general citizens, three former vice-presidents of the Supreme Court Bar and three eminent lawyers of international repute or of international human rights organisations recognised by the United Nations. The composition is also open to further thought and refinement.
Proposal number two is related to the government's decision-making process. I hope and pray that the present government will take the courageous step of addressing this issue of formally identifying the forces opposed to the Liberation War of 1971 and crimes committed by the opposition.
Should the government feel shy or diffident to touch the subject, then the government may refer the matter to the Bangladeshi/Bengali Nation through an independent referendum or referendum-cum-election. But the matter should, repeated should, be addressed. In particular I appeal to the armed forces of Bangladesh who are directly the professional descendents of freedom fighters.
Proposal number three relates to our media. In the absence of an elected parliament, the media needs to play this vital role that I am humbly suggesting. Let all the independent TV channels of Bangladesh organise discussions on the screen, to raise an awareness about war of liberation, the activities of the freedom fighters and the activities of the anti-liberation forces in 1971 so that the people of Bangladesh can take a decision.
We have paid enough price for neglecting the subject, we want to pay no more.
Maj. Gen. (retired) Syed Muhammad Ibrahim, Bir Protik, is a freelance contributor to The Daily Star.