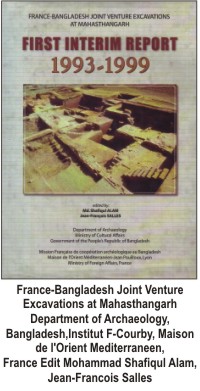 Archaeology is related to the renovation, resurrection and reconstruction of non-documented and extinct history of ancient men through the analysis of their material remains conveying their cultural tradition, often hidden within ancient mounds.
Mahasthangarh represents Pundranagar or Pundanagala, the earliest urban centre of Bengal. It is located eight miles north of today's Bogra township of Bangladesh and is in contact with the Barind high terraces in the west, and the Teesta-Karatoa alluvial plain demarcated to the east, the Brahmaputra. cultural relics and remnants in this area lucidly testify to the existence of the urban settlement of early historic and medieval periods. This remarkable archaeological site was first identified by Sir Alexandar Cunningham in 1879. But the first regular excavation was conducted by the Archaeological Survey of India after 50 years in 1928-29 and the work was limited to three small mounds of the site. Subsequently the excavation work was sporadically carried out till 1992. But the investigation initiated at Mahasthangarh in 1993 by the Franco-Bangla mission under an agreement between the governments of France and Bangladesh in 1992 gave a new impetus to Mahasthan Archaeology. The scientific excavation carried out on a new method has been helpful in collecting and recording a large assemblage of cultural materials ranging in date from 4th century B.C. to 13th/14th century A.D. in their proper contexts.
The book contains 13 articles in total. The articles mostly deal with historical and environmental perspectives of the site, radiocarbon dates from Mahasthangarh, coins, northern black polished ware complex, readings of beads, ceramics and domestic wares from Mahasthan and exploration at Parasuram's Palace Site.
Monica L. Smith, the author of the third article of the book, "The Archaeological Hinterlands of Mahasthangarh: Observations and Potential for Future Research", categorizes the archaeological history of this site into five periods. Those are the early historic (3rd century BC to 2nd century AD), Gupta (3-6th centuries AD) dynasty period, Pala (8-12th centuries AD) dynasty phase, Sena dynasty period (12th century AD) and Early Islamic (13-16th centuries AD).
"No archaeological remains prior to the late fourth century B.C. have ever been recovered from the region of Mahasthangarh, which suggests that the initial population selected this area and quickly built up the site, possibly as a trading center given its favorable location on the banks of the Karatoya river. The excavations at the Eastern Rampart site since 1993 have provided stratigraphic information about successive phases of the site," Smith tells us.
The archaeologist reminds us of the later Gupta-era sculptures from the site of Mangalkot, recovery of early-phase Gupta sculptures from the site of Balai Dhap at Mahasthangarh, two Gupta coins from the village of Bamanpara and a bronze image of the 5th century AD from the adjacent village of Saralpur. The author, in addition, quotes 7th century Chinese pilgrim Hiuen Tsang, who wrote that in the country of Pun-na-fa-tan-na (Pundravarddhana), "there are about twenty sangharams (monastries) with some 3000 priests…(and) there are some hundred Deva temples, where sectaries of different schools congregate (page:68). "
In relation to the Pala dynasty period (8-12th centuries AD), the writer observes that the current excavations have shown a resurgence of a relatively rich material culture during this time frame. " The distribution of different site types around Mahasthangarh indicate that the area to the northwest of the city continued to be an area with substantial Buddhist activity, while the area to the south contained habitations and semi-autonomous communities (page: 69)," Smith adds.
In the first and introductory article, "The Archaeology of Mahasthan: Historical and Environmental Perspectives," Jean-Francois Salles and Md. Shafiqul Alam recollect numerous important historical records and events including those related to Buchanan's Description of Dinajpur district (1833), 18th century district gazetteer depicting the rebellion of Maznu Shah against the British rulers who used to take shelter in the rampart of Mahasthangarh, a certificate in Arabic which gave Mahasthan territory to a governor in 1685, the Persian inscription of the mosque dated 1130 H./ 1718 AD and others.
According to the authors, "Finally, beyond the fact that it was an important centre on the route from the Himalaya to the Indian ocean, Mahasthangarh was intricately related to the civilizations of the Gangetic Valley, as shown by various findings such as the Northern Black Polished Ware, the terracotta plaques of "Sunga-style," the punch-marked coins, and even a bronze mirror certainly coming from Gandhara. (page: 13)."
The more the book advances, it turns out to be more complex with purely technical terms of archaeology which might be a bit difficult to be grasped by common readers. The book, however, contains lots of images of coins and terracotta plaques of different ages from the fifth century AD to the 18th century, numerous radio carbon images of the excavation sites, mounds, fortified walls, temples and monasteries, sketches and drawings and even satellite images of the related river systems of North Bengal and Mahasthangarh or Bogra in particular.
The book ought to be made available to interested researchers, academicians, students of archaeology and history buffs. The Department of Archaeology might also consider translating the work into Bengali so that general readers in our country can have an access to it.

Audity Falguni is a writer, researcher and journalist .