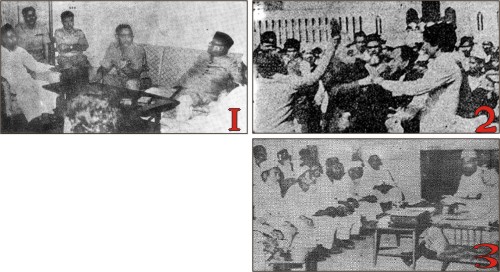 Top Liberation War heroes said yesterday a number of Jamaat-e-Islami leaders are proven collaborators in the genocide in 1971, and demanded they be brought to justice immediately.
Blasting Jamaat for its anti-liberation role, they said this party is now denying established historical truth, and demanded banning it.
The renowned freedom fighters were talking to The Daily Star in reaction to Jamaat Secretary General Ali Ahsan Mohammad Mojaheed's claim that they did not work against the Liberation War and that there are no anti-liberation forces and war criminals in the country.
The war heroes include the deputy chief of liberation forces and sector commanders in the Liberation War.
Maj Gen (retd) AKM Shafiullah, who was commander of sector-11, said, “There is enough evidence to prove that they (Jamaat) were against the Liberation War.”
Had they not been an anti-liberation force, so many people would not have to die in the war, said the former army chief. “This is time to make them face trial.”
Lt Gen (retd) Mir Shawkat Ali, commander of sector-5, said, "Ali Ahsan Mojaheed is just trying to befool the people. Everybody in this country suffered in the hands of anti-liberation forces like Jamaat.”
“If anti-liberation forces never existed (as Mojaheed claimed), then he should ask his conscience why 30 lakh people were martyred and three lakh mothers and sisters lost dignity during the war,” he posed the question to the Jamaat leader.
Shawkat further asked, "Who were the 'AL-Badr' and 'Al-Shams' (involved in genocide) and who were their leaders?"
Retired Air Vice Marshal AK Khandakar, deputy chief of the liberation forces, said, “They (Jamaat leaders) cannot deny history by telling lies. The people have rejected their false claims.”
Alleging that Jamaat is denying a "historical truth,” he urged the government to ban the party.
Lt Col (retd) Kazi Nuruzzaman, commander of sector-7, said “To defeat these forces, all pro-liberation ones must unite to come to power in the next elections. We have to do this ourselves.”
Maj Gen (retd) CR Dutta, commander of sector-4, said those who worked against the liberation forces, including Jamaat, must face trial now.
Former army chief, Lt Gen (retd) Harun-ur-Rashid said, “Jamaat leaders' claims now have once again proved how important it is to make them face court.”
Commander of sector-8 Lt Col (retd) Abu Osman Chowdhury condemned the Jamaat claim saying, “A thief never admits he is a thief. So, Jamaat leaders must be brought to justice."
"We tried former Jamaat chief Golam Azam at the people's court (gono adalot), we also formed national people's inquiry commission headed by poet Sufia Kamal that found a large of Jamaat leaders' involvement in anti-liberation activities.”
Abu Osman said “Nizami ( Jamaat chief Matiur Rahman Nizami) was commander of Al-Badr and Mojaheed was its Dhaka unit chief.”
“They (Jamaat leaders) dare to make false claims because of the silence of the nation's top political leaders, ” he said. “Their claims only prove how big liars they are.”