Swaying and headbanging with Habib and Fuzön 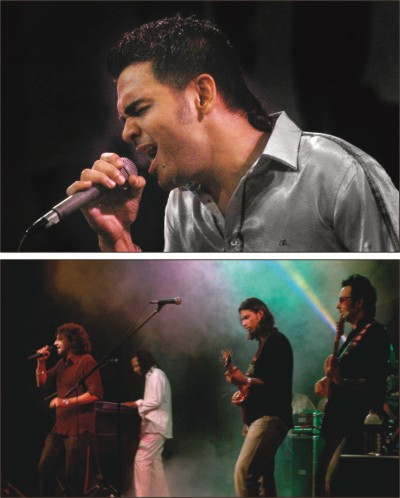 May 29: The concert kicked off on a laid back note. As composer-musician extraordinaire Habib declared, the mood was romantic, and it doesn't get mushier than "Hridoy-er kotha" (from the "Hridoy-er Kotha" soundtrack). It was a good start. The audience, comprising mostly youngsters, started swaying and humming along with the star musician at Winter Garden, Dhaka Sheraton Hotel.
As the artiste warmed up, so did his fans. With "Tumi bhuley jeona amakey," more whistles and 'wah wahs' were heard. Habib then took it up a notch with more sugary pop -- "Keno emon hoy" and "Bhalobashbo tomaye"; it could've easily been mistaken for a Valentine's Day special. Teens and tweens went wild.
To the relief of those in the audience who craved "real" music, the artiste performed "Krishno" (written and originally composed by Shah Abdul Karim), his claim to fame. Vocal prowess is perhaps not the artiste's strong suit but he seemed to be on top of his game at the show. One particular musician accompanying Habib who must be mentioned, is Jalal. The flutist created a total ambiance (and then some). When the flute dukes it out with vocals for the limelight, the audience is in music heaven. Its high time virtuoso musicians like him got solos.
Fusion of traditional Bangla folk music with contemporary techno and urban beats (mainly hip-hop, reggae, rap and electronica) is Habib's forte and he was totally in his elements as he performed the Hason Raja classic "Baula ke banailo rey."
Habib also sang his most recent smash hit "Didha" (from the "Third Person Singular Number" soundtrack) and the ever-popular "Din gelo."
Pakistani band Fuzön (pronounced 'fusion') took the stage next. With songs titled "Khamaj," "Malhaar" and "Madvanti," it doesn't take a seasoned connoisseur to figure out that the band's area of interest is North Indian classical music. That's how Fuzön describes its music: union of classical and contemporary rock music. Over the last few years, the band's popularity has transcended the borders of Pakistan. Though, Fuzön is quite regular in the Indian music scene, this was the band's first live performance in Bangladesh.
With Shallum Xavier on the guitar, Imran Momina (aka "Emu") on keyboard and Rameez Mukhtar on the mic, the band received a warm response from the Dhaka audience as it performed "Neend na aaye (from the band's second studio album "Journey").
As Mukhtar took on the song "Tere bina" (from Fuzön's debut album "Saagar"), Shafqat Amanat Ali was missed. Ali (the previous lead vocalist of the band), with his impeccable base in classical music, was the driving force behind the band's burgeoning popularity in the initial phase.
After performing "Suna suna" (from "Journey"), the band did a cover of the Nusrat Fateh Ali Khan classic, "Kinna sona tenu Rab ne banaya." Mukhtar seemingly demonstrated his singing chops with the powerful song, laced with brief 'alaap.'
As an endearing gesture, the band decided to perform a Bangla song. Why they chose the Bappi Lahiri kitsch, "Chirodini tumi jey amar" is a total head scratcher though.
The event was presented by MACOMM. Rtv and Radio Foorti were media partners.