End of the dollar era 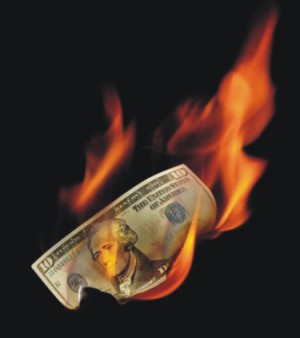 CONFRONTATIONAL words have recently been exchanged between the United States and China over their respective currencies. During Mr. Geithner's confirmation process as the new treasury secretary, in a written reply to a question raised by Senator Schumer from New York, Geithner said: "President Obama, backed by conclusions of a broad range of economists, believes that China is manipulating its currency."
This brought a quick response from China. Mr. Zhou, the governor of China's central bank, insinuated that China might want the US dollar to be replaced by a new "super sovereign reserve currency," called SDRs, as the world's reserve currency, i.e., to move to a global reserve currency with a stable valuation benchmark that will not belong to any single nation.
Even though, since then, both sides have toned down their confrontational language serious doubts about the sustainability of the US dollar as the world's predominant reserve currency in the future have been expressed by some experts.
Thanks largely to the profligate spending habits of the Americans, China has built up huge trade surpluses over the last decade. At the same time, there have also been substantial inflows of foreign capital. As a consequence of these two phenomena, billions of dollars have flooded into the country during this period.
Under a floating exchange rate system the value of China's currency would have risen, making its exports more expensive. China's exports would therefore, have declined.
On the other hand, for the same reason, imports would have become cheaper and therefore would have risen. But in order to continue with the export-based economic development of the country, China pursued a policy of keeping the value of its currency as low as possible. To achieve this objective, China often intervened in the foreign exchange market.
American consumers became addicted to China's cheap products and China became dependent on America's over-consumption to finance its rapid industrialisation. Thus, the trade gap between the US and China kept growing. In the process, China also piled up a huge amount of American currency. Now the Chinese leaders were faced with a problem: What to do with the mounting pile of dollars?
Besides buying and stockpiling commodities like iron ore, crude oil, grain, gasoline, diesel and sugar, which are priced in dollars, China has been using part of its stockpile to increase its gold reserves (recently published statistics show that Chinese gold reserves have grown to 1054 tons from 600 tons in 2003). But most of its stockpile of dollars was used to satisfy America's ever-increasing addiction to debts (budget deficits, bank bail-outs etc.) by buying up different types of US government bonds. Thus, China turned itself into America's largest creditor.
After the recent sub-prime mortgage meltdown in the US, the Chinese have been concentrating more on US Treasury bonds by getting rid of the debt of US government-sponsored organisations like Fannie Mae and Freddie Mac and buying more Treasuries. The result has been a huge stockpile of US Treasury bonds -- nearly $2 trillion -- in China's hands.
Actually, the size of China's dollar holdings has become a major problem for both the governments. If China feels that it is becoming too risky to lend any more money to the US government and cuts back drastically on its purchases of US treasury bonds, it would cause the interest rates in the US to rise -- delaying the economic recovery of the country and perhaps that of the world.
On the other hand, China has found itself in a catch-22 situation. It wants to maintain the value of its dollar investments steady and lower its dollar exposure but, at the same time, wants to keep the value of the yuan as low as possible. But as long as China runs a big current account surplus its reserves will rise. In order to keep the value of the yuan low, a significant part of its reserves will be kept in dollars. If it wants to reduce the size of its dollar holdings by selling part of it, it will cause the value of the dollar to fall, which would in turn cause a huge capital loss for China.
This extraordinary situation has led many experts to wonder how long the dollar will be able to maintain its position as the world's major reserve currency.
As Prof. Kennedy of Yale University has pointed out: "The United States possesses around one-fifth of the world's GDP, but its own paper provides around75% of world's exchangeable currency reserves. This is a worrying imbalance, especially when Washington is relying upon foreigners to cover its enormous federal deficits. This is an obvious capitalist contradiction -- that is, when the national forces of production differ so markedly from international shares of tradable currency, something is going to crack. And that something will be the latter."
I tend to agree with Professor Roubini, one of the very few American economists who saw through the bubbles and predicted the crisis long before the actual meltdown, when he says: "While the dollar's status as the major currency will not vanish overnight, we can no longer take it for granted. Sooner than we think, the dollar may be challenged by other currencies, most likely the Chinese renminbi."