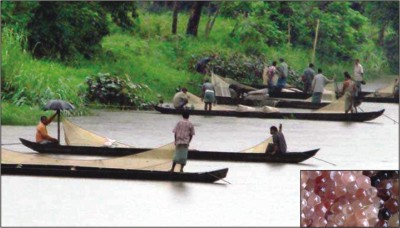 Fishermen yesterday started collecting fertilised eggs, locally known as swarna renu (gold sperms), released by indigenous species of carps including ruhi, katla, mrigel and kaliboush at the country's premier fish spawning centre of Halda River in the district yesterday.
The fishes started release of the fertilised eggs in Halda River, mostly in a two-km stretch of the river from Keramtoli to Sonairchar of Garduara, at around 3:00am and the process continued till noon.
The Halda flowing through Raozan, Hathazari and Fatikchhari upazilas wore a festive as several thousand local people in over five hundred boats became busy in collecting the eggs.
Collection this time has been much higher than last year.
During the Bangla months of Baishakh and Jaishtha (April and May), fishes like ruhi, katla, mrigel and kaliboush start migration from Karnaphuli, Matamuhuri and Sangu rivers to the spawning centre at the Halda.
In congenial weather during the dark fortnight or full moon, particularly at the first shower of the monsoon, they start releasing fertilised eggs at suitable places in 10-km stretch from Satterghat to Madunaghat of Raozan upazila.
The quantity of spawns might be around 250 kg against 70 kg of last year, but the exact quantity would be known after four days, said Monjurul Kibria, an associate professor of zoology at Chittagong University, who is conducting a research on the spawning at the Halda.
“Over 500 boats were engaged in collecting the eggs and each boat collected four to five buckets of eggs,” he said.
“I got some 25 to 30 buckets of spawns,” said Kamaluddin Sawdagor, a local of Garduara who engaged six boats for the spawn collection.
The awareness campaign against illegal netting might have helped the increased collection, said District Fisheries Officer Md Serajuddin.
Sources, however, said the collection of fertilised eggs and production of fries would be higher if illegal netting of mother fishes is totally stopped and the hatcheries are provided with necessary support in hatching the eggs.