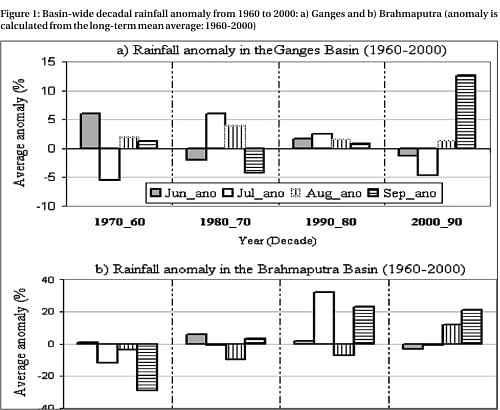 The Ganges-Brahmaputra-Meghna (henceforth, GBM) river system is the third largest freshwater outfall to the world's oceans. The Ganges and the Brahmaputra fall in a number of countries in the South Asian region, including China, India, Nepal, and Bangladesh. Of these China contributes solely to the flow of the Brahmaputra, and Nepal to the flow of the Ganges. These two rivers often overflow during the monsoon months, and the flow reduces dramatically in the dry season. The region therefore faces two major hazards: floods during the monsoon and scarcity of water during the dry season. These hazards become more pronounced in the downstream regions particularly in Bangladesh.
Increasing population and accelerating economic development activities in the basin of the Ganges and the Brahmaputra river system have now made the sustainable water management of the region even more critical than in the past. The sharing of water resources has long been a matter of dispute among the four co-basin countries. This has been the hydro political bone of contention in the region for more than three decades, and because of geographical location, Bangladesh faces the most contentious water issues. In terms of overall water resources requirement for the region, the Ganges has abundant water resources if its total annual flow is considered. The main problem is water scarcity during the lean season, from January to April, which affects both India and Bangladesh. The situation is particularly critical for Bangladesh as about 80 percent of its annual fresh water supply comes as transboundary inflows through 54 common rivers with India.
The effects of climate on hydrology in Tropical Asia would have many facets. In the Himalayas, the storage of precipitation in the form of snow and ice (in glaciers) over a long period provides a large water reservoir that regulates annual water distribution. The majority of rivers originating in the Himalayas have their upper catchments in snow-covered areas and flow through steep mountains. If there is any climatic variability in the Himalayas the impacts could be felt in the downstream countries -- that is, India and Bangladesh. By and large, dry-season flow in the major Himalayan rivers in a given year results from the monsoon rainfall of the previous year. If there is any climatic change in the mountain hydrological regimes, it is likely to alter these resources, and severely affect Bangladesh that depends on this water resource.
Bangladesh has a sub-tropical monsoon climate. The main rainy season occurs during the southwest monsoon from June to September Rainfall is heavy, frequent, and reaching 1500-2000 mm during this period. Rainfall averages 2160 mm per annum of which 1728 mm falls during the monsoon. The distribution of rainfall demonstrates a distinct seasonal regime and gradual increase from west to east. Thus the total rainfall at Jessore, a typical station for the less wet western region of Bangladesh, is only 1600 mm; it increases to about 2000 mm in Dhaka, and to over 3200 mm in Sylhet of the wet north-eastern region. Rainfall in the period September-November is less regular. At this time, the rain is usually brought by tropical cyclones from the Bay of Bengal, which can be severe, bringing torrential rain and very strong winds.
From the decadal trends in the rainfall variability in Bangladesh, it has been observed that there are some atmospheric and climatic changes undergoing in the hydro-meteorological system in the GBM river system. Changes in the length of the monsoon are significant and increased precipitation in monsoon generates additional volumes of runoff. Also, the southwest monsoon arrives later or withdraws earlier, so soil moisture deficits in some areas (especially in Ganges basin) is getting worse; prolonged monsoons are also contributing to more frequent flooding and increasing the depth of inundation in many parts of Bangladesh (1998 flooding for an example). Observations revealed that significant deviation of monthly rainfall from one decade to the other occurred.
It can be stated as an example that in the Ganges basin the June rainfall in 1970-60 displayed positive anomaly (i.e., higher rainfall than the average), which now shows negative anomaly (i.e., lower than the average) in the recent decade 2000-90 (Fig. 1). It has also been observed that, as compared to 1970-60, there is a considerable increase (10-15%) of September rainfall in the recent decade. All other monthly deviations are noticeable too. Rainfall in the Brahmaputra basin also displayed similar trends. The percentage of August-September rainfall, as compared to 1970-60, has significantly increased in the recent decades. Other months displayed considerable variations too.
Therefore, some atmospheric and climatic changes in the hydro-meteorological system in the Ganges-Brahmaputra basin system in Bangladesh are very distinct (rainfall anomaly in the Meghna basin is not reported here). These findings show that the variations of total seasonal rainfall, the timing of onset, peak, and recession, are changing considerably at a dramatic pace.
Factors related to climatic and human induced interferences are hypothesized to be responsible for these changes. If preventive measures are not taken immediately, these changes will have serious impact on the livelihood of the people in the lower riparian countries like Bangladesh.
Dr. Rashed Chowdhury is Research Scientist and Faculty of the University of Hawaii, USA, primarily responsible to develop applications-oriented information on climate variability and change for the Asia-Pacific region.