Over 140 Taliban killed in Swat offensive 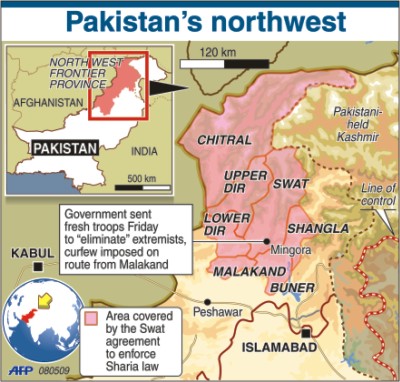 Pakistan said yesterday an air and ground offensive to crush the Taliban in the northwest killed more than 140 militants and seven soldiers in an escalating conflict that has displaced hundreds of thousands.
Warplanes bombed rebel hideouts in the Swat valley, an ex-ski resort, where up to 15,000 security forces are deployed under orders to wipe out extremists branded by Washington as a terror threat to the West.
"The army is now engaged in a full-scale operation to eliminate miscreants," military spokesman Major General Athar Abbas announced.
"During the last 24 hours approximately over 140 militants have been killed in different areas," he said. Seven soldiers had also died, he added.
About 143 militants were killed in Swat while in the neighbouring district of Buner six were killed. People fleeing the area, however, have accused the military of also killing civilians in the fierce bombardment.
It was impossible to confirm the death tolls independently, given ongoing operations across three districts which began late last month when the hardline insurgents advanced to within 100 kilometres (60 miles) of Islamabad.
The UN refugee agency has warned up to one million people have been displaced in northwest Pakistan, with tens of thousands streaming out of Buner, Lower Dir and Swat, registering in camps or sheltering with families.
"The provincial government estimates between 150,000 to 200,000 people have already arrived in safer areas of North West Frontier Province (NWFP) over the last few days," UNHCR said in a statement.
It said another 300,000 were "already on the move or about to move".
Those fleeing the latest escalation of hostilities join another 555,000 previously displaced Pakistanis who fled their homes in the tribal areas and NWFP since August 2008 and are already registered, the agency said.
Bedraggled refugees flooded out of Swat, some on foot leading goats and cattle, others crammed into cars with bags, blankets and bundles of clothes.
A teacher joining the convoy of refugees fleeing Swat's main town of Mingora said it was completely under Taliban control.
"Whenever I see jets and helicopter gunships, I see death hovering overhead," said Zubair Ahmed, a teacher escaping on foot from Mingora with eight members of his family.
"Mingora is totally under Taliban control. They are roaming the streets with mortars and kalashnikovs. There are no security forces in sight anywhere."
The fighting has sunk a controversial February deal between the government and an Islamist hardliner that aimed to put three million people under sharia law in a bid to end a Taliban uprising. Islamabad is now saying it will fight to the end.
Fighter jets pounded militant hideouts in the towns of Matta, Kabal and Khawazakhela in Swat district after a night of intense gunfire in those Taliban bastions, a local military official said.
Abbas told reporters the military was battling 4,000 militants in the Swat valley, including Uzbeks and Tajiks who may have crossed the porous border from Afghanistan, which is also battling a Taliban uprising.
The full-scale offensive was launched after Prime Minister Yousuf Raza Gilani late Thursday appealed for unity against extremists whom he said were risking the sovereignty of the nuclear-armed nation and violated the peace deal.
He said the armed forces had been called on "to eliminate the militants and terrorists" to restore the "honour and dignity of our homeland."
President Asif Ali Zardari, in Washington for talks aimed at quelling the chronic unrest that has alarmed the United States, vowed military operations would last until "normalcy" had returned to Swat.
"It's a regional problem, it's a worldwide problem," he said after meeting key Congressional leaders urgently trying to complete a 7.5 billion-dollar aid package to shore up the weak civilian government.
US President Barack Obama has placed Pakistan at the heart of the struggle against Al-Qaeda, and has branded extremists in the northwest as the biggest terror threat facing the West.
Critics said the February deal emboldened the Taliban, and have welcomed the renewed military offensive, which also has broad public support.