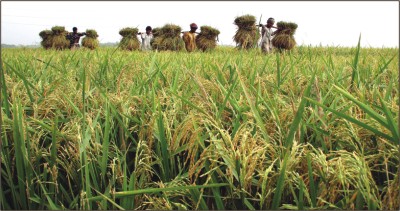 The gap between supply and demand for quality seeds to cultivate rice remains wide, although more than 100 seed companies are in operation now. Companies are investing a huge amount to introduce their own hybrid seeds, and storage and processing centres.Photo: Syed Zakir Hossain

Seed business is thriving in the country backed by a number of corporate biggies who came up to grab a slice of around Tk 1,000 crore market for hybrid and high-yield seeds.
In the recent years more than half a dozen conglomerates such as Ispahani, Energypac, Square, Paragon, Getco and Northern signed up for the business, with Partex being the latest entrant to take hold of a portion, riding on the present supply shortage of quality seeds.
The existing old players such as Supreme Seed, Brac, Lal Teer, ACI and Aftab are consolidating their positions by concentrating on developing both backward and forward linkages such as investment in research and development (R&D) to introduce their own hybrid seeds, and storage and processing centres.
“We want to take the supply shortage of quality seeds as an opportunity,” said Mokhlesur Rahman, executive director of Partex Agro, a concern of Partex Group.
Partex made its debut in November 2008 in seed business as the demand and sales of high-yield seeds, including hybrid ones, are on the rise, spurred by the existing companies' marketing campaign and the government support that almost doubled in the last three years.
In fiscal year (FY) 2006-07 over 5,000 tonnes of hybrid rice seeds were used to cultivate around 3.90 lakh hectares of land. So far in the current FY, the quantity of hybrid rice seeds used in around 8 lakh hectares is around 11,000 tonnes.
However the gap in supply and demand for quality seeds remains wide although more than 100 seed companies are in operation now.
Industry estimate shows that the demand for quality seeds stood at more than 11 lakh tonnes in FY2007-08, but both the private and public sector seed firms could supply 2.10 lakh tonnes. The rest were met either by farmers or importers, according to a publication released during the Seed Fair 2009.
“We want to produce quality seeds locally. We have already invested more than Tk 3 crore in R&D as part of our goal to produce seeds here,” said the Partex Agro official.
“We are also looking for some 'short duration' hybrid varieties to help farmers harvest early. We aim to introduce some aromatic rice varieties either,” he said.
Currently local production of high-yield seeds by public and private sector organisations remains very low.
According to agriculture ministry officials, out of the total of 11,000 tonnes of hybrid rice seeds used in the outgoing Boro season, only around 2,500 tonnes were produced locally and the rest were imported mainly from China and India.
The price of a kilogram of hybrid rice seeds at domestic market stands between Tk 180 and Tk 210.
Besides the shortage, tax and duty benefits for local production and imports have also encouraged companies to enter the market.
“The market is growing every year. Presently the market size is around Tk 1,000 crore but we can meet as much as Tk 300 crore of the market demand,” said Mohammad Masum, chairman of Supreme Seed Company.
“We welcome the entrants. But the days for short-term business are over. It's time for those who are coming with a long-term vision,” he said. "But the overall growth of the market depends on how much of the rice land will be used for hybrid rice cultivation."
Officials said there is no projection on how much of rice land the government wants to bring under hybrid rice cultivation, but expected that hybrid rice cultivation area would increase in the days ahead to ensure food security against the backdrop of declining arable land.
To survive in the business, Masum stressed investment in R&D. “You will have to concentrate on developing your own hybrid variety through R&D. Unless you have your own variety, it's tough to sustain,” said Masum whose company has developed its own hybrid variety, Hira 5, and invested in building its own storage and processing centres to preserve around 1,500 tonnes.
Himadri Kumar Saha, in-charge for seed and agri division of Ispahani Foods, a concern of Ispahani Group, said the company has started production of vegetable seeds.
“We already invested around Tk 12 crore in the last two years,” he said, adding that the company, apart from focusing on R&D, attempts to build stores and processing centres.
Other conglomerates like Square are yet to start operation in full swing in the rice seed segment. But the company now produces and markets certified seeds of potato, an official of Square said.
FH Ansarey, executive director of agribusiness division of ACI, also welcomed entry of new companies, saying that it would help expand the market, benefit the farmers and enhance efficiency.
"We are going for massive expansion to produce both the high-yield varieties and hybrid seeds locally. We have also built infrastructure to support expansion,” said the official of ACI, which aims to triple its hybrid rice seed production to around 600 tonnes this year from around 200 tonnes last year.
sohel@thedailystar.net