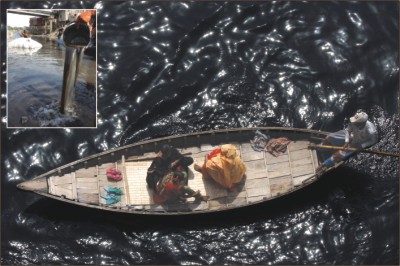 POISONED BURIGANGA…A boat carries passengers, top, on the murky waters of the Buriganga. Wholesale dumping of industrial waste, sewage and garbage left the river, touted the lifeline of the capital, in this sorry state. The photo was taken from Bangladesh-China Friendship Bridge-2. Inset, the photo taken at Lalbagh shows the filthy water of the Buriganga.Photo: STAR

Soft attitude of the government towards polluters and lack of awareness among city dwellers have literally left dead all the rivers and other surface waters in and around the capital.
Over the years the government agencies conducted small-scale drives against the polluters without yielding any major success. The polluters have meanwhile continued polluting the rivers side by side with city dwellers linking excreta discharge to the storm sewerage that ultimately falls into the rivers.
The immediate past caretaker government had earlier directed industrialists to install Effluent Treatment Plants (ETP) at their respective industries by October 31, 2007. But most of the industrialists defied the directive and the government also did not go for action against the violators.
Even the Department of Environment (DoE) does not know exactly how many of the industries have ETPs installed.
"Some industries set up ETPs but don't use those as they need to spend additional money to treat their water," says a DoE inspector.
According to a study jointly conducted by the World Bank and the Institute of Water Modelling (IWM), there are over 300 various effluent discharge outlets from nine major industrial clusters including Tongi, Hazaribagh, Tejgaon, Tarabo, Narayanganj, Savar, Ashulia, Gazipur and Ghorashal.
Of these, 19 outlets carry the major discharge of domestic and industrial waste.
Of the discharged untreated liquid waste, 61 percent are industrial and 39 percent domestic waste, the study shows. The lone Sewerage Treatment Plant (SWP) in Pagla in Narayanganj can treat only 10 percent of the industrial waste.
The primary estimates made in this study show that nearly 330,000 kilograms of BOD is discharged from various polluting sources every day in Dhaka watershed.
"This gives an indication of the extensive pollution loads from various domestic and industrial sources. The situation is extremely precarious particularly during the six months of the year from November to April," the report states.
Over the last 10 years major industrialisation in the Dhaka watershed has been observed, especially in dyeing, washing and textiles sectors. It is estimated that there are over 7,000 industries in Dhaka metropolis located mostly in three clusters -- Hazaribagh, Tejgaon and DND area.
According to statistics from DoE, the number of polluting dyeing mills is 365, tanneries 198, pharmaceutical units 149, engineering workshops 129, chemicals and pesticide factories 118, jute mills 92, rubber and plastic units 63, food and sugar 38, paper and pulp 10, cement and fertilisers five each and distilleries four.
However, the real number is much higher than the statistics, and among all these the dyeing factories and tanneries are the main polluters of the rivers.
Asked why the industries don't use ETPs even if they have it, a DoE chemist explains the reason. He says, "If a dyeing factory produces one tonne of cloth, it discharges 100 cubic metres of liquid waste equivalent to 100,000 litres of water.
"A factory needs to spend Tk 300 to Tk 400 to purify one cubic metre of water excluding electricity and manpower costs.
"They just don't want to spend that money," the DoE chemist says.
Waste from these industries is connected to the sewerage system that directly leads to the rivers around the city. In fact, the rivers have become a dumping ground of all kinds of solid, liquid and chemical waste of bank-side population.
According to the Environment Conservation Rule, 1997, every industry should have an in-house ETP. Otherwise, they would not get from DoE the environmental clearance, which is mandatory to obtain power and gas connections.
Mahmud Hossain, owner of a washing plant in Gazipur, said their industry generated 150 cubic metres of waste water every day.
"We need to spend Tk 8-10 lakh per month for lime, poly electro lime, polly aluminium chloride and polly electro chloride to treat the waste," Mahmud added.
"If we are honest we can treat the wastewater before discharging and even make profit from the business," he commented.