Take back the streets 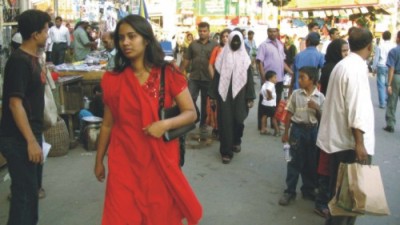 I have every right to walk the streets.Photo: STAR

PULl up the hood of your rickshaw," I heard for the hundredth time. It was a very nice day, with the wind blowing, and the sun making occasional appearances. But the hood of the rickshaw had to be put up. After all, I had to 'hide' myself from the numerous gawking eyes that always followed me throughout the journey from Mohammadpur to Elephant Road, where I went to study my A-levels.
Out of sight of my parents, I would always pull down the hood, and unfortunately pairs of eyes of all ages would look me up and down as if I was an exhibit in an art gallery. Then, depending on the vulgarity of the yelled comment, I would have to decide whether to keep the hood down, or give up and put it back up.
I liked keeping the hood of the rickshaw down. Being taller than the average, I either banged my head on the walls of the hood or had to stoop really low if it was up -- it didn't work for me. But if one decided not to conform to the norms, we had to suffer the consequences. In this case the jeering and leering of random men.
Another place where you had to suffer the consequences of venturing out was Chadni Chowk. In the Chowk, shopping had to be done shoulder to shoulder, literally. What heaven that was for the groping gender! It came from all directions, aimed at all parts of the female anatomy. This was before the arrival of shopping malls, where there is actually some space between shoppers, making groping more difficult.
My first recollection of groping was in my early teens. My mother was trying to negotiate a particularly difficult path between a hot jilapi frying pan and a mud puddle. A 'nice' young man came in and addressing my mother as 'aunty' he very gallantly produced a little path, which my mother could walk through.
The gallantry of this young man didn't stop there. He followed us in what initially seemed like an attempt to make sure we faced no further obstacles. Suddenly from behind me his hands protruded from his body like little tentacles and landed on different parts of my body. I was frozen in fear. He finally left, leaving me feeling violated and debased.
I never summoned up the courage to tell my mother. She could have helped me. Perhaps. But I was still reeling from the memory of the anonymous phone call from not so long ago. I was getting ready to go to a friend's house. It was a rare treat, so I put on my favourite clothes -- a denim skirt and a t-shirt. My mother took me aside and told me I would not be able to wear these clothes anymore. My 13-year-old eyes stared at her blankly. She told me an anonymous male had been calling my parents up lately and told them that if I continued to wear 'Western' clothes I would be 'stripped' on the streets as punishment.
Flushed with humiliation, I didn't know whether I was supposed to think that it was something I had brought upon myself or not. But from then on, I never told anyone when I was harassed. Not when I was whistled at on the street, and certainly not when my own cousin (15 years older than me) made his own advances in the protected walls of our home. I just wished it would stop.
A turning point in my attitude came at a concert at Dhaka's Army stadium. I was there with my friends Jafar and Masum, enjoying listening to our favourite musicians. After the show ended, there was a rush towards the gate of hundreds of people. We had presumed two male companions would be enough for my security. We had misjudged. A hand came flying out of nowhere and groped at me. I screamed and turned around to see who it was. Everyone was a possible offender. I gave up. Outside the stadium I waited for my transportation home, when another hand touched my leg. This time I was ready and followed the hand to the person. I grabbed the collar of his shirt and gave him an earful and a fistful.
I've learnt the hard way to fight 'eve-teasing,' or more specifically sexual harassment. Now I always pull down the hood of the rickshaw (except when it rains which is the real purpose of the hood). If anyone tries to harass me, I shout back at them and let everyone know.
It is not my shame. It is his. If anyone stares at me, I stare back. I've discovered that there's nothing more unsettling for a man than to have a woman stare back at him. I walk, cycle and just stand on the roads that are as much mine as any man's.
Hana Shams Ahmed is Assistant Editor, Forum.